Crime down across MBTA 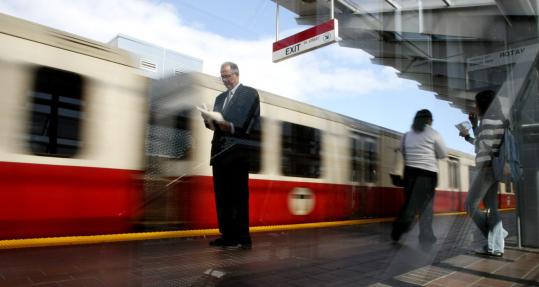 Crime on the MBTA has dropped sharply, falling to the lowest level in at least 30 years, even as near-record numbers of people are riding the system’s sprawling network of buses and trains, according to the MBTA Transit Police.

There were no homicides on the transit system last year, and the number of aggravated assaults, larcenies, and robberies also fell, MBTA officials said. The crime rates on the MBTA mirror a national trend in which crime has decreased in many cities and towns. In Boston, police last year reported 49 homicides, the lowest number of killings since 2003.

“I think what you’re seeing now is a much greater commitment by the MBTA and the Transit Police to address the concerns of the community and the passengers,’’ said Transit Police Chief Paul MacMillan, who attributed the decrease to video surveil lance, public awareness campaigns that urge people to report suspicious activity, and a crackdown on fare jumpers, who are often also associated with other crimes.

On any given weekday, an estimated 1.2 million people use the Massachusetts Bay Transportation Authority’s subways, buses, trains, and boats to travel throughout Greater Boston. Last year, about 361 million people used the transit system - a number topped only in 2008, when a spike in gas prices prompted a record high number of people to use public transportation.

Despite the high number of riders, crime rates are at the lowest level since officials began keeping complete statistics three decades ago.

“That’s a pretty staggering statistic when you look at the number of people we transport every day,’’ MacMillan said.

Around the T yesterday, passengers interviewed said that the statistics about falling crime felt true to them.

“I never see anything happen,’’ said Brandon Kinkead, 19, who takes the Orange Line daily from Forest Hills to get to the Kaplan Career Institute in Charlestown. “You don’t hear about things happening like you used to.’’

At the JFK-UMass station in Dorchester, Hung Ong, 22, said public awareness campaigns have made him feel better about his daily commute on the Red Line. He pointed to the loudspeakers that periodically boom warnings passengers to report suspicious activity.

“It actually makes me feel safer,’’ Ong, a student at the University of Massachusetts Boston, said of the messages. “That means a lot of people are watching their surroundings, not just one.’’

In recent years, the MBTA faced several high-profile shootings, assaults, and killings, particularly on subways and buses, that made safety in the system a public issue.

In 2003, a woman who was 8 1/2-months pregnant was shot when a gunman missed his intended target, a rival gang member, and struck her in the abdomen. The woman survived but the baby died after it was delivered. In March, 2007, an 18-year-old man was fatally shot in the head on a bus going through Dorchester at a time when schoolchildren were heading home. On New Year’s Eve in 2008, a 16-year-old boy was stabbed to death on an MBTA bus rumbling through Mattapan.

The MBTA, like other public transportation agencies that oversee subway systems, has also grappled with how to combat groping - a form of indecent assault. The T said the number of indecent assaults rose from 44 in 2007 to 69 in 2008, but dropped to 60 in 2009, and MacMillan said police made arrests in 38 percent of the incidents.

MacMillan said the MBTA has adopted a number of approaches to battle crime, including the crackdown on fare jumpers, which he described as part of a strategy known as “point of entry policing.’’ On average, one out of 10 people stopped for fare evasion has an outstanding criminal arrest warrant pending, he said.

MacMillan said he remains concerned about the rate of robberies on the T, even though the overall number fell 9 percent in 2009, to 189. Robberies, which are different from larcenies because there is a direct confrontation between the victim and the thief, increase whenever an expensive electronic device, such as the iPhone or the Sidekick, enters the market, he said.

“The robberies are a concern for us because it’s a violent crime,’’ MacMillan said. “People need to know these items are valuable and to safeguard them when they’re on the T.’’

Passengers said they try to remain alert to possible crime.

Leyinska Berbere, a 22-year-old junior at UMass-Boston, said rude passengers who shove, push, and swear are a bigger problem than crime. Still, she said, she holds her cell phone close to her when she is on the train.

“I ride mostly in the daytime,’’ Berbere said. “I tend to avoid nighttime.’’

And Kinkead, the Kaplan Career Institute student, said he has had to be wary of other passengers who stare greedily at the jewelry he likes to wear.

“Can’t sleep,’’ he said. “I just sit back and relax and peek at everything around me so I know what’s going on.’’

Alice Phoenix, who also uses the Orange Line, said the only trouble she faces is from intoxicated passengers. Those people who express fear about riding the transit system are usually people who don’t use it, said Phoenix, a 46-year-old from Jamaica Plain who works in human resources at a large downtown financial firm.