Organization in Haiti focuses on rebuilding 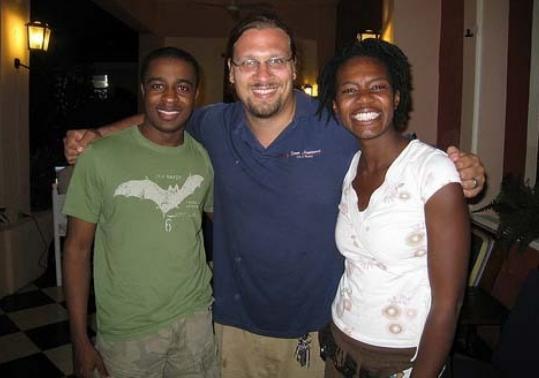 Peter Haas (center), standing with his wife, Catherine LainÃ©, and a colleague, Sakis Decossard, is executive director of Appropriate Infrastructure Development Group, based in Haiti. The organization is looking beyond the immediate effects of the earthquake toward the rebuilding.
By James F. Smith Globe Staff / January 22, 2010

A Massachusetts man who runs a nonprofit organization in Haiti’s second-largest city says it is not too soon to start thinking about how Haitians should rebuild once they get through the initial earthquake disaster.

Haas, who grew up in Weston, and his Haitian-American wife, Catherine Lainé, have helped Haitians employ simple, environmentally sensitive technology to improve the quality of life in their communities around Cap Haitien, the port city on the northern coast of the island, since 2007. Their organization also works in Guatemala. They live in Providence, RI.

From clean communal latrines to biogas cooking stoves, the group has worked to foster the creation of small businesses in Haiti that use such appropriate technology. The group offers local entrepreneurs grants and loans, along with help with business plans.

Bill Clinton, in his role as United Nations envoy to Haiti, included Haas in a group of nonprofit leaders whom he acknowledged in November at an event sponsored by the Clinton Global Initiative. Others on the stage included Dr. Paul Farmer of Partners in Health, now Clinton’s deputy envoy to Haiti.

Since the earthquake, Haas has helped manage the flow of displaced Haitians arriving each day in Cap Haitien from Port-au-Prince, the capital and quake epicenter. Haas has also helped identify and deploy structural engineers to hard-hit areas. He is working with several stove makers to get efficient stoves to the hardest-hit areas.

In a telephone interview, Haas warned that victims of the earthquake are fanning out from the capital to smaller centers across the country, raising the potential for problems beyond Port-au-Prince. To avoid a long-term refugee crisis, he said, the central government and its international supporters must help not only victims in the capital but those who have fled elsewhere.

Haas estimated that several thousand people a day are arriving in Cap Haitien from the capital and are largely left to fend for themselves.

“I think the immediate concern is intake and tracking [the displaced] for support,’’ he said. “Then they can be moved to temporary shelters and more permanent residences.’’

He sees ways to combine the postquake relief work and the longer-term rebuilding. For example, he has been talking with a Virginia company called Shelter 2 Home that builds prefabricated shelters designed to serve as a refuge in a crisis and then be improved to become a permanent house.

“I think we have an opportunity here to help start new companies that can address these housing stock problems,’’ he said. “Haiti is a market that innately stifles entrepreneurship with government bureaucracy and high costs of incorporation, and the venture capital market and small business loan market do not exist.’’

Haas, 34, graduated from Yale in 1998 and launched AIDG in 2005 in Guatemala with $800. Since then it has won funding from donors including the Echoing Green organization, which supports emerging social entrepreneurs.

Haas said that in the last year, AIDG has settled on formal methods for identifying entrepreneurs for the business incubation program, holding business-plan competitions that identify the most promising prospects.

“We are going to modify our business plan competition in the next round,’’ he said. “We’ll focus on water, sanitation and energy, and we’ll also include earthquake-resistant construction and getting better quality housing.’’

James F. Smith writes about Boston’s global connections. He can be reached at jsmith@globe.com. His blog is at boston.com/worldlyboston.

Correction: The original version of this article incorrectly said that Haas and Laine moved to Cap Haitien in 2007. In fact they work there and in Guatemala for part of the year, but they live in Providence, RI.