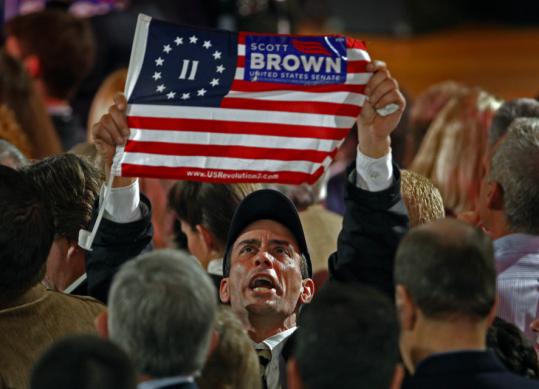 Kim Sinclair describes herself as an independent who often votes for Democrats and has never volunteered for a campaign. But yesterday at midday, she found herself standing in the bed of her black Chevrolet Silverado pickup in downtown Plymouth, an American flag flapping at her side, a Scott Brown cap on her head, waving a red-white-and-blue Scott Brown sign.

“We have to protect the United States of America,’’ Sinclair shouted as car horns beeped approval and a frigid rain fell. She explained that she was offended by Martha Coakley’s support for civilian trials for terrorism suspects and disenchanted by her support of health care reform. “Scott Brown would rather support the military than pay for all the lawyers of the Taliban,’’ she said.

Across Massachusetts, a surge of angry voters looking to upset the status quo flocked to the polls yesterday, despite rain and snow through much of the day, to cast ballots in an unprecedented mid-January special election to finish the term of the state’s longtime senator, Edward M. Kennedy, who died last August.

In scores of interviews at multiple polling places, Republicans, independents, and even some Democrats said frustration over health reform and anger with Congress had motivated them to vote for Brown, a Republican state senator whom few voters had heard of before this campaign.

The Brown voters outnumbered the many Democrats, who, facing the loss of a seat their party had held for decades, also flocked to the polls, transforming what many had expected would be a sleepy election day into an unusual scene, with lines at some precincts and the sort of numbers seen when voters turn out for regularly scheduled national elections.

“All the polling places are busy,’’ said Kathy Deree, an assistant town clerk in Weymouth. “They’re all asking for more ballots. This is the busiest election since the president’s.’’

More than 2.2 million voters, out of 4.1 million eligible, cast ballots in the three-way election between Brown, Coakley, and independent Joseph L. Kennedy (no relation to the late senator).

Lines formed at a polling place in Somerville, and traffic backed up at Bates Elementary School in Wellesley.

Brown’s supporters described the election as a shot across the bow of the administration of President Barack Obama.

“I’m trying to save the nation today,’’ said Robert Cappello, 69, of South Boston, a registered Republican who reveled in what he described as an “overwhelming sweep’’ for Brown.

“This election is a lot about sending a message,’’ Cappello said in an excited voice outside a polling place on H Street. “It’s telling Washington to slow down.’’

But Coakley’s supporters saw the election as an important opportunity to preserve Obama’s agenda. At St. George Orthodox Church in West Roxbury, Phil DiCarlo cast his ballot for Coakley and said he wondered how the Brown campaign had gathered so much momentum.

“It seems like people have short memories,’’ DiCarlo said. “They forgot about the last eight years’’ under former president George W. Bush.

Brown, a Wrentham resident and one of just five Republicans in the state Senate, had been seen as a longshot candidate. But he campaigned relentlessly, vowing to be the 41st vote Republicans need to block the health care overhaul measures now being advocated by congressional Democrats.

Coakley, a Medford Democrat who is the state’s attorney general, had been considered the overwhelming front-runner in the race, based on her years in elective office and her popularity in polls. She supports the health care overhaul and was endorsed by a raft of prominent Democrats, including Obama, who came to Boston to campaign with her last Sunday.

“I respect Martha Coakley and what she’s accomplished in her career, but I think she’s going to preserve the status quo,’’ said Rex Kidd, 48, of Natick. Kidd, the owner of a local masonry and paving company, said he voted for Brown because of his pro-business, conservative views.

“He is going to decrease my taxes and get rid of all the wasteful spending that Deval Patrick has done,’’ he said, referring to the governor.

At the Lodge of Elks in Quincy, where Brown supporters stood through the rain into the afternoon while Coakley voters left early, Ruth Faherty, a 25-year-old nurse, cast her ballot for the Republican.

“I think we need him in there to make more of a fight in the Senate,’’ said Faherty, who described herself as an unenrolled voter. “I think if there are too many on one side [of the aisle], it becomes lopsided.’’

In South Boston, Patrick Shaughnessy, 33, an independent voter, said he cast his vote for Brown because of what he called Coakley’s “entitlement attitude,’’ adding: “She didn’t really campaign. She wouldn’t debate him one-on-one. She just expected to win.’’

But Coakley had many supporters, as well. Outside Natick High School, Randy Divinski took a vacation day from his job at a nonprofit to clutch a Coakley sign in 30-degree weather.

“I am bothered by stealth Republicans who run as moderate,’’ said Divinski, 46. “We’ve just had eight years of screwball economic policies, and he wants to go back to that?’’

Melissa Gagnon, 22, a student at Bryant University in Rhode Island, drove back home to Weymouth to vote for Coakley yesterday when she heard the race was close.

“I just believe in her and like her stances a lot better than Scott Brown,’’ she said. “I think she’s done good things for Massachusetts. I always supported her.’’

Opinion
Senate race coverage
Your comment is subject to the rules of our Posting Policy
This comment may appear on your public profile. Public Profile FAQ