THIS STORY HAS BEEN FORMATTED FOR EASY PRINTING
Political circuit 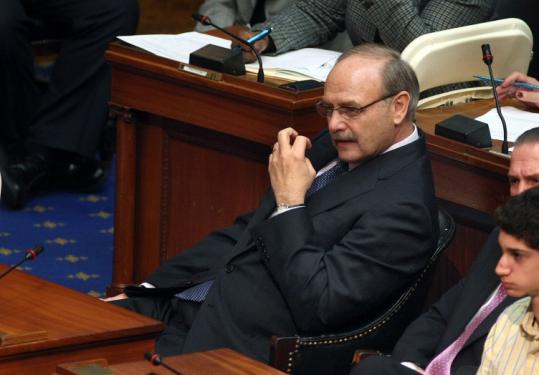 JOHN TLUMACKI/GLOBE STAFF
At the opening of the 2009 legislative session, Sal DiMasi watched the House roll-call vote on his reelection as speaker. (John Tlumacki/Globe Staff)
January 17, 2010

Students everywhere love assemblies - sometimes for the presentations, often because they simply get to get out of class. But the middle-schoolers at Florence Sawyer School in Bolton may be rethinking that one, after a recent morning visit from US Senate candidate Scott Brown that could rank as the downer assembly of the year.

Amid brightly colored banners that said “We are the world,’’ “Walk the path to your dreams,’’ and “Hop to it!’’ Brown spoke gravely to the adolescents about the “debt ceiling’’ and “unfunded mandates.’’ About a cap-and-trade plan that he said might force the school to lay off teachers or cut activities to pay energy bills. About the Taliban and Al Qaeda potentially joining forces to move on Pakistan and obtain nuclear weapons.

Then the truly cheery part began.

Brown, asked how he felt about the “Patriotic Act,’’ said he was happy to give up some personal freedoms to protect the country from attacks like the one a Sudbury man allegedly plotted on a local shopping mall, before being thwarted.

Brown stuck with the theme in asking the students to encourage their parents to vote for him.

“Tell your folks to get involved,’’ he said. “Be my little army. Be my young army of young people.’’

The Edwards Middle School, once an academic sore spot, has achieved what many state officials considered to be a promising turnaround, doing such things as extending school days. But as union officials point out, success has occurred without teachers sacrificing any rights under their union contract.

“It’s a very strong union school - active building reps and faculty,’’ said Richard Stutman, president of the Boston Teachers Union. “The teachers are determined on two fronts: to provide the best education for kids and make sure their work rights are adhered to. . . . We would have chosen same school to show how good collective bargaining and due process lead to positive change.’’

“However, we have tried to have longer school days where we didn’t have cooperation,’’ Joyce said. “This legislation will allow students from across the entire district to achieve the same kind of success as those at the Edwards.’’

Stutman disputed those comments, saying the union is willing to extend a union agreement for Edwards’s extended school day to all other schools - so long as the city is willing to pay teachers, like those at the Edwards, for the extra time.

Former House speaker Salvatore F. DiMasi’s legal troubles have not helped the image of politicians in Massachusetts. But they have definitely been a boon for members of the legal community.

Last year, even before his indictment on federal corruption charges, DiMasi spent more than $162,000 in campaign funds on his lawyer, Thomas Kiley. And the House of Representatives itself paid $378,000 to a lawyer who turned over documents subpoenaed by the US attorney’s office.

In a campaign finance report to be filed next week, DiMasi’s successor as speaker, Robert A. DeLeo, will report that he, too, ran up a big bill with his attorney, Robert Popeo, one of the city’s premier lawyers.

According to the records, Popeo’s firm charged DeLeo $64,000 for expenses incurred between December 2008 and June 2009.

According to Popeo, he helped DeLeo and the members of his staff respond to questions from state and federal investigators. They met with state police uncovering the alleged ticket broker scandal that has ensnared DiMasi’s friend and former financial adviser.

They also met with federal authorities looking into DiMasi’s connections to the software firm , which authorities allege paid him to help it secure lucrative state contracts.

“Anything that affects his reputation can be covered by his campaign fund,’’ said Popeo, explaining why DeLeo used campaign funds to pay his bills. “Can you imagine if he tried to bill it to the state?’’

Popeo wouldn’t disclose his hourly rate, saying only, “I am one of the most expensive lawyers in the city.’’

We realize all eyes are on Tuesday’s Senate race, but we couldn’t resist making this back-and-forth between the gubernatorial campaigns of Governor Deval Patrick and GOP challenger Charles D. Baker our Tweet - or Tweets - of the week.

Here’s the exchange between Baker, who was in the administration as the last major education overhaul was hatched, and Patrick’s campaign manager on the education bill that the governor will sign tomorrow.

“BakerforGOV: Wondering how many MA kids would have never gotten the education they deserve if Obama hadn’t pushed the Governor into pursuing ed reform.’’