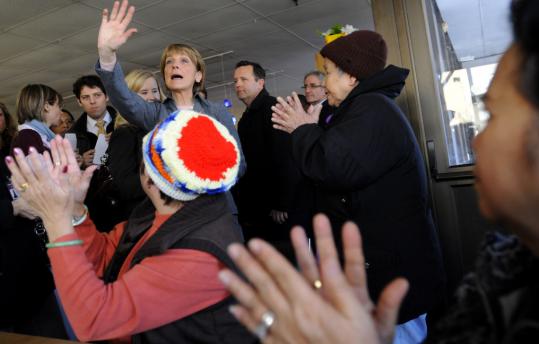 Democrat Martha Coakley worked the crowd yesterday at a Dorchester senior center, Republican Scott Brown toured a Chelmsford medical device facility, and the two US Senate rivals traded accusations in a once-sleepy election that has turned into a bitter battle with national political ramifications.

As the contest to replace the late Edward M. Kennedy in the US Senate reached its final days, many of the developments yesterday were dictated by outside interests pouring money into the race, rather than by the candidates themselves.

Former president Bill Clinton is coming to the Fairmont Copley Plaza tomorrow to stump for Coakley, while former New York City mayor Rudy Giuliani will be in town for Brown.

Coakley visited Kit Clark Senior Services yesterday, shaking dozens of hands, asking for votes, and delivering remarks through a Vietnamese interpreter. It was the type of retail politics that has generally been lacking in the abbreviated Jan. 19 special election, particularly for Coakley’s campaign, which has been more focused on ground operations and phone calls than shaking hands and kissing babies.

Since Coakley won the Democratic nomination, she has held 19 public events, according to a Globe review of her schedule. Brown, on the other hand, has held 59 events.

“Good morning, I’m asking for your vote,’’ Coakley said to one person in Dorchester, as aides passed out doughnut snacks. “You have my vote, don’t worry,’’ came the reply.

Another person told the candidate, “You are the sweetest woman in the world,’’ as Coakley smiled and moved toward the microphones.

Brown visited ZOLL Medical Corp. in Chelmsford, where the chief executive said his business would be hurt by additional tax burdens if proposed federal health care legislation, which Coakley supports, is approved.

Brown blasted Democratic efforts to overhaul health care and rejected Democratic descriptions of him as being in lockstep with the national GOP.

“The allegation that I vote 96 percent of the time with Republicans is inaccurate, but I’m proud of the fact that I’ve stood up against out-of-control spending and taxation in Massachusetts,’’ he said.

Asked whether he is a conservative, moderate, or liberal Republican, he responded, “I’m a Scott Brown Republican.’’

When asked by a reporter, he said he was unfamiliar with the Tea Party movement, a grass-roots conservative effort that has protested possible tax increases and federal spending programs.

Leaving the company’s industrial park headquarters, Brown was greeted by about 50 employees, who twice applauded him. He shook hands with everyone and joked that they “should all go wash their hands now.’’

The race has taken a hostile tone, with Coakley trying to paint Brown as a Republican who would damage women’s rights, take privileges away from seniors, and quash health care overhaul.

Brown’s response has been to criticize Coakley for negativity. Yesterday, as national Democrats tried to paint him as a right-wing Republican who is out of touch, he released new ads featuring his daughters.

“It’s disappointing that Martha Coakley is attempting to deceive voters with her demonstrably false statements on my health care record,’’ Brown said in a statement. “We have sharply different views on the health care bill in Washington.’’

In an interview, Coakley said it was Brown who has been leveling the unfair attacks. “We didn’t start anything negative,’’ she said. “But I’m not going to sit back and not respond. His campaign is the one that has begun, both as he did on the stump and in debates, attacking me.’’

Democrats have become seriously concerned about the prospects of losing the seat long held by Kennedy, who for decades was the face of the Democratic Party. It would be a startling upset - no Republican has won a US Senate election in Massachusetts since 1972 - and would derail the Democrats’ plans for a health care overhaul in Washington.

Some Massachusetts Democrats have called on President Obama to come to Massachusetts and campaign for Coakley this weekend, but neither the campaign nor the White House has announced such a trip. Meanwhile, MoveOn.org, a liberal political action committee; the Democratic Congressional Campaign Committee; and Vicki Kennedy, the late senator’s widow, are raising money for her.

“Everything is on the line,’’ Vicki Kennedy wrote in her appeal, which generated $400,000 in five hours. “The people of Massachusetts will decide who will be their next senator, and we need Martha Coakley.’’

Coakley played down a controversy yesterday over the physically aggressive way a reporter for a conservative magazine was treated in Washington by a Democratic operative following a fund-raiser held Tuesday night. “I think it’s Republican tactics as usual to make much out of nothing,’’ she said.

“I’m not sure what happened,’’ Coakley said, adding: “I do know that the Scott Brown stalkers who have followed me around and the people at that press conference who were for very, I think, right-leaning publications, were incredibly aggressive about trying to get in my face.’’

A video posted on YouTube appears to show the operative - Michael Meehan, a veteran Democratic aide with Massachusetts ties - pushing a reporter for the Weekly Standard to the side as the two walk behind Coakley.

Meehan said he had called the reporter, John McCormack, to apologize.

Martin Finucane of the Globe staff and Globe correspondent John M. Guilfoil contributed to this report. Matt Viser can be reached at maviser@globe.com.