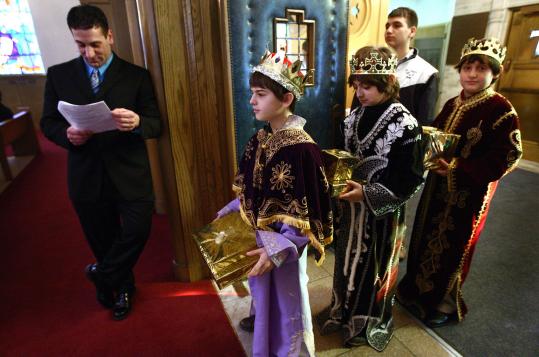 But inside the Holy Trinity Armenian Church of Greater Boston, “We Three Kings of Orient Are’’ was sung out with joy as a regal trio of young kings strode down the aisle bearing gifts for the church pageant’s baby Jesus.

The Armenian church observes Christmas on Jan. 6, the Epiphany, which commemorates the visit of the magi to the newborn Christ child. The Rev. Vasken Kouzouian said many parishioners, often fourth- and fifth-generation Armenian-Americans, also celebrate the holiday on Dec. 25. The church honors the American tradition by observing the “fun side of Christmas’’ with the children’s pageant, which was originally scheduled for Dec. 20. But this year, weather caused it to be rescheduled for yesterday, bringing it closer to Jan. 6.

Kouzouian said the postponement provided an opportunity for the parish to “remind ourselves of the spiritual side’’ of the holiday. “It’s the faith we’re celebrating, not the heritage,’’ he said. Christmas in the Armenian church marks the beginning of Christ’s ministry, he said.

Michelle Sahagian, 12, was one of the narrators of the pageant. Over the years, she said, she has played many roles from a shepherd and a sheep to an angel.

Her mother, Nancy, said she enjoys watching Michelle and her 9-year-old sister, Julia, perform yearly in the pageants. “It’s funny to watch them grow from year to year,’’ she said. “They kind of grow up with it.’’