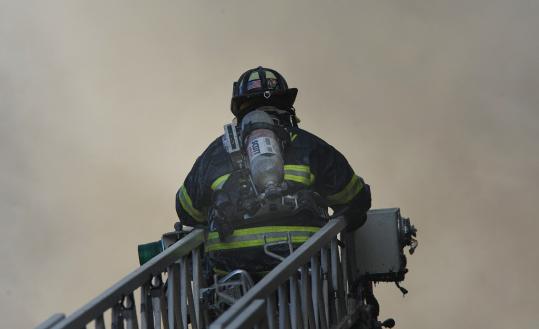 Above, a firefighter climbed a ladder amid smoke from the six-alarm blaze that struck a Malden apartment building. (David L. Ryan/ Globe Staff)
By Eric Moskowitz Globe Staff / January 10, 2010

MALDEN - A fast-burning fire that tore through the upper floors of a Malden apartment building yesterday left dozens homeless on a frigid January morning, rendering half of the 60 apartments permanently uninhabitable and forcing the other half to be vacated temporarily.

No one was seriously injured, though three residents were taken to Massachusetts General Hospital to be treated for smoke inhalation, including one woman pulled from the upper story by firefighters on Malden’s Ladder 3. Three firefighters also sustained minor injuries while battling the six-alarm blaze, which drew about 20 companies from 15 communities, officials said.

“It was extremely difficult firefighting,’’ said Malden Assistant Chief John Colangeli, standing before the badly damaged Mystic Side apartment building yesterday afternoon as firefighters continued to contend with hot spots more than nine hours after the call came in. A charred sink, blackened house plant, and other debris from upper floors littered the soot-covered mulch in front of the building, where shrubs were encased in ice from the fire hoses.

The fire started in a corner apartment on the upper floor of the 4 1/2-story, U-shaped building at roughly 5:30 a.m., Malden and state officials said. The 80-year-old brick building, which sits at 503-509 Pleasant St., has 30 one-bedroom units on each side. On the east side, all 30 were left uninhabitable. On the west side, residents will be displaced until officials declare that half structurally sound, city officials said.

When firefighters arrived, flames were visible at the top floor, and the fire quickly tore through the roof and spread across the top of the building, beyond even a trench cut the firefighters made in an attempt to stop it, Colangeli said.

Working from inside the building, on the roof, and from ladders - and with visual aid from a State Police helicopter - they then cornered the fire at the firewall in the middle of the U, containing it within about three hours, he said.

The state fire marshal’s office and Malden fire and police are investigating the cause, which was not considered suspicious.

The Mystic Side apartments loom over a street mostly occupied by brightly painted Victorian homes and vinyl-sided multifamily houses. In the immediate aftermath, some residents took shelter nearby, as dozens of firefighters battled the fire and scores of onlookers gathered. The billowing smoke and the sound of sirens alerted neighbors for blocks in every direction.

“We don’t know anything,’’ said Malvika Shah, who had lived in the building for two years, a few floors down from where the fire broke out. While other residents clambered aboard buses to seek warmth at a local school, Shah remained, shivering as she watched from the porch of Donna Martorana’s home nearby.

Martorana had allowed Shah’s parents, in their 60s, visiting from Texas, and roused suddenly in frigid temperatures, to rest at her home. Other neighbors also offered help.

“These people, these very, very, very nice people . . . allowed us to stay,’’ Shah said, before turning inside to check on her parents.

Two doors down, Joe Doherty welcomed firefighters, victims, and volunteers. “Some warmth, some tea, bathroom breaks, whatever they need,’’ said Doherty, 39, as the Boston Sparks Association set up coffee, doughnuts, and pizza on folding tables in front of the two-family home where Doherty lives.

Some Mystic Side residents sought shelter with friends and family. More than 50 tenants from 34 apartments went to a “warming center’’ set up by the American Red Cross and Salvation Army, with assistance from the city and state, at Salemwood School, 2 miles away. Malden’s mayor, Richard C. Howard, said they were working to provide transitional lodging for everyone.

Amine Lahlou, a 31-year-old restaurant manager, fled the building and went to the warming center with just his sweat suit and passport. He is alone; the rest of his family is in Morocco.

“I just moved in a month ago. I just furnished it. Brand new, and everything’s gone. [But] I thank God that nothing has happened to me,’’ said Lahlou, who lives one floor below where the fire broke out. “I’m a little stranded by myself over here in the United States, but as long as there is life, there is hope.’’

Governor Deval Patrick visited the school in the afternoon, meeting with each resident individually and addressing them as a group.

Patrick clutched a copy of a drawing from one of the residents, Jack Thrombly, an artist who had lost years of work; the graphic novel-style picture showed him fleeing the building with his wife and cat.