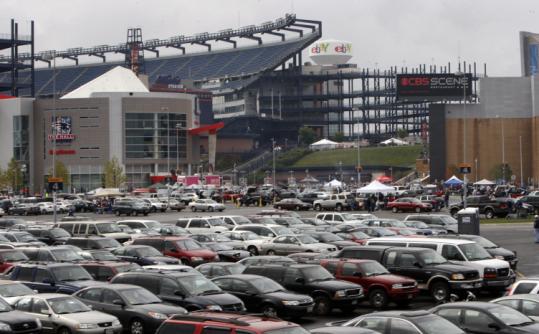 The detention of dozens of immigrants on their way to a temporary job at Gillette Stadium this week has touched off a firestorm in Foxborough, as town officials raised safety concerns for tomorrow’s playoff game between the New England Patriots and the Baltimore Ravens.

Paul Feeney, who chairs the town’s Board of Selectmen, sent a memo yesterday to Town Manager Andrew Gala in which he cited “potential security problems’’ for the game.

He demanded answers about the immigrant workers’ identities, legal status, and criminal records, questioning whether any of those apprehended were on a terror watch list.

“My ultimate concern is that no one knows the true identity of various workers that have been hired to perform work in Gillette Stadium, which by its nature is also at risk of potential coordinated attacks and terrorist activities,’’ he wrote.

A spokesman for Gillette Stadium said the Boston-area vendor responsible for hiring the workers was terminated after the incident. Any vendor hired, said the spokesman, Stacey James,, is required to ensure its employees can legally work at the stadium.

“They are expected to follow the law,’’ said James, who did not name the vendor.

In an interview yesterday afternoon, Feeney said he is awaiting answers from Gala and Police Chief Edward T. O’Leary.

“There are too many questions that I need answered before I can determine whether or not a problem exist for this Sunday,’’ he said.

Foxborough police and Gillette Stadium officials insisted that the games are safe and that every worker and fan is patted down before setting foot in the stadium. Bags are also searched.

James said every worker who enters the facility is under stadium supervision during the time he or she is there. And, he said, “before every event there is a complete sweep of the stadium by State Police and stadium police. ’’

“The safety of our fans is al ways our highest priority,’’ said James.

O’Leary said Foxborough and Gillette Stadium officials have “a consistent program to ensure the safety of [the] fans’’ attending events at the stadium. He would not say what, if any, extra measures his officers will take tomorrow.

“I know that people who are working for the stadium are screened as closely as the fans,’’ said O’Leary.

In a search for fugitives from deportation, agents from the US Immigration and Customs Enforcement agency pulled over dozens of immigrants in Foxborough who were apparently on their way to shovel snow at Gillette.

ICE officials have not confirmed that the workers were working at the stadium, but Guatemala’s consul in Rhode Island told the Globe they were en route there to shovel snow.

The road stop put Gillette Stadium in the spotlight, with questions over the legal status of temporary employees at the complex and about the responsibility of companies that hire subcontractors to verify their workers’ legal status.

The incident was part of a routine operation by federal immigration officials seeking specific fugitives, some with criminal records, who had been ordered deported.

Nine men from Guatemala living in Rhode Island were detained and are facing deportation. Seven of them were held in Bristol County Jail. Five of them allegedly reentered the country after being deported and were referred to the US attorney’s office for criminal prosecution.

Federal officials did not release the names of the detainees.

Forty-nine others, many from Guatemala, were also questioned and released on orders to report to Immigration and Customs Enforcement to determine their legal status.

Steve Kropper, cochairman of Massachusetts Citizens for Immigration Reform, which favors stricter controls on immigration, said Gillette Stadium should hire only subcontractors that can prove that they check employees’ legal eligibility to work, given the high unemployment rate in Massachusetts.

“I demand that contractors verify their employees are citizens, and I’m sure that costs me more,’’ said Kropper, who owns a company. “It’s easy to do.’’

Kropper said, however, that he doubted that the existence of illegal immigrants would create a serious security breach.

Paul Mortenson, a member of the Board of Selectmen, also has questions. “Uniformed officers have to have their credentials checked going into the games,’’ he said, “[and] one would hope that the temporary workers might also be vetted.’’

The stadium found a crew to remove the snow, but it was unclear whether its members were among those questioned and released by federal authorities.

O’Leary, who said his officers assisted Immigration and Customs Enforcement officials in the operation, said safety at Gillette Stadium was never an issue.

“None of the people had any outstanding criminal matters in the Commonwealth,’’ he said. “And based on my observation of over 25 years of managing large stadium events, I don’t perceive the stadium practices as dangerous. They are very prudent in terms of ensuring security.’’

He said the stadium follows a “best practices’’ guide that includes restricting certain vehicle access on event day, patting down fans, and checking packages. The methods have been certified by the US Department of Homeland Security.

Feeney said he is awaiting word from the police chief and the town manager before deciding whether to take action. The five-member board has the authority to revoke event licenses.

Maria Sacchetti of the Globe staff contributed to this report. Meghan Irons can be reached at mirons@globe.com.