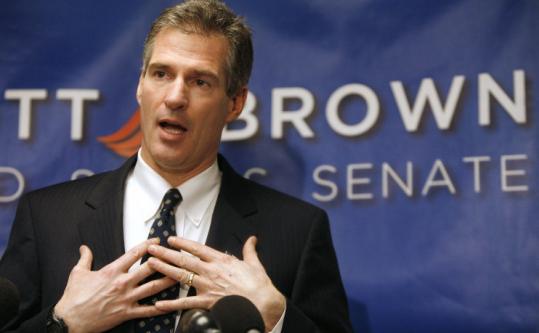 State Senator Scott Brown, the Republican candidate for US Senate, endorsed yesterday the use of enhanced interrogation techniques - including the practice of simulated drowning known as waterboarding - in questioning terror suspects. The point drew a quick rebuke from the campaign of his Democratic rival, Attorney General Martha Coakley, which said she supports President Obama’s ban on waterboarding.

With the Jan. 19 special election two weeks from today, the clash over the rights and treatment of suspected terrorists moved the abbreviated campaign away from the domestic economic issues that have dominated their contest and highlighted a busy day of endorsements and pronouncements from the two major-party candidates in the race for the seat long held by the late Edward M. Kennedy.

After a press conference in Boston in which he called for a freeze on wages for federal employees, Brown, in response to a question, told reporters that Umar Farouk Abdulmutallab, 23, the Nigerian accused of trying to blow up a passenger jet en route to Detroit on Christmas Day, should be treated as an enemy combatant, taken to the US detention camp at Guantanamo Bay, Cuba, interrogated “pursuant to our rules of engagement and laws of war,’’ and not be treated as a civilian criminal suspect. Brown asserted that waterboarding does not constitute torture, but he did not specifically say Abdulmutallab should be subjected to waterboarding.

Torture is illegal under the Geneva Conventions and waterboarding is prohibited under the US Army Field Manual, but during the George W. Bush administration the practice was used by the Central Intelligence Agency in interrogating high-level suspects, including Khalid Sheikh Mohammed, the alleged mastermind of the terrorist attacks of Sept. 11, 2001, on the United States. Brown has objected to the Obama administration’s decision to use US civilian courts to try the purported operations chief of Al Qaeda and four others in connection with the attacks.

Coakley campaign spokeswoman Alex Zaroulis issued a prepared statement late yesterday saying: “We find it interesting that Scott Brown did not speak out against the Bush administration’’ when it “chose to prosecute the ‘shoe bomber,’ Richard Reid, in civilian court here in Massachusetts.’’ Coakley, Zaroulis said, “believes that turned out to be a very effective and appropriate resolution to that case, as he is now serving a term of life in prison.’’

Earlier, Coakley was endorsed by NARAL Pro-Choice America, the latest in a series of abortion rights groups to back her candidacy, and Veterans and Military Families for Progress, a nonpartisan organization that backed Obama’s candidacy in 2008. Brown, meanwhile, picked up the endorsement of retired Red Sox star Curt Schilling, an independent who briefly considered running for the Senate seat, on his weei.com blog, 38pitches.

Joseph L. Kennedy, a Libertarian running as an independent, is the third candidate in the special election.

The Brown and Coakley campaigns sparred on other fronts yesterday.

Coakley’s campaign issued a critique of Brown’s positions under the heading “Scott Brown: The Wrong Choice on Women’s Health Care.’’ The release cited his oppositon to the national health care overhaul bills now pending before Congress, his backing of some restrictions on abortion rights, and his proposed changes to the state’s 2006 health care law that would eliminate the mandate for health plans to cover things such as mammograms, minimum maternity stays, and screenings that can detect cervical cancer at an early stage.

In calling for a freeze on wages of federal government employees, Brown said “it’s not right that lesser-paid private sector workers suffering through a recession have to pay for expensive government salaries.’’

Coakley, he said, “is too beholden to union bosses to pursue the reforms necessary to restrain expanding federal worker compensation,’’ noting the union endorsements she has won.

It features a Brown voiceover while he drives in his GMC Canyon truck with nearly 200,000 miles on the odometer. Brown states that voters around the state are expressing concern about the country’s direction and the growth of government.

“I love this old truck. It’s brought me closer to the people of this state,’’ he says.

The spot ends with Brown driving at night into the two-car garage of his handsome Colonial-style home in Wrentham, decorated with Christmas lights and wreaths, then walking through the front door with the voice of one of his daughters saying “Hey, Dad.’’

His first spot, in which he compares his position on the benefits of tax cuts to that of John F. Kennedy, a Democrat, generated a lot of attention last week and much scorn from Democrats.

Coakley’s campaign has declined to discuss its media strategy, and as of late yesterday, had not aired a general election TV ad.