The kitchen is closed 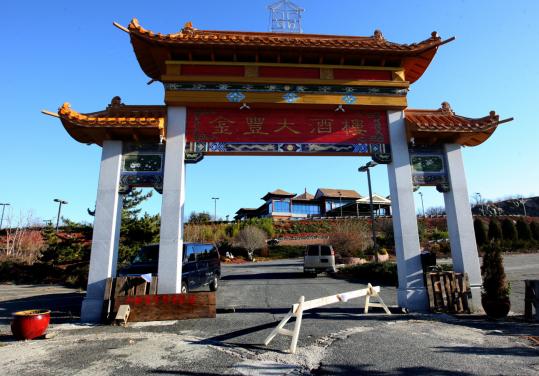 The entrance to the elaborate pagoda-style restaurant atop a hill in Saugus was blocked. Jin Asian Cuisine was closed this month by officials who cited unpaid taxes and liquor law violations. (Joanne Rathe/ Globe Staff)
By Sarah Schweitzer Globe Staff / December 29, 2009

SAUGUS - On a strip known for the conspicuous, the red-pillared palace was going to outdo them all. Modeled on the Forbidden City, home to five centuries of Chinese emperors, the 51,000-square-foot restaurant atop a flattened hill would be more sumptuous than its Polynesian-style competitor, Kowloon, grander than the neon-cactus-fronted Hilltop Steakhouse, more eye-popping than Prince Pizzeria’s “Leaning Tower of Pizza.’’

But for the fourth time in two decades, the dim sum-and-spare ribs fortress on Route 1 is shuttered, its ambitions upended after a series of troubles, including unpaid taxes and liquor law violations, and a shooting at the restaurant that left three men wounded.

Jin Asian Cuisine closed its doors this month, just three years after its New York-based owners relaunched the restaurant with promises of a top-flight operation - a dismal turn, some say, for the restaurant built on the outsize dreams of Chinese immigrants.

“It’s just so sad to see them closed down,’’ said Tirzah Lea London of Brighton, who celebrated her 10th wedding anniversary at Jin on Oct. 29, when undercover police yanked drinks from her guests’ hands because the restaurant’s liquor license had been suspended. “The building is so absolutely stunningly beautiful.’’

But to some in Saugus, Jin needed to go.

“It was hurting the reputation of the town. This is not that kind of community,’’ said town manager Andrew Bisignani. “This was not typical for Saugus, believe me.’’

From its start, the restaurant high above Saugus was a fabled place, born of the success of Rick Chang and his wife, Wilma, who met as high school students in Sao Paulo after emigrating from China around the time of the Communist revolution.

They attended school in the Midwest and arrived in Boston in 1977 to visit Wilma’s family, who owned and operated a Chinese restaurant on Beacon Hill. Rick became the maitre d’ and liked the restaurant business.

When he and Wilma spied an eatery on Route 1 in Saugus for sale, he bought it and named it Weylu, for their infant son.

That restaurant did well - so well that soon Chang owned five other restaurants, in Boston, Salem, Brockton, Woburn, and Newton.

The Changs had a lavish lifestyle, driving a Ferrari Spider with “WEYLU’’ vanity plates, taking ski trips in France, and living in a sprawling Lynnfield ranch home with a pool and tennis courts.

In 1986, Chang launched his most ambitious undertaking, a symbol of all he had achieved. He bought several parcels on a hill above the original eatery in Saugus and built the 1,500-seat restaurant. He fitted it with hand-painted Chinese vases, lotus-shaped silk shades, marble lions, and an indoor waterfall constructed of stone imported piecemeal from China. The cost was $13 million.

“He was so successful with his other restaurants,’’ said George Gregson, a lawyer who represented Chang. “This was his dream to have a place like that.’’

The restaurant opened in 1989 and drew a brisk crowd. But by the late 1990s, business had slowed and Chang struggled with mounting debt. In 1999, the Bank of China foreclosed. Chang was later sentenced to 20 days in jail after he pleaded guilty to charges of unemployment tax fraud.

The Changs moved to Florida and still reside there, according to Gregson. They could not be reached for comment.

Five years later, new owners reopened the restaurant as East Manor, after buying the 8.7-acre property and three-story building for $4.2 million. But East Manor, too, fared poorly, as did its successor, New East Manor. In 2006, the Lam family of New York, which runs Chinese restaurants there, leased the space from Golden Mountain, a New York outfit that had acquired the property, and opened Jin, with a kickoff that featured performances by Dionne Warwick, the Saugus High School marching band, and a Chinese dragon.

It would be a “first class’’ Chinese restaurant, the owners’ representative promised selectmen. Jin would offer a Pan-Asian menu, including a Japanese steakhouse and sushi bar, and would limit entertainment to television, disc jockeys, and wedding bands. But about two years later, when the nightclub Orchid opened in the building, town officials say, rowdy and sometimes violent crowds started showing up.

On New Year’s Eve last year, a brawl brought 30 police officers from Saugus and beyond to the restaurant. Violence recurred sporadically that spring, said Ira Zaleznik, an attorney for the town. Then, on Sept. 12, a drive-by shooting occurred on Route 1. There were no injuries, but a police investigation showed that vehicle occupants had come from Jin, Zaleznik said. On Sept. 19, a shooting in the parking lot ended with three men wounded, prompting an emergency meeting of the Saugus selectmen, who suspended the restaurant’s entertainment license, effectively closing Orchid.

The Lams did not return a phone call seeking comment. Their lawyer, Frank Russell, said his clients had complied with licensing laws and might pursue appeals.

Today, the restaurant, with views of LA Fitness and Lowe’s, sits empty.

A sign on a closed gate at the bottom of the hill says that remodeling is underway. Gregson, who represents Golden Mountain, said a new lessee will take over the space, with plans to open a new restaurant shortly after the new year.