Soldier’s surprise trip home is a Christmas gift for daughter 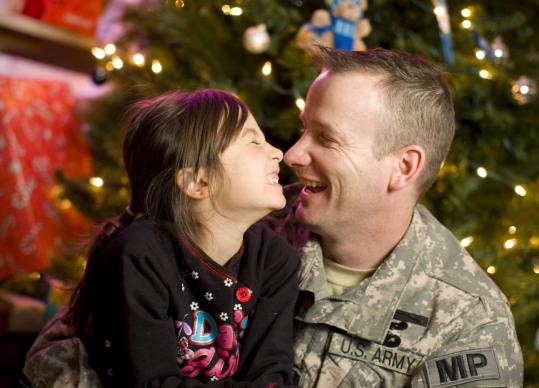 BELLINGHAM - National Guard soldier John Piccinin let his secret slip about a month ago, telling his wife over the phone that he would be able to come home from Iraq for Christmas. And for about a month, Malai Piccinin kept the secret from their 6-year-old daughter.

It was tough not telling Hanna that Daddy would be home for Christmas, the couple said, but they wanted to give their daughter a unique gift, one she would remember for the rest of her life.

“There were times when we wanted to say something, to tell her, but we held out, and it all turned out wonderfully,’’ Malai Piccinin, 33, said yesterday morning. The family stood together outside Hanna’s South Elementary School kindergarten class, moments after Hanna watched her father walk into her classroom on the last day of school before the Christmas break.

Piccinin, a sergeant first class with the 211th Military Police Battalion in Lexington, arrived in Bellingham last night and stayed at a friend’s house overnight to conceal his presence from Hanna.

Piccinin initially wanted to surprise both his wife and Hanna by showing up unannounced before Christmas. “I had been thinking about it for a couple of months, and then when I was talking on the phone with my wife, I just let it out; I had to tell her. But then I told her to not tell Hanna.’’

When Piccinin, dressed in his fatigues, walked into Hanna’s classroom, his presence drew wide-eyed stares from her classmates. Hanna appeared bewildered for a moment, and then flashed a smile, revealing a couple of missing front teeth. She quickly leaped into her father’s outstretched arms.

Moments after the reunion, Piccinin, holding Hanna in his arms, stood outside her classroom and said, “This is great.’’

As they walked down the main hallway of the school, the bubbly girl and her soldier father were the focus of attention. Several television crews followed them, and students looked on in admiration at the tall man in camouflage and boots. A class of nine students, whom Hanna affectionately referred to as “the older kids,’’ stood side by side, waved, and said “thank you’’ to Piccinin.

Hanna let the school’s staff know early on that her father was a soldier. A staff member in the main office said: “Oh, she told all of us on her first day of school. There are no secrets.’’

Piccinin, 38, had been in Iraq since August, and has two weeks at home before returning to duty. His plans are simple, to spend time with his family, which also includes a 1-year-old daughter.

This is not the first time John Piccinin has been in the news.

Three years ago, after being overcome by deadly carbon monoxide fumes inside his home, Piccinin spoke out in favor of a law requiring carbon monoxide detectors in homes with enclosed parking and heating equipment such as boilers and furnaces. The legislation was signed into law in November 2006. Piccinin had collapsed in his bathroom from the odorless fumes.