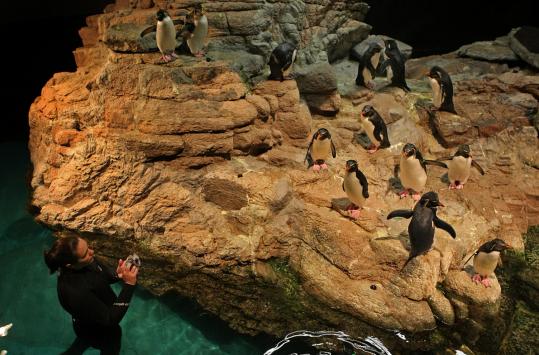 Andrea Desjardins, a biologist at New England Aquarium, was taking photos yesterday as the new birds got to know the old ones. The newly arrived rockhoppers, known for their yellow-feathered foreheads, are found mostly in Argentina and Chile. (David L. Ryan/ Globe Staff)
By Michaela Stanelun Globe Correspondent / December 23, 2009

The New England Aquarium may not have six geese a-laying, as the Christmas carol dictates, but it does have six new penguins a-swimming.

Six female rockhopper penguins were released into the penguin pool yesterday in time for the holiday, arriving from SeaWorld in Orlando.

New England Aquarium spokesman Tony LaCasse said the newcomers, which are native to southern Argentina and Chile, were adapting well to their new home.

“They just went into the exhibit this morning with little disruption,’’ LaCasse said. “Everyone’s figuring things out.’’

Aquarium officials hope the addition of the six females, which range from 1 to 9 years old, will spark romantic interest in the male-dominated tank and bolster the penguin population.

LaCasse said penguins typically find a mate and remain monogamous. They stand 18 to 20 inches high and weigh about 5 pounds. Rockhopper penguins typically have a 30-year life span in aquariums and up to 20 years in the wild, he said.

The new arrivals bring the aquarium’s penguin population to nearly 90 birds, from different species. The rockhopper penguins are known for their yellow-feathered foreheads.