City protests as rink tickets are hawked at high prices 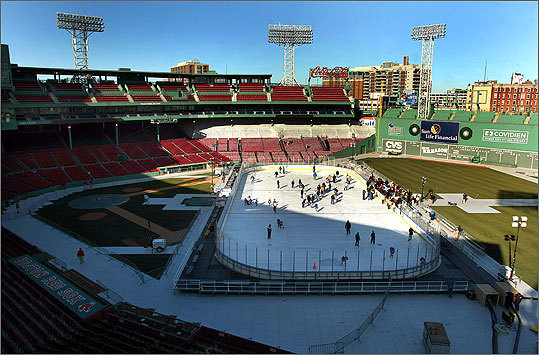 Scalpers used to hawking game tickets at exorbitant prices are now doing the same with tickets that were supposed to be free for city residents to ice skate at Fenway Park, in what could be the first trip for many to the hallowed field.

Tickets for the extraordinary skating opportunity at Fenway, handed out to city families as part of Boston’s New Year’s celebrations, were going for as much as $1,800 for four on websites such as Craigslist and , outraging city officials and event organizers who want to know the identities of the people conniving against others for a buck.

“These are free tickets that were arranged to be given to City of Boston residents to skate free at Fenway Park, they weren’t meant for people to make money off of,’’ Dot Joyce, a spokeswoman for Mayor Thomas M. Menino, said yesterday. “It was really the mayor making sure the residents of this city get something back, especially young people who, given this is Fenway, it might be their only chance to be there.’’

The city organized the skating event for two consecutive Sundays, Jan. 3 and Jan. 10. Event organizers were taking advantage of the ice rink set up at the ballpark as part of the 2010 National Hockey League Winter Classic Game on New Year’s Day between the Boston Bruins and the Philadelphia Flyers. More than 38,000 fans are expected to head to that special event, and tickets to the game were going for as much as $700 on websites.

The scalpers’ postings for tickets to skate at Fenway are clear and blunt. One went: “I have 12 tickets total, will sell all for $4,000. 4 tickets for just $1,800. Once in a lifetime opportunity! No sob stories please prices are firm. Hard tickets in hand. I was given these tix by menino directly and I will be there to ensure your entire party gets into the park. . . . VIP tickets include a meet and greet with Bruin Old Timers and free hot chocolate and donuts.’’

Another scalper who left a phone number offered four tickets for $500 for “under the lights at Fenway Park. . . . Good Luck and happy holidays : ) ’’

The scalper, known only as Tom because he would not identify himself, said he is a Boston resident who properly obtained four tickets, but that he later learned that he cannot bring his family members because they do not live in Boston.

He said he decided to sell the tickets to purchase family presents, but later added, “You’re making me think twice about what I’m doing.

To which Joyce offered, “he should feel bad.’’

Hundreds of residents across the city had tried to get tickets on Saturday, but were turned away because they ran out so quickly. Tim Theriault, 53, of the South End, showed up at the Boston Public Library, only to be told 200 tickets were gone in 15 minutes.

He was disappointed: “Skating in Fenway Park would have been a one-time experience,” he said. But he was more disturbed that someone would take the opportunity to cash in at such exorbitant prices, saying “that’s disgusting.”

“I wish the city could do something, but what can they do,” he said. “That’s just really horrible, really bad.”

Bill Zeoli, a 44-year-old from the South End, waited in line first at the Blackstone School in the South End for close to two hours, then in Chinatown for nearly two hours, and still didn’t get tickets.

But Zeoli, who for years ran a pushcart outside Fenway Park and still goes to Red Sox games regularly, said he recognized some of Fenway’s regular scalpers among the moms and dads waiting in line with their children, and already thought the worst.

“There were absolutely scalpers that I’ve seen for years and years and years,” he said. Zeoli said he doesn’t regret not getting tickets. He went just for the memories of what he called a once-in-a-lifetime opportunity. But he said he feels for the youth hockey players who never got tickets.

“Once again, the profiteers have ruined it for the average working family,” he said. “It’s just a sad commentary for where we are at this time of the year.”

Aside from the hockey game, the city, in partnership with , set up the free skating events. On Saturday, 3,000 tickets were handed out on a first-come, first-serve basis at community centers throughout the city. Residents had to bring proof of their residency, and a maximum of four tickets were distributed for each family. Tickets were for designated times on either Jan. 3 or Jan. 10.

David Jacobson, spokesman for Sun Life, said yesterday that, “we’re extremely disappointed that some people are choosing to resell the tickets and deprive Boston families of this opportunity. We do not condone these actions and want to stress these tickets should not be offered for sale.’’

Joyce said that residents had to register when they obtained tickets, so organizers will conduct spot checks to make sure people have the right tickets. She said city officials also contacted Craigslist, eBay, and other sites yesterday to complain about the scalpers. (The Craigslist postings were gone late last night.)

Joyce called on scalpers to have a heart. “If you don’t want them, give them to a kid, because there are hundreds of kids who would like to go,’’ Joyce said.

Globe correspondent Michaela Stanelun contributed to this report. Milton Valencia can be reached at mvalencia@globe.com.