Spreading holiday joy to all

Homeless children unwrap happiness at Christmas in the City party 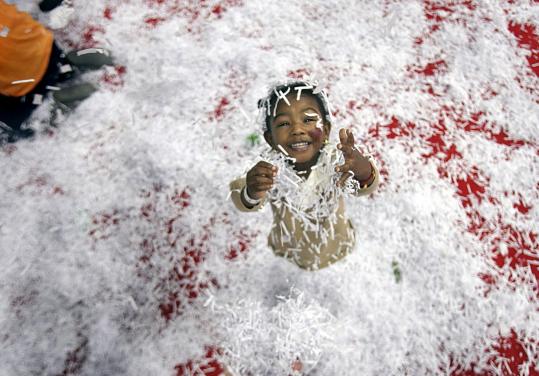 Meshaila Regis, 20 months, reveled in the “snow’’ during the Christmas in the City party yesterday at the Bayside Exposition Center. The annual event, in its 21st year, benefits homeless children and their families. (Suzanne Kreiter/ Globe Staff)
By Meghan E. Irons Globe Staff / December 21, 2009

The dazzling smiles on their faces at a Christmas party in Dorchester yesterday gave no hint of the blizzard outside or the storms in their lives.

“I like the party and the food,’’ said Alex Deandrad, a homeless 8-year-old who was dining with his father, Joao, and his three siblings at the 21st annual Christmas in the City party at the Bayside Exposition Center.

A single father, Joao Deandrad, 28, said he has struggled to make ends meet after the children’s mother, his girlfriend of seven years, left the family earlier this year.

“I’m happy so far here,’’ he said of yesterday’s fête. “They get to smile. And that’s all that matters.’’

Christmas in the City was conceived by Jake and Sparky Kennedy with one theme: Every child deserves Christmas, even if he or she is homeless.

“Every year it’s different,’’ Sparky Kennedy said. “But my Christmas can’t start until the party, and this is it.’’

Children, on 100 buses, were dropped off at the Expo Center, where volunteers in yellow and red T-shirts over their winter jackets lined both sides of a red carpet, cheering guests as they arrived.

Eyes widened, smiles spread, and mouths dropped as children spotted volunteers in costumes such as Tigger, Elmo, and Tinky Winky of the Teletubbies, who served up hugs and high fives in abundance.

Large balloons hung from the ceiling, giant blow-up snowmen stood at the main entrance, and trees filled the cavernous hall with the aroma of pine. A salon offered haircuts; a dentist free teeth cleaning. Volunteers painted faces and made snowmen out of marshmallows. Families noshed on salads, hot dogs, pizza, and hot turkey.

“This is our first year here, the first time we are homeless,’’ said Laurie Jaynes who was with her husband, Timothy Walsh, and their children. “When you don’t have a lot of money, and not a lot to give to your kids, this whole thing is a blessing.’’

Jaynes said her life turned upside down in the past year after she fell ill, lost her job, and could not pay the bills. Soon the house was gone.

“Instantly we were homeless,’’ she said. “People think of homeless people as though they are on drugs or something was wrong with them. I was a nurse. I paid the bills. I took care of my family.’’

After lunch, the guests were serenaded by a choir and a host of bands and performers, and Celtics dancers strutted their stuff.

By about 2 p.m., Santa made his entrance, giving the official countdown for round two: play.

Volunteers at the other end of the Exposition Center tugged the chains to open the giant gates to Winter Wonderland. With roars of glee, the children ducked under the gates and bolted for the play area. They slid down slides, slam dunked on a bubbled court, and learned to lasso in a makeshift rodeo.

Before the gift opening, many youngsters reeled off their wish lists, which varied from new sneakers to video games to a horse.

“I told her no,’’ said Phyllis Robinson, 27, of her 5-year-old daughter Phylicia’s wish for the animal. “She wants to be an equestrian when she grows up.’’

Alexandra Rapson-Balbuena, who also came to the party last year, said it gives her two children, ages 7 and 14 months, the Christmas she could never afford to give them.

Rapson-Balbuena said she has been out of work for two years, getting by on the kindness of friends and family and a small government check.

“I learned to do without,’’ she said. “I find myself making a lot of hard choices and I live on the bare minimum. The best part of this is they don’t realize how hard it is because they are so young.’’