Suspect in rape was out on bail

Kingston man charged with 2d assault on a child 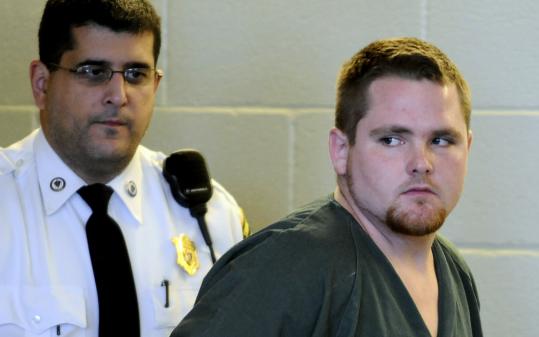 PLYMOUTH - A man arraigned yesterday on charges that he sexually assaulted a 3-year-old girl in Kingston on Friday had been charged this summer with raping another child but was free on bail.

Joseph H. Gardner, 26, of Kingston, pleaded not guilty yesterday in Plymouth District Court to a charge that he raped the daughter of a woman he was dating.

In the earlier alleged rape, the self-described construction worker was freed on $10,000 cash bail - far less than Plymouth prosecutors sought - on Sept. 15. He had been charged with breaking into the Kingston house of a distant relative and raping a 6-year-old girl.

“I always wonder why we let people out who are charged with such crimes,’’ Kingston Police Chief Joseph Rebello said angrily to reporters outside the courtroom. “Obviously, someone who has this type of background is no one that can be rehabilitated, and letting him loose in society only means we are going to have further victims.’’

The mother of the first alleged victim attended the arraignment and also assailed the decision to release Gardner.

“I don’t understand why he is still out,’’ she said, referring to the bail granted after the first arrest. “I think the courts should make sure he goes away and is not allowed to be around kids.’’

Gardner, a burly man with sandy-colored hair and a goatee, wore a green prison jumper at the arraignment and glanced at the mother of the first alleged victim, who sat in the gallery.

His lawyer, Marci McColloch of Plymouth, told Plymouth District Court Judge Toby Mooney that she had “some evidence of a highly exculpatory nature’’ that she hoped to present soon. She declined to elaborate.

Mooney ordered Gardner held without bail pending a dangerousness hearing tomorrow. She also revoked the cash bail his family had posted for the earlier charges and said that officials are taking steps against him for violating the terms of probation from a drunken driving conviction.

Bridget Norton Middleton, a spokeswoman for the Plymouth district attorney’s office, said prosecutors did everything they could to keep Gardner behind bars after the first arrest by asking the district court judge to revoke Gardner’s bail on a pending drunken driving charge, to set $200,000 cash bail on the sex offense, and to impose conditions ordering him to stay away from the alleged victim and her family.

She said the judge was required by law to consider the defendant’s potential danger to the community when prosecutors sought to revoke his bail.

“After reviewing the defendant’s record and hearing the facts of the case, the judge denied our request,’’ she said. Even if prosecutors had requested holding a dangerousness hearing to keep Gardner behind bars, she said, “it would not have changed this judge’s ruling that this defendant’s release did not endanger the public.’’

Depending on the circumstances, Cruz said, judges typically impose a range of bail amounts in sexual assault cases. In some instances, he said, judges have released rape suspects on their own recognizance.

Judges are typically barred from speaking about pending cases.

Jack M. Atwood, a Plymouth lawyer whom McColloch works for and who represented Gardner on the first rape charges, did not return phone calls.

John G. Swomley, a Boston defense lawyer who has represented many individuals accused of sex offenses, said the $10,000 bail struck him as low.

“If the allegations are credible and there doesn’t appear to be something that wouldn’t be suggestive of fabrication, it would normally be a much higher bail,’’ said Swomley, who is not involved in Gardner’s cases.

Still, he said, the judges might have considered that Gardner had never been accused of a sex offense before August, according to public records.

In the first case, Gardner allegedly broke into a Kingston home through a bathroom window, according to the mother of the alleged victim, whose name the Globe is withholding because it would indirectly identify her daughter, the victim of a sexual assault. The Globe does not identify sexual assault victims.

Investigators gathered fingerprints and other forensic evidence that tied Gardner to the crime, she said.

According to a Kingston police report filed in court, the first alleged victim was staying at a woman relative’s house with another female relative, age 10, on Aug. 22. Between 4 and 6 a.m., the woman heard the 6-year-old crying and the 10-year-old girl yelling but dismissed it as a routine disturbance.

But around 6 a.m., the woman got up and was told by the 6-year-old that “a man was in her room . . . and was hurting her,’’ said the police report. A container of baby powder was on the floor and the powder was on the bed.

The woman discovered Gardner - to whom she was related by a former spouse - just steps away from the girls’ bedroom. Gardner said he was there to pick up garbage and take it to the dump, but the woman told police Gardner did not come through the front door and was not supposed to be in her home.

Gardner, who had baby powder on him, was ordered to leave but returned later with his father, David Gardner, according to the police report. Joseph Gardner “was very upset’’ and tearfully denied harming the 6-year-old girl, according to the report.

The woman took the girl to Jordan Hospital in Plymouth and was told by medical staff that the child would have to be taken to Boston to be interviewed by a specially trained medical team, said the report.

But while waiting at the hospital, the girl appeared to recant. A nurse overheard her say “she made it all up’’; outside the hospital, though, the girl told her relative she denied being attacked “because she just wanted to go home,’’ according to the report.

Meanwhile, the 10-year-old gave police a graphic account of the assault, the report said.

The events leading up to the second alleged rape began when Gardner started dating a woman with whom he had gone to high school, prosecutors said. The woman brought her two children, a 3-year-old girl and an 8-year-old boy, to spend the night at Gardner’s home on Friday, prosecutors said.

Gardner lives on Summer Street with his 4-year-old son. The woman had slept there without her children the night before, court records show.

The woman told investigators that she heard her 3-year-old crying in the middle of the night but dismissed it because the girl often got upset while sleeping.

The next morning the woman noticed that her daughter was no longer wearing a pull-up diaper and she asked her about it. The girl then allegedly told her mother that Gardner sexually assaulted her and told the girl he would kill her father if she told anyone, according to police. The woman took her daughter to Jordan Hospital, which notified police.

When police arrested Gardner at home on Sunday morning, he said the woman’s allegations were untrue. “She accused me of this yesterday and wanted money so I gave it to her,’’ Gardner told police, according to court records. “She must have heard about my other case.’’

Andrew Ryan of the Globe staff contributed to this report.