Out on street, Hub tallies its homeless 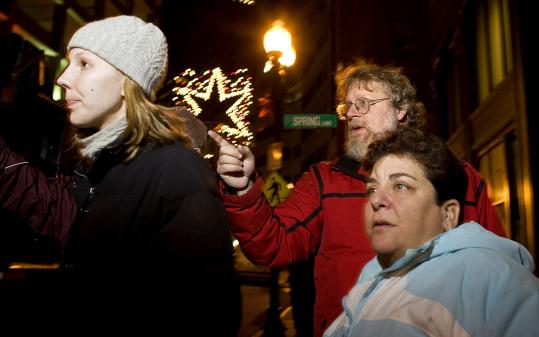 From Downtown Crossing to the Emerald Necklace in Jamaica Plain, some 350 volunteers peered in dark alleys, subway entrances, fast-food restaurants, and ATM lobbies last night to count the homeless population out on the streets for the city’s 30th annual census.

Officials were still tallying the results of the street count and expect to have figures later this week.

The city will compile last night’s statistics, along with numbers from emergency shelters, transitional housing, hospitals, hotels, and motels, for a full homelessness census due out in early January.

Tough economic times, including foreclosures and a state unemployment rate of 8.9 percent, have driven up the number of homeless people living in Boston.

“The problems like the foreclosure [rate] and the downward pressure on the jobs economy has put upward pressure on rents in the Boston area,’’ said Jim Greene, director of the Emergency Shelter Commission.

Though final counts were not available last night, Greene said he expects to see another increase this year in the number of homeless people in Boston.

But he said, “We’re crossing our fingers that we’ll see some signs of hope and progress.’’

Shawn English leaned against a chain-link fence in Downtown Crossing as a group of volunteers approached.

“I didn’t have no place to stay and I ran into these guys,’’ said English, a 29-year-old from Ohio who said he has been homeless in Boston for two years.

English climbed into a white van headed to a local shelter, as volunteers offered him water and sandwiches.

A block away, Matthew Morrissey (“like the boulevard’’) stood outside an entrance to the Downtown Crossing MBTA station.

“He doesn’t want to go to a shelter, but he wants a sandwich,’’ said Beth L’Heureux, co-director of Homeless Services for the Boston Public Health Commission.

Morrissey fiddled with a small piece of paper, passing it between his hands.

“You need a hat or gloves or anything?’’ a volunteer asked as he climbed out of a van. “Need any socks or anything, buddy?’’ another called.

Morrissey took a small bottle of water and a plastic-wrapped turkey sandwich. The 47-year-old said he used to live in Medford and has been homeless for six years since a falling-out with his wife.

He used to sleep at the Pine Street Inn, but now spends most nights near the subway station.

“Is this Mayor Menino’s thing? I heard about that,’’ Morrissey said.

For the first time in his long tenure as mayor, Thomas M. Menino was not among the volunteers for the annual street count. He is recovering from knee surgery at his Hyde Park home.

“It’s going to be weird. People know him by name, by face,’’ Greene said, speaking to the mayor’s ability to coax some homeless people who were unresponsive to other volunteers.

“He’s the mayor for homeless people, too.’’