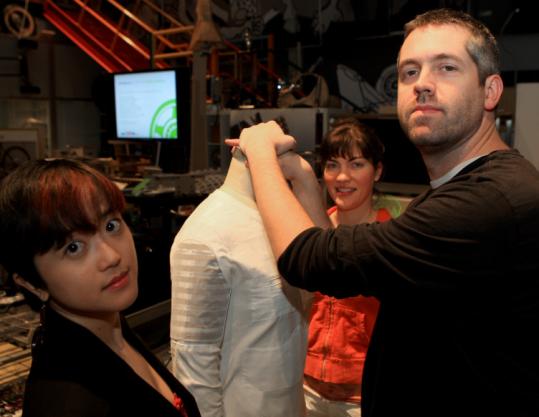 MIT researchers are working on sensor-studded women’s clothing that would record assaults on them and store the data on a computer. The idea is to provide a domestic violence victim with a record that might prompt her to recognize escalating abuse and seek help.

The clothing may never be a practical way to protect victims from abuse, but it is among the research at the Massachusetts Institute of Technology that is geared toward developing ways to keep women safe. And End Violence Against Women,, a yearlong series of talks, film screenings, and other events at MIT, is focused on looking at what is being done and brainstorming better ways of providing protection.

Yoda Patta, a doctoral student in materials engineering who was born and raised in Indonesia, was inspired to launch the End Violence series by her horror at reports of violence against women in other countries.

“I was getting sick of reading in the news about acid attacks,’’ said Patta, 26, referring to reports of women and girls having acid thrown in their faces for violating, or appearing to violate, religious and cultural mores in countries such as Afghanistan and Pakistan.

The columns of Nicholas Kristof in The New York Times were among the reports that moved Patta, and she recruited him and his wife, writer Sheryl WuDunn, to kick off the program with a joint talk in October. Graduate student Adam Whiton, who is working on the sensory clothing with collaborator Yolita Nugent, an apparel designer, said the idea for their project sprang from a discussion on how much more vulnerable she felt walking alone at night than he did.

Clothing, they realized, was a factor. Running from a pursuer in high heels “is near impossible,’’ Whiton said.

They began brainstorming on how clothing could be made not only to leave women unhindered, but to aid them.

Elsewhere at MIT, a team of undergraduates is working on a project to spur better medical treatment for obstetric fistulas, injuries resulting from prolonged labor or rape that often lead to serious medical problems and ostracism.

The condition has virtually disappeared in industrialized countries with modern medicine, according to Star Simpson, one of the MIT undergraduates working on the problem. Her group’s project - which includes an anatomical model to train surgeons in developing nations and an educational packet for patients and their communities - will be entered this year in MIT’s annual IDEAS inventions competition, which presents awards in May.

Patta is considering other events for End Violence, including a March get-together of MIT faculty and students involved in antiviolence initiatives to discuss technological solutions.

She’s also in discussions about scheduling talks by experts on technology and violence and by a representative from the United Nations.

Getting outside speakers to focus on the potential of science to aid victims of abuse has not always been easy, Patta said, citing one advocate for women’s rights in Afghanistan who gave a talk this fall that skirted science to focus on the more familiar political solutions.

“It’s not as natural to approach it from the science and technology aspect. [But] it’s very relevant,’’ Patta said.

Medical technology is a special concern to Patta, who founded Doctors Without Borders@MIT.

Primitive medicine in many countries consigns violence victims to untreated pain and disfigurement, she said, and the dearth of clean water often means women must walk miles to fetch it, leaving them exposed and vulnerable to attacks.

But the main technological boulevard to women’s rights is communications technology, she said.

The proliferation of the Internet in countries with repressive regimes, she hopes, will spread the word about women’s conditions, rally international opinion, and help end the violence.

Information about End Violence Against Women can be found at web.mit.edu/end_violence.

Clarification: A story in yesterday's Metro section said a talk at MIT by New York Times columnist Nick Kristof was set up by Yoda Patta, the founder of a program called End Violence Against Women. The talk was cosponsored by MIT's Center for International Studies. Also, a caption under a photo accompanying the story said Patta and Adam M. Whiton worked with Yolita Nugent. Whiton and Nugent are working on developing sensor-studded clothing that would record assaults on the wearer. Patta launched the End Violence Against Women program.