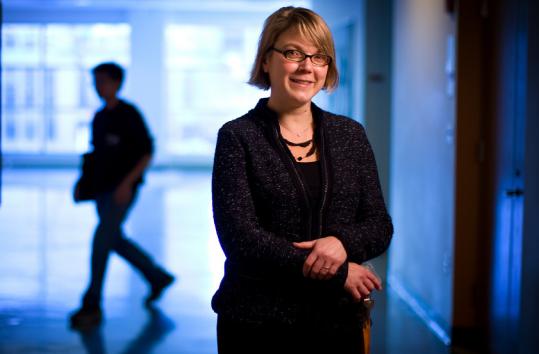 Linda Griffith is a scientific star. The winner of a MacArthur “genius’’ grant and a pioneer in tissue engineering at MIT, she famously helped grow a human ear on the back of a mouse.

All the while, she was dealing with disabling bouts of pain caused by endometriosis, a disease in which tissue normally found in the uterus begins to grow elsewhere, usually in the pelvic area. But it was not something she talked about much, until her 12-year-old niece began suffering the same symptoms Griffith first experienced as a teen - terrible menstrual cramps, excessive bleeding, and pain so intense she would pass out.

Now Griffith has made it her mission to unravel this disease, after realizing that she has the unusual combination of personal experience, scientific expertise, and academic clout to make headway against an ailment that afflicts 5 percent to 10 percent of women, often at a young age.

With about $10 million pieced together from government and private sources, Griffith will lead a new Center for Gynepathology Research at the Massachusetts Institute of Technology, devoted to better understanding and ultimately finding treatments for endometriosis and similar conditions that get relatively little attention from researchers, doctors, and drug companies.

She hopes the center, being announced today at an event attended by “Top Chef’’ television host Padma Lakshmi, another endometriosis sufferer, will also make it more acceptable to openly discuss women’s gynecological problems.

“We need gynepathology to be something my dean can talk about with a straight face the same way he would talk about breast cancer,’’ Griffith said.

The 49-year-old scientist specializes in building three-dimensional scaffolds and layering cells onto them, and finding new ways to coax human tissues to grow in a dish. With colleagues, she once grew cartilage into the shape of a human ear on the back of a mouse, and she’s also built a liver on a chip and helped craft a biological engineering major at MIT. She received the MacArthur award in 2006.

Privately, Griffith struggled with a condition that at one point led her to take 30 Advil a day, hoarding coupons for the medicine so she could stock up. She’s undergone nine operations, including a hysterectomy.

In graduate school, when her qualifying exam was scheduled for the same day her period was to begin, she persuaded the department secretary to make an excuse to the professors to change the date, because she knew she would barely be able to stand up.

Still, Griffith decided she had to do something to investigate the ailment only when her niece started to have the same debilitating pain and failed to get diagnosed promptly. Griffith wrote detailed letters to her niece’s doctor, explaining her disease and its similarities to her niece’s symptoms. But the doctor had the same response Griffith’s own physicians had when she was a teenager: It was just stress.

Then, during a panel at the Museum of Science two years ago, she was asked how her research could specifically help women. She answered that of course it could help: Women had livers, women had bones and the other tissues she was working on in the lab. But she began to think more carefully about the question.

Her surgeon, Dr. Keith Isaacson, director of minimally invasive gynecologic surgery at Newton-Wellesley Hospital, had told her he was interested in collaborating on a tissue engineering project. In an e-mail, she recalled, Isaacson wrote, “When are we going to cure endometriosis together?’’

“Research has been stagnant for the last 20 years. We’ve really done nothing to treat the disease, prevent the disease,’’ Isaacson said in an interview. Sometimes, he said, those diagnosed with endometriosis find that naming their affliction “is not a relief - it adds more stress, because they realize it’s something they have to deal with until menopause.’’

So Griffith began to work with Isaacson, the new center’s scientific co-director, and began recruiting researchers from MIT and Harvard to study different aspects of the disease. She wants self-proclaimed “gizmologists’’ to find ways to work with clinicians, and is urging colleagues of both genders to begin discussing gynepathology as part of the scientific vernacular. The center includes more than a dozen researchers at MIT, Harvard, and elsewhere.

The effort is generating excitement from others in the field. Dr. Tamer Seckin, a surgeon from New York City and cofounder with Lakshmi of the Endometriosis Foundation of America, said that it commonly takes at least a decade for women to be correctly diagnosed. By then, they have typically suffered years of anguish and extensive internal damage.

Lakshmi, his patient, said she wants to increase awareness of endometriosis, among both the public and physicians.

“For me it was difficult to talk about,’’ said Lakshmi, whose symptoms developed when she was a teenager and weren’t diagnosed until she was in her 30s. “It’s a very personal issue, but that’s why I felt, while it was uncomfortable, it was very important for me to speak about it.’’

Little is known about the causes of endometriosis - why cells like those found in the uterus start growing elsewhere. One theory is that during a woman’s period, when endometrial cells wash out of the fallopian tubes and into the abdominal cavity, some might start to grow outside the uterus.

The MIT team will begin looking at samples of fluid from the abdominal cavity of women with endometriosis, using new tools that help them find rare cells and understand their function. Ultimately, they want to build a three-dimensional model of the membrane inside the abdominal cavity that becomes home to the displaced tissue. Other projects range from understanding how cells communicate with one another to examining the possible role of low-dose radiation.

Kevin Osteen, director of the women’s reproductive health research center at Vanderbilt University School of Medicine and a collaborator with the new center, said its approach should be game-changing.

“This brings a . . . new look to a disease that in some ways has sort of suffered from the same old approaches,’’ he said.