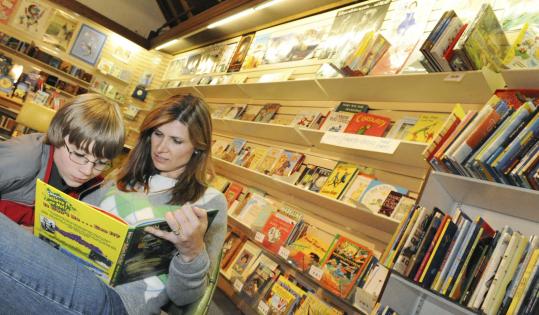 Lori Swain of Andover looks at a book with her son Jonathan, 10, at the Andover Bookstore, which is celebrating its 200th birthday. (Lisa Poole for The Boston Globe)
By Brian Benson Globe Correspondent / December 3, 2009

Phillips Academy instructor Thomas Hodgson often needs access to books quickly when preparing for class or determining what his students should read.

But Hodgson, who lives on the school’s Andover campus, typically forgoes the Internet for the short walk down Main Street to Andover Bookstore, which recently turned 200 years old.

“It’s a farmer’s market of the mind,’’ said Hodgson, who spoke at a party last month celebrating the store’s milestone. “It brings the world of books to a comfortable setting that feels like an extension of my living room.’’

The store - the second oldest in the country after a bookstore in Pennsylvania - features a fireplace, reading nooks, and a popular weekly author series, elements that expand it beyond its traditional bookselling role into a community gathering place, said several longtime customers.

But that atmosphere is under assault as independent bookstores attempt to overcome a weak economy, electronic gadgets that grab people’s attention, and increased competition from chain stores and online retailers.

Membership in the American Booksellers Association is down 10 percent in recent years, while three bookstores in Andover closed in the last decade, leaving Andover Bookstore as the sole survivor.

To succeed, booksellers must reinvent themselves as a local alternative to national chains and websites by providing the same services as well as a cultural atmosphere, said Robert Hugo, a Marblehead resident who owns Andover Bookstore and two other bookstores north of Boston.

“We’re in a modern Gutenberg,’’ said Hugo, referring to Johannes Gutenberg, who invented the printing press in the 1440s, revolutionizing the book-making industry. “We all have to scramble and see how we will survive.’’

Hugo recently began online book sales and is considering buying a machine that would allow his Andover store to print any book in a matter of minutes from digitized versions, he said.

“You want people to be able to shop locally, even at three in the morning,’’ said Hugo, who purchased Andover Bookstore in 1992.

But a successful independent bookstore must also become a community center through author readings, a comfortable atmosphere, and a knowledgeable staff, said Steve Fischer, the executive director of the New England Independent Booksellers Association.

“It’s not enough to unlock your doors at 9 a.m. and expect customers to come,’’ Fischer said. “Bookstores have realized they need to reach out and work with local schools, libraries, and community organizations.’’

That aspect is something that attracted Hugo’s son, John, to the family trade.

“There’s no money to be made in bookstores but you have freedom and independence to set your own schedule and you get to talk to all sorts of people,’’ said the younger Hugo, who manages the Andover store.

Despite the difficulties, the area is home to several successful independent bookstores in communities with well-defined downtown areas such as Salem, Newburyport, and Marblehead, Fischer said.

“Clearly, those are towns that can support a strong, vibrant, independent bookstore against the big-box stores that run up through that whole region on Route 1,’’ he said.

In Stoneham, tThe Book Oasis is a relative newcomer to the market. Founded in 2003, the store, which sells used and new books and opened an online shop last month, weathered a tough economy and a fire last summer.

“We have a strong shop-local feeling here which we try to promote everywhere,’’ said Debbie Sullivan, who owns the store with her husband.

“We’ve really found a good following of people willing to spend a bit more but keep money in town.’’

The Sullivans started the bookstore after they were laid off within three months of each other. Stoneham was an ideal location since it was close to their Woburn home, in a downtown area, and near Interstate 93, Sullivan said.

While the Book Oasis took advantage of a developed downtown, Andover Bookstore’s early owners were in a small farming community whose major commercial enterprises were wagon shops and blacksmiths.

“There was literacy here but you’re talking farmers who didn’t do a large amount of reading,’’ said Don Robb, the president of the Andover Historical Society’s board of directors.

Thankfully for early owners, the store had the academic communities of Phillips and Andover Theological Seminary, Robb said.

In 1813, store owners added a printing press that used the first Greek and Hebrew type fonts in America.

Although the presses stopped in 1960, the store was ready to capitalize on Andover’s changing demographics as suburbanization attracted highly educated workers in high-tech and biotech industries that sprouted along Route 128, Robb said.

One constant has been the store’s status as the official bookstore of Phillips Academy, a designation that provides enough business to carry the store through difficult economic times.

“There’s something about the culture of a small-town bookstore that fits well with Phillips,’’ said Rebecca Sykes, the academy’s associate head of school. “It’s clear to both parties, I think, how much we rely on each other.’’

For local authors, the independent bookstore represents a way to get their name out, said Andover resident and fiction writer Mary McGarry Morris.

“Especially when I was beginning, it was wonderful to know I had that support from my hometown,’’ Morris said.

Although she has achieved national fame, Morris still holds a reading at the store for every new novel, she said.

“I don’t think this is a business that people rush out to start,’’ Morris said. “That’s why we’re so lucky to have this 200-year-old bookstore.’’

A moving tale
The Andover Bookstore through history

1809 - Andover Bookstore was founded on the campus of the Andover Theological Society by Mark Newman. Newman resigned his post as principal of Phillips Andover to sell books to the academy and seminary.

1813 - A printing press was moved into the bookstore.

1963 - The store moved to its current location, a renovated carriage barn at 89R Main St. that was transformed into a retail complex along with several adjacent farm buildings.