She helps Haitians help themselves 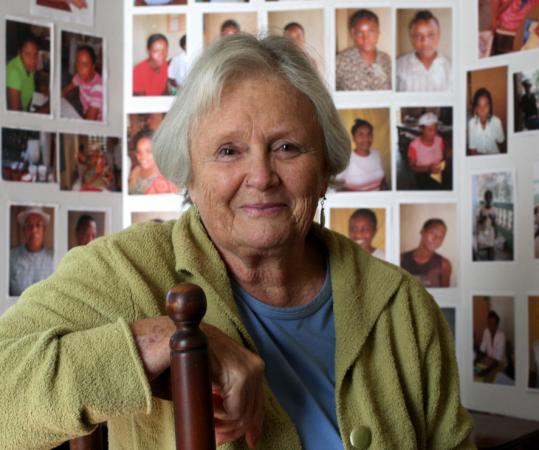 Sarah Hackett lives in the Annisquam section of Gloucester, but returns to Haiti every year for seven or eight months at a time. (John Blanding/Globe Staff)
By James F. Smith Globe Staff / November 28, 2009

GLOUCESTER - At 83, Sarah Hackett could have spent Thanksgiving with her great-grandchildren in the gracious Annisquam village home her family has owned since 1829, overlooking placid Lobster Cove.

Instead, she rose at 3:30 a.m. Thursday to catch a dawn flight from Boston to Haiti, trekking once more to the poor mountain town of Fond des Blancs where she will live for the next several months. Since she retired in 1993 from a nursing career, she has returned every year for seven or eight months at a time, creating projects that help some of the poorest people in the Western Hemisphere stay healthy and make a living.

“It was the women I met there who kept me coming back,’’ she said. “They are so resilient and so courageous and so hard-working.’’

She founded a family planning clinic - butting heads early on with Catholic Church policy that forced birth control out of the local hospital. The family clinic now has mobile branches in surrounding villages, and serves 750 women.

Hackett also spotted an extraordinary untapped talent in the community - the women’s embroidery skills. So she helped the women create an artisans’ sewing cooperative that now exports finely embroidered garments to the United States and Europe, providing a steady income for more than 70 women.

Hackett’s work long ago earned her the gratitude of Fond des Blancs. Now the nonprofit she created, Haiti Projects Inc., has earned international recognition. It was one of three winners last month of the annual Espíritu Award from the Isabel Allende Foundation, along with the Haiti work of Partners in Health, a global health group founded by a better-known Boston activist, Dr. Paul Farmer.

The third winner was the St. Boniface Haiti Foundation, launched by a Catholic church in Quincy, that has worked in Fond des Blancs since 1983. The foundation survived the closure of the Quincy church and, now based in Randolph, runs the hospital and provides education and training programs.

Dr. Wilfrid Cadet, who now runs the growing St. Boniface Hospital, arrived soon after Hackett. In her first days there, he recalled, “She didn’t have a refrigerator. No TV, no radio, nothing, nothing.’’

“I never thought she would last this long in Haiti,’’ he said. “To live in this rural part of Haiti you must have a mental toughness, as well as the strong desire to help others in need, and she has both.’’

Hackett arrived in Haiti after a life marked by personal loss and perseverance. The daughter of a prominent Gloucester dentist, she married and had four children and lived in California. She went back to nursing school and became a registered nurse at 36, but was widowed at 38, and raised her family on her own.

With her children grown, Hackett recalled her teenage ambition to help the poor in Africa. During her nursing studies, she learned that the only place in the Western Hemisphere with African-style malnutrition was Haiti, and “that fixed Haiti in my consciousness.’’

In 1993, her opportunity arose. She was asked by the St. Boniface Haiti Foundation to spend six months as a volunteer in Haiti, in charge of the bare-bones two-room clinic in Fond des Blancs, high in the remote mountains about 75 miles west of the capital, Port au Prince.

She quickly saw that the relentless poverty was causing many of the health problems. “I pondered for a long time and thought, ‘Wouldn’t it be wonderful if they could buy their own medicines,’ ’’ she said.

So she returned to Haiti on her own the following year, determined to build small economic projects. She worked with village leader Briel Leveille in 1994 to bring alive his dream of creating a grass-roots organization that would give tiny loans to peasant farmers to buy scythes and goats. She wrote a proposal for $5,800 in funding, and got that seed money from Boston Episcopal Bishop Thomas Shaw.

The program has been highly successful: Fond des Blancs is now known for its thriving goats - and goat meat. Counting 850 members, the project is self-sustaining and never needed another grant.

Hackett has followed that same model with her other Haiti Projects programs - and hopes to be able to step aside after this trip. She has hired and trained local managers who run the clinic and sewing operations, and she and her board have drafted a three-year plan to raise $400,000 in working capital from American donors to let the nonprofit organization sustain itself under Haitian control.

The embroidered lingerie and home linens have won a growing market, due in part to online sales through the Haiti Projects website (www.haitiprojects.org). Hackett showed off intricate blouses and linen napkins that she stores in a room off her Gloucester kitchen, awaiting shipment. Sales reached $80,000 last year, and the Catholic Diocese of Los Angeles recently placed an order for a new line of “fair trade-fair linen’’ items for church services.

The cooperative lets women work at home, caring for their children while earning $50 to $250 per month, and has a monthly payroll of $5,000. She has also created a library with poetry contests and computers available for public use.

But her highest-impact project may be the family health clinic. After St. Boniface closed its family planning unit in 1994 because of the church’s opposition to birth control, she found a room to rent and raised $10,000 from St. Anthony’s Alliance in New Mexico to launch an independent clinic in 1995. From the initial 47 women attending the family clinic, there are now 750 active clients. Two years ago, the clinic opened mobile branches - with staffers traveling by motorbike to nearby villages every Saturday.

Hackett said that she had been treated as a pariah when she launched the clinic, and only in the last few years have her relations with the religious personnel in the hospital improved. The St. Boniface Foundation and her Haiti Projects Inc. operate separately but cordially.

Cadet said Hackett has succeeded in Haiti because “she is very lively and very approachable.

“She didn’t come here as the white American woman saying ‘I know everything, I will get you out of poverty.’ She took time to listen to people, and not to judge them.’’

James F. Smith writes about Boston’s global ties. His blog is at boston.com/worldlyboston and he can be reached at jsmith@globe.com.

UPDATE: Sarah Hackett returned to Haiti on Thanksgiving morning for the 17th straight year since her retirement. In December she received a letter from an admirer, saying he had read an article about her in the Boston Globe, "and I want you to know I deeply appreciate the work you do for Haiti." The writer said she had set an example for her country, not least by continuing to give after her retirement, and concluded: "My best wishes for a productive and memorable experience." The letter was from former President Bill Clinton, who also is special United Nations envoy to Haiti. Hackett was in her village when the earthquake struck in January. She was unhurt, and helped victims who flooded into the village from the capital. She was evacuated two weeks later. She has hired new managers for her non-profit, and says "we have been doing very well, but it is time to ratchet it up." She will return to Haiti in September. - July 15, 2010