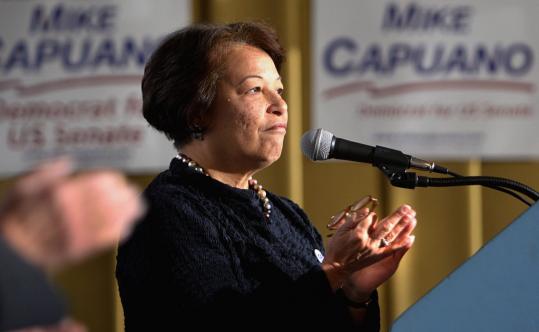 DEDHAM - Diane Patrick, the governor’s wife, issued an impassioned plea yesterday to elect US Representative Michael E. Capuano to the US Senate, but the congressman hedged when asked whether her support might help him against Attorney General Martha Coakley, the perceived front-runner and sole woman candidate.

“It’s more personal than anything else to me,’’ Capuano said of the endorsement. “I’ve said from day one, I’m not concerned about gender issues.’’

Although Governor Deval Patrick remains officially neutral in the four-way Democratic primary race, his wife called Capuano a “tenacious fighter’’ who would make a difference on the Senate floor.

“Mike is, number one, a brilliant strategist, and I don’t mean that in the sense of campaigning, but in the sense of getting the job done,’’ Patrick said at a campaign stop before about 150 people at the Dedham Community Theater. “What you see in Mike Capuano is what you get. He is the most genuine man I know.’’

Capuano said he is “proud’’ to receive Patrick’s backing, which follows the congressman’s early support for her husband’s gubernatorial campaign. But when asked to rate its importance, Capuano replied, “I have no idea.’’

The six-term congressman, appearing at his 50th “Open Mike’’ forum across the state, never mentioned Coakley by name in the question-and-answer session. However, he clearly assailed her opposition to the House health-reform package because of its ban on federal subsidies for insurance plans that cover abortion.

Although Capuano supports abortion rights, he said he voted for the overall House package only to keep the legislative process moving. However, Capuano has said he will oppose any final bill that preserves the prohibition following House-Senate negotiations.

Coakley said last week she could support the Senate’s recently unveiled health proposal, whose language on abortion funding is less restrictive than the House version.

Capuano also reiterated his support for a public-option insurance plan as a way to bring competition to the marketplace and curb the skyrocketing increase in health costs. Coakley’s campaign did not return a request for comment before press time last night.

On another topic, the congressman took a no-name swipe at Pagliuca, a co-owner of the Boston Celtics and business success who is pledging to create jobs.

“I’m for jobs,’’ Capuano said to laughter from the audience. “Who isn’t for jobs?’’ Pagliuca’s campaign declined to comment.

Alan Khazei said in a statement yesterday that Diane Patrick had just one vote.

“I saw Michael today at a forum in Lincoln, which the other candidates chose not to attend. And, I congratulated him on receiving Diane’s support,’’ he said. “I believe the citizens of Massachusetts will ultimately vote not based on endorsements, but on who will be the best senator for Massachusetts..’’

In an interview, Patrick said her decision to back Capuano developed over the last several weeks. Her husband’s neutrality in the race, Patrick said, was not an issue for her.

“We are very different individuals who have the pleasure of being together,’’ Patrick said. “He’s very supportive of what my decision is.’’

Coakley has received the backing of Massachusetts Senate President Therese Murray and more than 20 female lawmakers on Beacon Hill. She also has been supported by EMILY’s List, a national political organization that promotes abortion rights.

The attorney general embarked yesterday on a two-day campaign swing through Western Massachusetts.