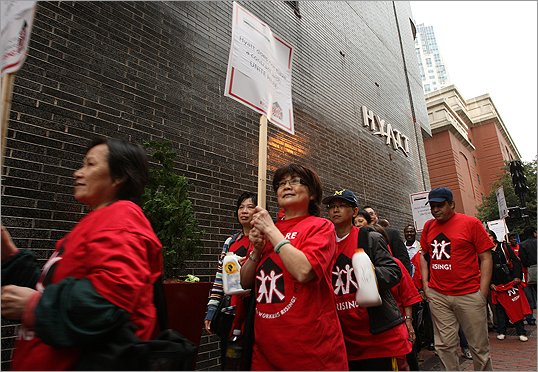 (Essdras M Suarez/Globe Staff) Hotel workers and their supporters rallied in front of the Hyatt Regency Boston in September for the 100 housekeepers who were fired by the hotel chain.
By Kevin Cullen Globe Columnist / November 16, 2009

Hyatt Hotels had a magnificent debut with its initial public offering on the New York Stock Exchange a couple of weeks ago. The Pritzker family that controls the hotel chain raked in a cool $950 million on the IPO, so maybe they can use some of the money to pay the hospital bill for Viola Joseph’s 5-year-old son.

The way Hyatt handled the firings was a PR disaster, so Hyatt rowed back a bit and offered the fired housekeepers jobs elsewhere and promised to keep their health care coverage through next March while they decide whether to accept one of those jobs.

The housekeepers are supposed to have until Dec. 31 to decide.

This all sounds fine on paper, but paper often means nothing when you’re standing in a medical billing office, as Viola Joseph was last month at Children’s Hospital.

Viola Joseph’s son has sickle cell anemia, and they go to Children’s so often that she could close her eyes and find the place.

They had been waiting months for a checkup, and she was taken aback when the people at Children’s told her she had to pay $700 for the visit.

“I told them I had insurance, but they said the insurance was only for me, not my children,’’ she said. “And I said, ‘No, no, I’ve worked for Hyatt for 10 years and I have always had a family plan.’ And they said, ‘Not anymore you don’t.’ ’’

You can’t argue with a computer. Viola Joseph had to fork over $100 in cash on the day of the visit and Children’s said it would bill her the remaining $600, which is about $600 more than she has in her purse.

Viola Joseph started asking around and found out that another housekeeper, Amie Jobe, brought her daughter to a doctor because she had the flu, and the same thing happened: The family plan that had covered Amie Jobe’s kids now covered just her.

The day after the Hyatt IPO made some millionaires even bigger millionaires, the fired housekeepers met in Chinatown and realized that the phenomenon of family health plans suddenly becoming individual health plans was spreading faster than swine flu.

Many of the housekeepers who gathered in Chinatown don’t think this is a computer glitch, or an oversight, or anything other than payback.

Hyatt denies this, as it denied tricking the fired housekeepers into training their replacements.

Governor Deval Patrick got a phone call on a late Friday afternoon and showed up at the Chinatown meeting. He promised to go to bat for the housekeepers, as he had when they first got fired.

Patrick fired off a rocket to Hyatt. This prompted Bruce McDonald, general manager of the Hyatt Harborside, to send yet another letter to the fired housekeepers last week, insisting there was no change in health care coverage.

“As we have said before,’’ McDonald wrote, “if you were covered under Hyatt’s medical plan as of August 31, 2009, you will automatically continue to receive the same coverage (single, single plus one, or family coverage) at no cost to you until March 31, 2010.’’

Tell that to Viola Joseph. She’s already out a hundred bucks and doesn’t know what to do when the bill arrives from Children’s.