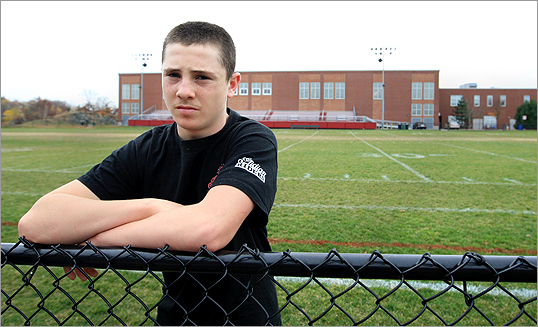 At his North End apartment, in a ritual repeated time and again over the past five years, Trovato took out a frayed, hand-written list of children of fallen service members from Massachusetts and penned the names of Van De Giesen’s children, 18-month-old Avery Grace and Colin Joseph, then unborn.

He’s been writing the names of such children since 2004, when, at 23, he read about a soldier who died in Iraq without meeting his newborn son. Troubled by the loss and by the hardships it would inflict on the child, he decided to set up a fund to help pay for the boy’s college education.

When the next parent died in the war, he made the same pledge. Five years later, his Massachusetts Soldiers Legacy Fund has an endowment of some $3 million and has promised up to $40,000 in college grants to each of the 62 children who have lost parents in the wars in Iraq and Afghanistan.

His list has become an expanding litany of the cost of war in the Middle East. While heartened by the outpouring of public support, Trovato said, he is staggered by the scope of the casualties.

“I never could have imagined we’d still be adding names five years after we started,’’ he said, his voice welling with emotion. “But they’ve given us so much, we have to do whatever we can to honor their commitment and their sacrifice.’’

The fund awards up to $10,000 a year for each child’s tuition, and hopes to provide more.

Trovato, a 28-year-old who played minor league hockey before quitting to work at a Boston venture capital firm and devote more time to the legacy fund, said he is heartened by the strong public support for his cause.

Looking back, he said, ending his hockey career was a worthy sacrifice. “This is going to last a lot longer than my legs would have,’’ he said.

The fund, which is paying grants to three children, supports students whose parents listed Massachusetts as their home of record and were killed on deployment. The average age of eligible children is 8.

There is no selection process - children automatically qualify for grants - and Trovato contacts families directly to let them know about the fund.

He usually waits several months after a service member’s death before contacting the family, particularly if the children are young. Despite the interval, and repeated experience, the first calls never get easier.

Over the years, Trovato has grown close to some of the families. He attends graduations and memorial services, and some parents e-mail him pictures of their children, to show how they are growing up. He can name all the children on the list, their ages, and where they live, and believes they are owed an enormous debt.

“I think they should be on our dime for the rest of their lives,’’ he said. “These families answered the call of duty, and when they don’t come back, they deserve our help.’’

The grants also pay tribute, Trovato believes, to the slain soldiers’ memory, a lasting gift to their kin. “You don’t want that sacrifice to ever be forgotten,’’ he said.

To raise money, he initially approached wealthy individuals with military connections, but has broadened his fund-raising to solicit foundations and businesses. A number of veterans and business and political leaders advise and contribute to the fund.

Students can use the funds to attend any college. Tuition payments are made by the fund directly to the school.

Colleen Piper, the widow of Christopher N. Piper, a Green Beret who died in June 2005 after sustaining critical injuries in Afghanistan, said the fund provides more than badly needed financial help for families who have lost their primary wage-earner. It also provides a sense of support and community.

Her daughter, Deirdre, 18, began college this year, and her son, Christopher, is a sophomore at Marblehead High School, where he plays football on a field renamed for his father. The children miss their father, she said, but are doing well and are proud of his service.

“For the family of a fallen soldier, it’s just so meaningful,’’ she said. “You feel good that out of darkness, there’s light that comes, too.’’