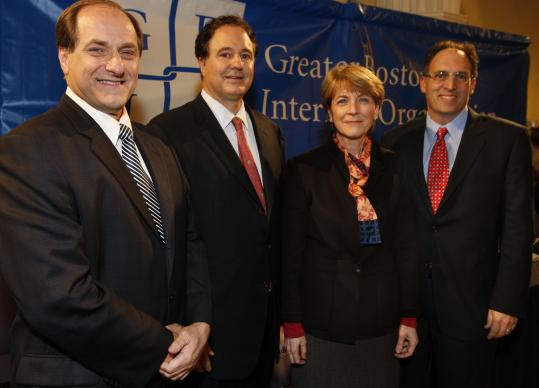 The four Democrats running for the US Senate met last night with almost 800 members from Boston area congregations, who demanded they commit to a platform of actions, including capping interest rates and restoring health care benefits recently taken from legal immigrants.

The candidates agreed to most of what was asked. But City Year cofounder Alan Khazei and businessman Stephen G. Pagliuca distinguished themselves by declining to commit to a 10 percent cap on interest rates that they said was not realistic.

On a night when the congregations were in charge and no stump speeches were allowed, leaders of the Greater Boston Interfaith Organization called the candidates to the Bethel AME Church in Jamaica Plain to focus on a short list of concerns, identified as most important by their members. They pressed them to answer “yes’’ or “no’’ to whether they will implement proposed solutions.

“Tonight we are one organization with one agenda . . . and that spells power,’’ the Rev. Hurmon Hamilton, GBIO president, told the cheering crowd assembled under an arched ceiling in the airy sanctuary.

The candidates for the seat held by the late Senator Edward M. Kennedy were given six minutes apiece to explain their positions.

Organizers with the interfaith group spent a year talking with families from their 55 member congregations - which include Baptists, Catholics, Muslims, Lutherans, and Jews from Somerville, Roxbury, and Newton - to whittle the list of issues to a handful. After hearing stories of soaring interest rates and crushing personal debt, they researched possible legislative remedies and drafted a four-point platform to present to candidates.

First, they asked the next senator to work for a national cap of 10 percent on the interest rates lenders can charge. They then asked that private student lenders be limited to the same interest rates permitted for federal student loans, and that the restriction preventing the relief of student debt through bankruptcy be lifted.

Third, members asked the candidates to promise to provide $100 million per year for job training and support in Massachusetts. Finally, they asked for assurances that national health care reform will not erode access in the state, and for federal funding to restore state health care benefits recently stripped from 31,000 legal immigrants.

The candidates were quick to embrace most of the proposals. US Representative Michael E. Capuano praised the platform as a “home run,’’ called $100 million for job training “an absolute minimum,’’ and said he hopes to eliminate private student loans.

“The American dream has been turned upside down . . . and it is time to answer yes, yes, yes, yes to all these questions,’’ she said.

Khazei and Pagliuca lauded the project and endorsed most of its principles but said they don’t believe the 10 percent cap can be accomplished.

Although the interfaith organization, headquartered in Dorchester, has long been active in state and local politics, the session with the Senate candidates was the first time it has sought to influence national policy, said Rabbi Stephanie Kolin, who helped plan the event.

“It seems like the moment is right and the atmosphere in the country is right,’’ she said. “The power the banking industry is wielding has become so detrimental to families, we can’t not act to protect them, and make sure we have a voice.’’

Each candidate agreed, if elected, to meet with representatives of the interfaith group during his or her first three months in office to provide an update on their progress.

The key question asked of them - would they fight for the congregations’ concerns - was posed by members living with the burdens they described.

They included Daiquan Bradford of Roxbury, whose mother, a receptionist, was laid off, and who was unable to find a job himself last summer, and Ray Geldart, who graduated with honors from college but gave up her dream of joining the Peace Corps because her private student loan debt could not be deferred.

The vocal, enthusiastic crowd seemed to draw energy from its control of the proceedings.

“It’s our people, it’s our plan, it’s our power,’’ the crowd chanted boisterously at the start of the event, led by Hamilton.

The candidates kept within their time limits.

“It’s important we know how to listen, as well as talk to you,’’ Coakley said.

Alliea Groupp, a participant from Old South Church in Boston, said the issues raised by the congregations had received little attention.

“These are big shoes to fill, and I think people are trying to find out who really represents them,’’ she said. “The problems we’re hearing about can’t be fought and won in the state alone.’’