Membership down, the Athenaeum is (gasp) marketing itself to a younger set 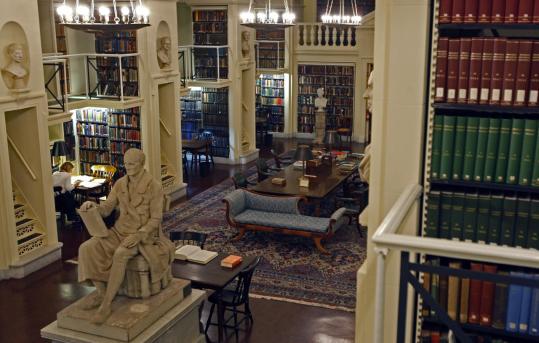 The fifth-floor reading room at the Boston Athenaeum offers ideal conditions to curl up with a book. (Photos By Jim Davis/Globe Staff)
By Sarah Schweitzer Globe Staff / November 15, 2009

Guarded by scarlet leather-bound doors and bordered inside with gilt-lettered books and marble busts, the for decades was the province of the city’s elite families. The Cabots and the Adamses and the Coolidges all claimed membership in the private library on Beacon Hill, handing down their membership “shares’’ through the generations.

To belong to the Athenaeum - to have license to troll through the personal library of George Washington and a rare collection of Confederate documents and memorabilia - was to belong to Boston’s highest society, or at least have access to it. Entree was coveted, sought after, and not always granted.

“Any barriers that surround it have been high enough to keep out nuisances,’’ the Athenaeum’s library director from 1946 to 1973, Walter Muir Whitehill, once said.

Yet in an age when elite institutions are no longer built on last names, and in the face of new technology and a battering recession, the Athenaeum has found itself confronting new realities. With its membership of several thousand slipping and an endowment that plummeted by a quarter since 2007, trustees have been forced to embrace what once would have been unthinkably gauche, or simply un-Athenaeum-like: an out-and-out membership drive.

The library has begun advertising in Boston Magazine and the Improper Bostonian. It has hired a marketing director, and traded the demure name-only sign on the front of its building for one with a come-hither photograph of the luminous fifth-floor reading room. It has reduced the number of references required for new members from four to two, opened up select lectures to the public, and created a fan page for itself on Facebook (after the concept was explained to trustees by a young member). As part of its pitch, the library is making known that it has wireless Internet access and recently purchased five Kindles that can be uploaded with some of the its collection.

“We’ve had to rethink the things that we said we would never do,’’ said Deborah Hill Bornheimer, an Athenaeum trustee.

In a market-driven society, the changes may seem like no-brainers. But for the Athenaeum, they are a delicate matter. Presenting the library as an accessible and transparent institution must be balanced against its allure as a tradition-bound Boston redoubt.

Trustees have drawn some lines. The identities of proprietors, the 1,049 members who own voting shares of the library, remain private, as they have since 1907, known only to each other and Athenaeum staff. The Athenaeum may now be rented out for corporate events, but not for weddings, lest a champagne glass be smashed on Jean-Antoine Houdon’s bust of Lafayette. Cocktail hours are permitted, but only after scheduled lectures, such as an upcoming lecture on Louis Armstrong, not as free-standing events.

“We’re not going to be a bar on Friday nights,’’ said Janice Thompson, director of institutional advancement.

The Athenaeum (usually pronounced Athen-EE-um, but sometimes as Athen-AY-um.) was founded in 1807 by a group of men who belonged to the Anthology Society, literary types who envisioned creating a Boston version of the Athenaeum and Lyceum in Liverpool. The library was to be a galvanizing cultural force in a young city. The Athenaeum grew to be one of the largest libraries in the nation. Loyal members considered it an extension of their living rooms, bringing their dogs (still permitted) and enjoying daily tea (still practiced, though now only every other week.)

Today the library’s collection contains more than 500,000 volumes, with a focus on Boston and New England history, literature, and fine and decorative arts. Remarkably, two-thirds of Washington’s personal collection is here. There is a wide array of newspapers and artwork, too, with paintings by Gilbert Stuart and John Singer Sargent and sculptures by Augustus Saint-Gaudens and Houdon.

The library had several quarters before moving to its current home in 1849 at 10 1/2 Beacon St., a neo-Palladian building overlooking the Old Granary Burying Grounds. In 2002, the building emerged from a three-year, $30 million renovation that added a children’s library, space for book storage and conservation, new wiring, and climate control.

To enter the building is to feel an overwhelming impulse to read. The gentle quiet, the busts of greats - Petrarch and Dante, and Franklin - the weighty but not overstuffed shelves of carefully culled selections - Dan Brown, yes; Danielle Steele, no, per the curator of manuscripts - beseech that titles be taken down and opened on a broad walnut table or carried to leather chairs in alcoves. To talk in the library feels like a violation, the breaking of a covenant between the founders and the books. Indeed, in the fifth-floor reading room, with its vaulted ceiling and arched windows, overly aggressive rustling of papers can draw sharp looks from users, who have been known to lay claim to reading spots for a lifetime.

The library is rescued from stuffiness by glints of off-kilter humor: In the anteroom to the fifth-floor terrace, a 1976 portrait shows a man seated in a hotel room, holding in his hand, library officials swear, a joint.

Such irreverence would not have been permitted earlier; books deemed too racy once were kept in the locked “scruple’’ room, accessible only with a key provided by the head librarian, according to “The Proper Bostonians’’ by Cleveland Amory.

From the start, the library has sold annual memberships in addition to proprietorships, and allowed scholars to access the collection. But a sense that the library belonged to the proprietors long persisted. When shares of Athenaeum stock went up for public auction during the Depression, the Boston Herald observed that “hoi polloi’’ had finally gained admittance to the Athenaeum and that “cash customers’’ could now “rub shoulders with Lowells and Cabots.’’

The perception of exclusivity was not always dispelled by library staff. Whitehill, in explaining why he had chosen to end the practice of serving tea, was quoted by the Christian Science Monitor in 1976 as saying, “suburban visitors and unsophisticated journalists’’ came and “marveled at the intriguing notion of tea as some Appalachian mountaineers might at the unfamiliar thought of wearing shoes, or having plumbing indoors.’’

The realization that a more welcoming message was needed came a few years ago as membership was falling - from 5,112 in 2004 to 4,336 in 2008 - and trustees wondered if computers would one day make books irrelevant.

“Goodness me, what will become of us?’’ Marshall Moriarty, a trustee, recalled thinking.

Eventually, Moriarty said, the trustees came to a consoling conclusion.

“We could be the same kind of place we have always been for people who want to read and write and talk and think,’’ he said.

The Athenaeum’s updating and marketing efforts have begun to show results. The number of young members paying the $115 annual membership fee (the cost is $230 for those over 41) increased to 683 this year, after reaching a low of 530 in 2008. Among the new recruits is Sam Zegas, a 22-year-old recent college graduate who attended tea last week, savoring sultana scones and cornichon tartines on Wedgwood china.

“Growing up in Boston, I assumed it was one of those old elitist institutions,’’ said Zegas, who plans to plumb the library’s collection of early Boston maps. “But it’s very cool, and the kinds of things they have here are relevant to young people.’’

Steven Bowe, a 22-year-old who works in finance and who recently recruited Zegas, said that young members have of late sensed an urgency from the trustees and greater receptiveness to their ideas; it was his idea to make a Facebook fanpage, so that members could get online alerts about upcoming events.

“I remember hearing, ‘It’s never been done here.’ And this place hadn’t done things that hadn’t been done,’’ he said. “But the library needs to take these chances - recruiting people not from Harvard or from moneyed old Boston families. It needs to be putting itself out there.’’