Cahill says he rebuffed request to be Baker’s No. 2 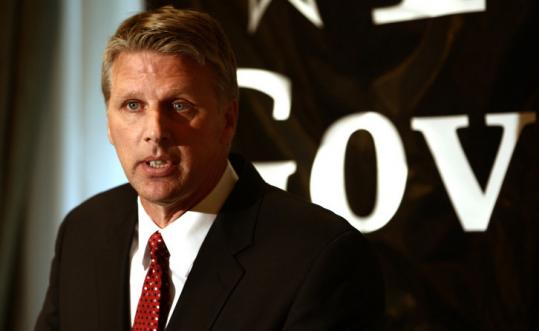 "I feel like I have every bit as much right to run for the top job as he does." -- Timothy P. Cahill, State treasurer (Pat Greenhouse/ Globe Staff)
By Andrea Estes Globe Staff / November 11, 2009

State Treasurer Timothy P. Cahill, who is mounting an independent candidacy for governor, said yesterday that he had rejected entreaties from supporters of Republican rival Charles D. Baker to quit the race and serve as Baker’s running mate.

Cahill said he turned down the proposal, made Friday in a phone call from Joseph Nolan, an executive active in Baker’s campaign, to Cahill’s chief of staff. That call, Cahill said, came a few weeks after another Baker supporter, former Weld administration official Mark Robinson, made a more general inquiry to another Cahill aide.

The pairing of the two self-described fiscal conservatives could have posed a strong challenge to Governor Deval Patrick, whose reelection hopes, according to early polls, could rest on a three-way race.

Cahill said that while he was not exactly insulted that Baker, who has never run for statewide office, would ask him to be his lieutenant governor, he was taken aback.

“I feel like I have every bit as much right to run for the top job as he does,’’ Cahill said in an interview. “And I would hope people would respect that.’’

A spokesman for Baker said that no one from the campaign had made a formal offer to Cahill.

“We intend to select a running mate, but it’s an internal process among the candidates, campaign staff, and consultants,’’ said the spokesman, Rob Gray. “Those are the only people who speak for the campaign, on this or any other issue.’’

Robinson said the topic came up in an off-handed way at a purely social lunch with a Cahill aide, and he said he had not discussed the matter with Baker beforehand.

“It’s pretty clear they want me out of the race and preferably on Charlie’s team,’’ he said.

Cahill’s decision not to team up with Baker is decidedly welcome news for Patrick, who stands to benefit politically if the race includes two challengers who split the anti-incumbent vote. The campaigns of Baker and Cahill acknowledge that a three-person race next fall helps Patrick, because Baker and Cahill are likely to divide the moderate and conservative vote. Convenience store magnate Christy Mihos is also running for the Republican nomination.

A recent Suffolk University poll showed that Patrick, if the election were held today, would beat both Cahill and Baker. But together their support was greater than Patrick’s.

Patrick campaign spokesman Steve Crawford dismissed the prospect of a Baker-Cahill team, saying: “Deval Patrick is running on a proven ticket with [Lieutenant Governor] Tim Murray and on their record working under difficult circumstances to get Massachusetts back on track. What other people choose to do is up to them.’’

Cahill and Baker each believe that he has the best shot at beating Patrick. Cahill argued yesterday that Baker’s chances are greatly diminished by his presence in the race.

“The biggest impediment to his winning is me,’’ Cahill said. “It’s going to be extraordinarily difficult for a Republican to win with a fiscally conservative former Democrat running as an independent who polls very well and has always been supported by independents, conservative Democrats, and even some Republicans.’’

If Baker thinks he has the edge, Cahill said, he is wrong.

“I’ve run successfully statewide twice before,’’ the treasurer said. “I got the most votes of any statewide officeholder in 2006. I have $3 million in the bank and have had strong fund-raising. I’ve been in elective office for 22 years and elected in 11 elections. I know what I’m doing. I have a good feel for this business.’’

He added, “I think the timing is right for me.’’

A Baker campaign adviser countered that elections around the country have shown that an independent candidate for governor cannot win.

“Cahill will be lucky to hit 10 or 15 percent; he just doesn’t know it yet,’’ said the adviser, who asked for anonymity to discuss the campaign. “The election in New Jersey just showed that third-party candidates can’t win and are bound to come in third, especially if you have a lack of fund-raising, which Cahill’s first two months running for governor have demonstrated.’’

Even with millions in the bank, the Baker adviser said, Cahill cannot raise enough between now and the election to run a winning campaign.

“With no personal wealth and no party committees available, he can’t win,’’ the adviser said. “Anyone who has run a campaign for governor before will tell you that. It’s not enough resources.’’

While Baker might want Cahill as his running mate, Cahill said, he had no intention of returning the offer.

“He said he’s running for governor, and I take him at his word,’’ Cahill said. “He’s not running so he can set himself up to be lieutenant governor any more than I am.’’