Are forced to cancel events for lack of battlefields 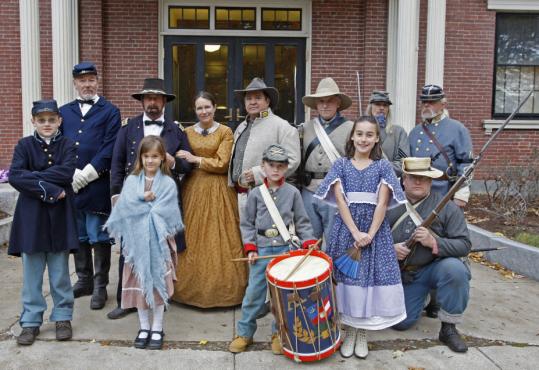 GROTON - They’re all dressed up with no place to fight.

The gradual disappearance of open land in Eastern Massachusetts is turning into a crisis for a 500-member group of Union Civil War reenactors known as the New England Brigade. They were forced to cancel an annual Columbus Day spectacle last month that had attracted 2,500 participants and spectators in years past - all because nobody would loan or lease them a battlefield big enough to stage the event.

“We are losing property right and left,’’ said Matt Burbank, the commanding officer of the brigade. “I would say 2009 was one of the worst reenacting seasons we’ve had in years because we have been losing too much property.’’

Finding just the right reenactment spot is a true rarity, Burbank said. It was always a challenge to find a swath of land that would provide adequate shade for horses, sufficient space between Confederate and Union camps, varied terrain for cannon shooting, and time within the farmer’s haymaking and harvest schedules. These days, financial pressures on farmers - and state parklands - and fear of lawsuits have dried up the supply even more, he said.

Which is what happened in Groton last month when two local farms refused to host the mock battle and encampment - complete with cannons and cavalry - organized by a group of local Civil War buffs, including Sam Grant of Townsend, a professional General Ulysses S. Grant reenactor, who impersonates his hero down to the ever-present cigar. “It was disappointing, ’’ he said.

Now the group - which includes both Confederates and Union reenactors - are in search of 50 acres of well-drained land and a parking lot, as Yankee law requires for a full-blown reenactment.

It is turning out to be a surprisingly difficult task in a place as history-obsessed as Eastern Massachusetts - even if the region’s tastes for history have long favored the Revolutionary War over the Civil War.

Groton - a rural town 35 miles northwest of Boston - has now joined the communities of Millis, Sharon, Sutton, and Fort Warren Park in Boston as places where reenactment groups have lost venues - or faced fees or restrictions that made their events impossible, said Burbank, an Uxbridge-based farrier.

Randi Richert of Dudley was planning to attend Groton as a Union soldier from Oxford, a role he has played at national reenactments at the battles of Gettysburg and Antietam, where the original Bay State company suffered the loss of three-quarters of its men.

After leaving the Army after serving in the Middle East during Operation Desert Storm, Richert became interested in reenacting, and has turned it into a family hobby for his children, 11-year-old Virginia and 9-year-old Leland, “who think it’s really cool,’’ he said. “They are learning about history in a way a classroom could never touch. And we have a great time,’’ he said.

The issue of disappearing land will probably come up at the New England Brigade’s annual meeting in January, said treasurer Norbert Rieke. The brigade holds several reenactments every year. “I do think we can make the case to the public that this is educational and important and in the interest of all the citizens of the Commonwealth,’’ Rieke said.

State Representative Robert Hargraves, a Groton Republican, tried to help the local reenactors after their five-year-old arrangement to use Hillbrook Orchard fell apart over the summer, when the owners of the farm in Groton backed away for personal reasons.

Hargraves, who attended the group’s events there in 2005 and 2007, said he was mesmerized. “You wouldn’t believe the sight of the horse soldiers coming down [the hill] in blue and the cavalry meeting them in gray. It conveyed such a sense of panoramic of the battle, like what I’d imagine Gettysburg’’ looked like, he said.

Civil War reenactment belongs in Groton, which lost at least 40 men in the War Between the States, and should be hosted locally out of respect for the long-forgotten names covering the Civil War memorial at Town Hall, said Hargraves. The representative even appealed to the state Department of Fish and Wildlife in hopes the group could use a portion of Groton’s Surrenden Farm conservation land instead, but the permit request was rejected over issues related to drainage, parking, and the start of hunting season, he said.

In terms of local military pride, the Civil War has always run a distant second to the American Revolution, although Massachusetts was one of the first to respond to Abraham Lincoln’s calls for abolition with the war’s first African-American regiment, and more than 100,000 local boys and men left home to fight.

Unlike the Southern United States, where national parks, cemeteries, and even small towns frequently host Civil War mock battles, parties, lectures, and wreath-layings, most large-scale Massachusetts military reenactments - and tourism efforts - are Revolutionary War oriented. Those reenactment groups have not had problems similar to those of the Civil War reenactors, in part because their activities requires less space.

Every September, Longfellow’s Wayside Inn in Sudbury, established in 1716, hosts an annual Colonial Faire and Muster, where dozens of local militia, along with fife and drum corps, come from all over New England to perform and camp overnight on the inn’s east field.

But the conflict that some Southerners still call the War of Northern Aggression began in South Carolina, and only one battle was fought north of the Mason-Dixon line.

“The mindset on other parts of the country is so different. History is the Civil War. You knew about the American Revolution, but it didn’t happen in your town,’’ said Richard Dobbins, founder of the Duxbury-based American Civil War Research Database, the largest online searchable American Civil War database.

Julie Marin, a Groton Civil War event organizer, said she was frustrated that state officials had not made more public land in Eastern Massachusetts available for large-scale living-history activities. Her group, she said, has liability insurance and has worked well with local police, fire, and town officials to enjoy smooth reenactments in the past.

Marin doesn’t blame anti-Civil War bias for her group’s trouble in Groton. She chalks up the difficulties to skyrocketing land prices and the housing boom of the past decade, along with people “still learning what we’re about and what we have to offer people,’’ said Marin, who often portrays General Grant’s wife, Julia, wearing homemade skirts with stiff petticoats.

He concurred that many New Englanders are desperately in need of a crash course in Civil War history, to balance out local fervor for that “other war.’’

“You can see that when you go to some events [in costume] and people ask where the Redcoats are,’’ he said wryly.