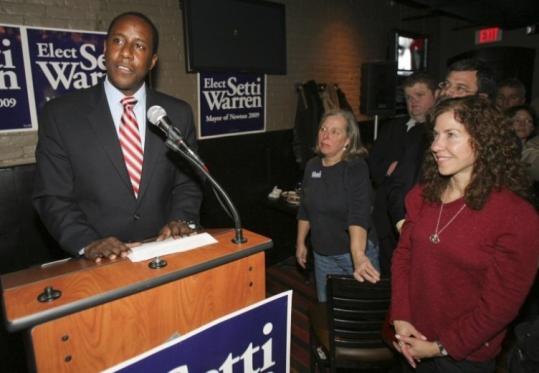 Setti Warren’s victory in the Newton mayor’s race is the latest in a small but growing trend, Iraq war veterans who have sought elected office.

Warren, an intelligence officer in the Navy Reserve and the city’s first African-American mayor, rarely spoke about his 11 months in Iraq during the campaign until Tuesday night, when he addressed the terrors of war and contrasted that experience with what he sees in Newton.

Many veterans of the Iraq war have turned to politics in recent years, especially during the 2008 election, when one of the contenders for the nation’s highest office, Senator John McCain, burnished his reputation as a hero of the Vietnam War. But although McCain was standard-bearer for the Republican Party, Warren was elected mayor of an affluent suburb of 83,000 that is known for the liberal politics and the antiwar stance of many of its residents.

Peace activists began holding weekly public vigils in Newton Centre after the US-led invasion of Afghanistan and the ensuing Iraq War. And shortly after the terrorist attacks of Sept. 11, 2001, two residents sued the Newton school district, accusing administrators of failing to properly display American flags and allow daily time for the Pledge of Allegiance. The case was dismissed in Middlesex Superior Court.

In candidate debates, Warren frequently pointed to his experience in government, rather than to his military service.

He most recently worked as deputy state director for US Senator John F. Kerry and also worked 10 months as director of the New England region of the Federal Emergency Management Agency.

Yesterday, in an interview in his campaign headquarters less than 24 hours after he defeated state Representative Ruth Balser, Warren recalled having to leave his pregnant wife behind when he traveled to Iraq.

“It tests your mental capacity, your mental toughness,’’ Warren said, wearing jeans, sneakers, and a leather jacket with patches from his Navy service sewn on. “It reminds you how fortunate I am to have been born and raised in Newton, to be able to come back home to a beautiful daughter, a beautiful wife, a beautiful family.’’

Warren said he does not see Newton residents as antiveteran.

“I haven’t seen that at all,’’ Warren said. “People have been very supportive. They appreciate my service very much.’’

“Service to the military is an enormously good training ground for leadership,’’ Kerry, a Vietnam veteran, said yesterday. “People who serve have a terrific grounding in management.’’

One of the best known veterans of Iraq who succeeded in politics is US Representative Patrick J. Murphy of Pennsylvania, a Democrat and the first veteran of that war elected to Congress. Murphy, a military lawyer, volunteered to deploy after the Sept. 11, 2001, terrorist attacks and served in Baghdad from 2003 to 2004. He returned home and was elected to Congress in 2006 and reelected last year.

And last year, another veteran of Iraq - John Boccieri, a Democrat - was elected to Congress from Ohio’s 16th District. Boccieri had already spent eight years in the Ohio Legislature, where he was an advocate for veterans.

But many veterans are newcomers to politics, with little or no political experience.

In Maine last year, Alex Cornell du Houx, a young veteran of Iraq from Brunswick, had better luck. He was elected to the Legislature, two years after being deployed to Iraq, where he patrolled the streets in and around Fallujah as a US Marine.

Lisa Kocian of the Globe staff contributed to this report.