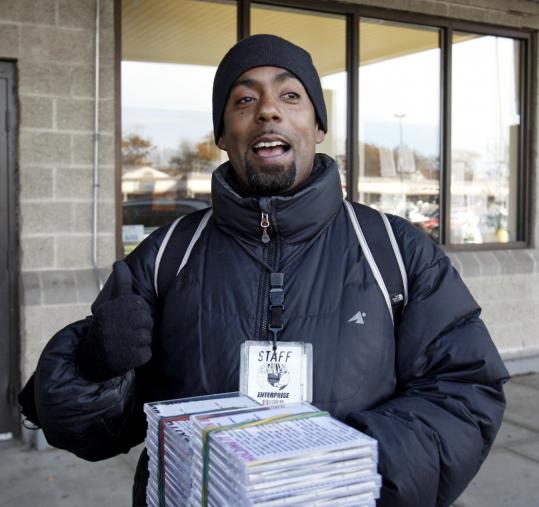 "You can say, 'Hey, I know the mayor,' and a lot of people actually do know the mayor." -- Manuel Cabrera, on the new mayor of Lawrence. (Winslow Townson for The Boston Globe)
By Peter Schworm and Katheleen Conti Globe Staff / November 5, 2009

LAWRENCE - In his campaign for mayor of this city dominated by immigrants, William Lantigua refused to debate or attend many forums. He shunned the local newspaper.

It didn’t matter. The Dominican-born Democrat had canvassed the poor side of town, chatting up residents in his native Spanish and listening intently to their concerns. The result: a watershed moment Tuesday, the first Latino elected mayor in Massachusetts.

“It’s about demographics,’’ said Giovanna Negretti, director of the Latino group ¿Oíste?. But it’s also, she said, about a city that “needs someone who understands their issues.’’

Lantigua’s win headlined a groundbreaking election that propelled a host of female and minority candidates to political office across the state. Women will lead 14 cities, the highest figure to date and nearly one-third of the state’s total.

In Boston, Ayanna S. Pressley became the first African-American woman elected as an at-large city councilor, and Felix G. Arroyo became the second Latino to serve on the council, after his father.

“If we can start seeing women taking on these executive-level positions in government, we might see them move into state government in a larger way,’’ said Carol Hardy-Fanta, who directs the Center for Women in Politics & Public Policy at the University of Massachusetts at Boston. “I really see these women as part of a new wave, which has never happened in this state before.’’

Five years ago, there were just five female mayors in Massachusetts. But on Tuesday eight were elected, including Linda Balzotti, who became Brockton’s first female mayor.

A lifelong resident of the blue-collar city, Balzotti expressed hope that her victory would lend hope to every local girl who has been told “she can’t do something.’’

In the same vein, Boston teenagers have been inspired by Pressley, a 35-year-old who grew up in a rough part of Chicago but went on to work as Kerry’s political director.

“You can see the excitement in their eyes,’’ said Cynthia Loesch, president of the Codman Square Neighborhood Council. “To see someone who looks like them and is so smart and articulate, that means a lot to a young kid. Suddenly, they have a stake in the process.’’

“He showed what could be done, what was possible,’’ said Sarah-Ann Shaw, a Roxbury community leader. “Their election was something that was long overdue.’’

In Lawrence, the victory for Lantigua, a state representative, was heralded as a moment of hope. And for minority candidates in Lawrence and beyond, it was seen as a breakthrough, a day they had worked toward for years, but still feared might never come.

The fastest growing ethnic group, Latinos are gaining political clout in other Massachusetts cities, notably Springfield, which on Tuesday elected several representatives of Hispanic descent, Negretti said. But perhaps predictably, Latinos’ first mayoral victory occurred where their ranks are the deepest. As of Tuesday’s election, 57 percent of Lawrence’s registered voters were Latino, the first time the ethnic group had attained majority status in a Massachusetts city.

“Obama could have come to Lawrence to run against him and he would have lost,’’ said Frank Incropera, the president of a neighborhood association who supported Lantigua’s opponent, City Councilor David C. Abdoo. Incropera criticized Lantigua’s campaign, saying it downplayed the concerns of white middle-class voters.

Lawrence has fielded strong Latino candidates in the past, but the Latino community didn’t throw its full support behind them. This year, voters seemed more united in their support, rallying around a candidate who was well established in politics and around a belief that it was time to finally elect one of their own.

“I think no one should be surprised that Latinos wanted to see a Latino mayor,’’ said Marguerite Kane, a former Lawrence city councilor and professor of political science at Merrimack College. Kane, along with other academics and political observers, said that voting along racial lines has a long history in the United States and that it typically takes generations for minority groups to accumulate political power.

“It’s a natural progression,’’ said Agnes Bain, a political science professor at Suffolk University who lives in Lawrence. “We have seen inroads on the City Council and School Committee, and it was just a matter of time before it reached the mayor’s office.’’

Bain credited Lantigua’s grass-roots network and retail-style politics for his success in mobilizing Latino voters, who have typically had a poor turnout.

Many Latino voters said that, more than racial solidarity, Lantigua’s familiar presence and the personal connections he made with residents propelled him to victory.

“We kind of just know Willy. He’s around,’’ said Manuel Cabrera. “You can say, ‘Hey, I know the mayor,’ and a lot of people actually do know the mayor and they feel that way, which helps. It’s Willy, you know? That’s how people feel.’’

While Lantigua’s refusal to participate in debates or answer media questions about his past alienated some voters, many dismissed the criticism. “Lantigua is a guy who’s been around Lawrence for a very long time, and people know who he is,’’ said Pedro Almanzar, who came to Lawrence from the Dominican Republic. “He won because he did the legwork. He went door to door throughout the whole city. He touched people’s hands.’’

Newly elected city councilor Daniel Rivera said voters were galvanized not by ethnic pride, but by frustration with city government. “Anglo households, Latino households, people were just sick of things not getting done,’’ the 38-year-old said. “Communities that have the problems we have, they just want a government they can rely on. It might be a different language, but it’s the same message.’’