Made up of Harbor Islands, no one cast ballot since 2004 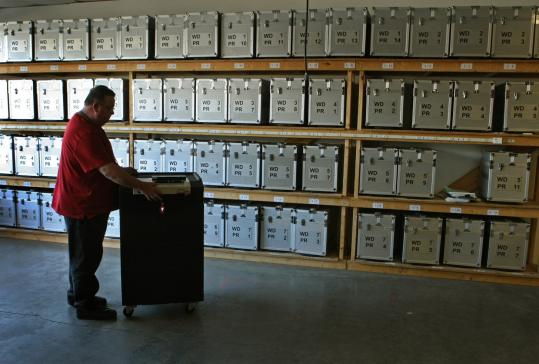 It’s one of the stranger rituals of Boston politics: For each Election Day, a pristine ballot box is cleaned, filled with fresh ink, and force-fed at least 50 test ballots before being lugged to a seaside precinct where nobody will vote.

“It’s the lonely machine,’’ said Loretta Paulding, the election warden in charge of Ward 1, Precinct 15, for the last 15 years. “But I do have to keep an eye on it. And at the end of the night, I still have to tally up zero, zero, zero.’’

This phantom precinct, made up of Boston’s Harbor Islands, where no ballots have been cast in the last four elections, is a quirk of the city’s intricate electoral landscape, which because of an obscure legal exemption has not been redrawn in almost a century. The archaic system will be on display again today, when Boston voters go to the polls to elect a mayor and City Council.

Critics argue that the antiquated structure should be reorganized and streamlined to reduce the number of precincts, an overhaul that would require fewer poll workers and police officers and save taxpayers an estimated extra $100,000 per election, according to MassVOTE, a nonpartisan voting rights group. The current, lopsided structure leaves the busiest ballot boxes with more than 2,300 voters during some elections, while other precincts have far fewer.

“This one little voting place is so out of whack that it is an indication that all the precincts in Boston are in need of adjustment,’’ said Avi Green, executive director of MassVOTE. “They all need to catch up with the last 100 years of demographics and history in our city.’’

Historically, the islands were lumped in with precincts for cities and towns on the mainland, even when the harbor teemed with hospitals and military forts. In Hull, for example, the three active voters still living on Peddocks Island belong to a larger precinct and take a boat to vote at Memorial School.

But in Boston, the Harbor Islands became a standalone precinct sometime in the 1990s. To save money and avoid hiring additional workers, the physical polling place remained on the mainland in Columbia Point, where another Dorchester precinct also votes. During municipal elections, the precinct includes nearby Thompson Island and Long Island, which is closer to Quincy and has homeless shelters with 214 registered voters, almost none of whom come to the polls.

During state and federal elections, however, the precinct includes only Thompson, an island of salt marshes and meadows less than a mile from shore that is home to a defunct school and an Outward Bound Education Center. Only 24 Thompson Island residents have registered to vote in the last 15 years, casting 31 ballots in 15 general elections.

The last active registered voter is Raul Lorenzana, 35, an Outward Bound instructor from Brooklyn, N.Y., who last cast a ballot in 2004 and has since moved, said Arthur N. Pearson, president of the Outward Bound Center.

“I don’t think anybody considers it their permanent residence any more,’’ Pearson said.

State law requires every other city and town to redraw its electoral map once a decade, using the federal census to ensure that voters are equally apportioned. But the Legislature granted Boston an exemption in 1920, according to City Council President Michael P. Ross. Ross is among several councilors pushing to redraw the city’s precinct map, which would require permission from the Legislature.

“I think the best reason for doing this is electoral equality,’’ Ross said. “The resources of democracy should be distributed equally. They are not.’’

Longtime voters, however, can be creatures of habit who identify with their polling places the same way they do a ZIP code or a telephone exchange.

“People grow accustomed to voting in the same place all the time,’’ said Lawrence S. Dicara, a former Boston City Council president. “Any change is difficult.’’

Another complication is Boston’s abundance of college students, which creates “accordion precincts’’ that swell with voters every four years for presidential contests, but have anemic turnout in other elections. That makes it hard to draw a precinct near a university the same size as another in a more stable residential neighborhood.

The combination of the regular municipal election and the special Senate election triggered by the death of Senator Edward M. Kennedy means that Boston will have four election days in five months, highlighting the system’s inefficiencies.

Andrew Ryan can be reached at aryan@globe.com.

Correction: Because of an editing error, a headline for this story misstated when the last ballot was cast. It was in 2004.