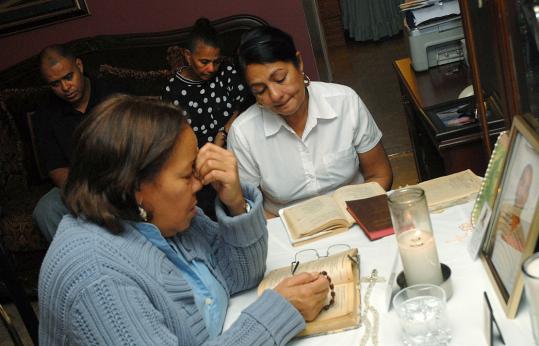 The last time Milady Tavarez spoke with her brother, Pedro, he sounded lonely but otherwise fine. For a year and a half, he had been bounced from jail to jail, fighting deportation to the Dominican Republic. Now, he sat in the Suffolk County House of Correction, eager for her to visit.

As his stunned family gathered on Oct. 19 around his bed at Brigham and Women’s Hospital for their final goodbyes, hard questions about his medical care swirled around them. How long had he been sick? Why was he taken to three hospitals? What had caused the rapid decline of an otherwise healthy 49-year-old man?

The death of Tavarez, a Providence shuttle driver, occurred just weeks after the Obama administration pledged to improve conditions and medical care in the immigrant detention system, which is spread out across the country in federal, local, and privately run jails. The goal is to hold immigrants to ensure their deportation, but the system has faced criticism for its cost, lack of oversight, and inadequate access to care.

“We’re calling for an investigation,’’ said Dominico Cabral, the Dominican Republic consul in Boston. “As the consulate, we feel this case could have been handled better.’’

Advocates for immigrants say the system is still prone to neglect.

“I don’t think that it’s gotten any better yet,’’ said Laura Rótolo, a staff attorney with the ACLU of Massachusetts who has researched conditions in Massachusetts jails. “There’s a little more transparency now, but we have not gotten any indication that the medical attention is a lot better, or even adequate.’’

US Immigration and Customs Enforcement, which is in charge of detaining and deporting immigrants, said the agency is committed to providing medical care to all detainees. The agency has referred Tavarez’s death to its Office of Professional Responsibility and the state medical examiner for an investigation.

“The agency takes every allegation of misconduct or treatment involving an individual in the agency’s custody incredibly seriously,’’ said Marc J. Moore, assistant director for field operations for detention and removal for ICE, as the agency is known, in Washington. “We want to do a full and comprehensive review.’’

Peter Van Delft, spokesman for the Suffolk County jail, declined to comment on the case because of the federal investigation. The Suffolk jail was reviewed during the summer and received a good rating, ICE spokeswoman Nina Pruneda said. The jail typically houses 270 immigrant detainees and receives $90 a day in federal funding for each of them.

In a statement issued last night, Van Delft noted that Suffolk detainees have access to an on-site clinic that is staffed by a physician 60 hours a week, as well as other medical staff, and that inmates who require more help are taken to area hospitals. The in-house facilities also include a mental health clinic, dental X-ray equipment, and access to an optometrist and nutritionist, Van Delft said.

New federal rules require the government to announce detainee deaths far more openly than before, evidenced by the Tavarez case; his death was announced to the news media, Congress, and watchdog groups within 24 hours of his passing.

In contrast, Rótolo said, she did not learn about the controversy surrounding the 2006 death of another Suffolk detainee, 59-year-old Vincent Murphy, until this year because key documents had been kept confidential.

Rótolo obtained documents through the ACLU’s National Prison Project that she said raised questions about Murphy’s death, including an autopsy report with a broad cause of death. She also obtained an American Bar Association report that revealed the existence of a letter from detainees claiming the jail neglected Murphy, though he was “coughing blood.’’

A similar controversy is unfolding after Tavarez’s death. Relatives, as well as the Dominican consul, are calling for an investigation. Detainees wrote a letter to one of Tavarez’s sisters saying the jail was slow to respond to his illness.

He was sick for three days before they attended to him, according to a copy of the detainees’ letter.

Immigration and Customs Enforcement said in an initial statement that Tavarez was taken from the Suffolk County House of Correction to Brigham and Women’s on Friday, Oct. 16, with “possible pneumonia.’’ He was treated for heart and respiratory conditions before he died. The statement did not mention other hospitals.

However, the consul differs from federal officials on the date. Cabral said he was told that Tavarez was taken from his bed, feverish and trembling, two days before immigration said he was taken to the hospital.

Tavarez’s relatives said they were baffled by the decision to ferry him from one hospital to the next and said it raises concerns about his care.

“We don’t understand it,’’ said Jennifer Lopez, Tavarez’s niece, who lives in the Bronx, N.Y. “If he was so sick, why didn’t they take him directly to [Brigham and Women’s]?’’

Pruneda said Tavarez was taken to the Brigham because medical staff at the other two hospitals could not provide the care he needed.

Faulkner and Shattuck officials did not return calls, and Brigham and Women’s declined to comment, citing patient privacy laws.

Relatives and the consulate said federal officials did not tell them that Tavarez was sick until Saturday, two days before he died. Federal officials should have called them sooner, they said, so that relatives could monitor his care.

Tavarez suffered from diabetes and high blood pressure, family members said, but was otherwise healthy and strong, and he exercised daily.

Moore said federal officials called relatives as soon as Tavarez was taken to the hospital.

“I don’t have any information to indicate that he was sick for any length of time prior to the 16th,’’ Moore said.

Tavarez was fighting deportation in jail because he wanted to stay close to his family, including his only child, Judith, 23.

It was a tough case: Tavarez had defied a 1988 deportation order and had two drug convictions, one in the 1980s in New York and another in 2007 in Rhode Island for a small amount of cocaine.

However, he avoided deportation until 2008, when State Police stopped him in Warwick for motor vehicle violations and discovered the deportation order.

But relatives said Tavarez maintained hope that the government would let him stay. They said that the drug cases were minor, and that he had succeeded in reopening his case in immigration court. They said that they spent more than $20,000 in legal fees, and that Tavarez filed his latest appeal in September.

“I always asked him, ‘Pedro, are you sure you want to keep fighting?’ ’’ said his sister, Milady, who lives in the Bronx. “He told me, ‘No, I’m going to wait until the end, now that I have waited so long.’ ’’

On Monday, his family in New York laid him to rest in St. Raymond’s cemetery in the Bronx. His father had urged them to send Tavarez’s body to the Dominican Republic, but his sister insisted that he stay.