Atheist group has similar campaigns in cities across US 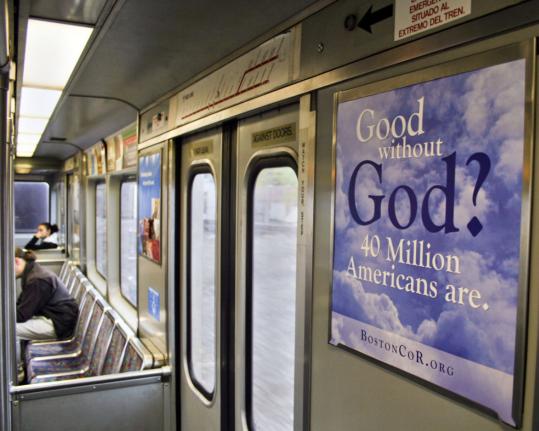 The ad campaign by the Boston Area Coalition of Reason started appearing on the T Monday. (Steve Klise for The Boston Globe)
By David Abel Globe Staff / October 28, 2009

Beside ads beckoning believers to explore Islam, attend services at the Boston Chinese Evangelical Church, or learn about the healing powers of Christian Science, the walls of the city’s subway cars will make room this month for another creed: nonbelief.

A group called the Boston Area Coalition of Reason has spent $11,000 to buy ads on more than 200 subway cars on the Red Line and Green Line to raise awareness about people who believe that God is a myth. Surveys suggest that they account for an increasing number of Americans.

The ads, which were unveiled yesterday and will be up for the next month, are set in a background of blue sky with puffy clouds. The bold-lettered message reads: “Good without God? Millions of Americans Are.’’

“The point of this ‘Good without God’ campaign is to reach out to the millions of humanists, atheists, and agnostics living in the United States,’’ said Fred Edwords, head of the United Coalition of Reason, which is sponsoring the campaign in Boston, as well as similar efforts in New York, New Jersey, and Chicago. “Nontheists sometimes don’t realize there’s a community out there for them, because they’re inundated with religious messages at every turn. So we hope this will serve as a beacon and let them know they aren’t alone.’’

The national coalition, funded by an anonymous donor, has already sponsored ads this year on billboards and transit systems in cities including Dallas; Charleston, S.C.; Des Moines; Phoenix; and New Orleans, with the message: “Don’t believe in God? You are not alone.’’

It plans ads for another 10 cities, which will coincide with the publication of a book titled “Good Without God,’’ by Greg Epstein, a member of the coalition’s board who is the humanist chaplain at Harvard.

The coalition’s ads follow campaigns by other groups, such as billboards and signs posted last year by the Freedom from Religion Foundation of Wisconsin, including one beside a nativity scene in the US Capitol that read: “There is only our natural world. Religion is but myth and superstition that hardens hearts and enslaves minds.’’

The new ad campaign does not bother Dave Schmelzer, the lead pastor at Vineyard Christian Fellowship in Cambridge, which has been posting its own ads on the T for a decade.

“Their message seems uncharitable and hopeless, but I do think it’s possible to be good without God,’’ he said. “Yet I think they’re preaching to the choir in Boston. They’ll find a lot of people who agree with them.’’

He said he can’t complain about the MBTA allowing the ads, because “that would be hypocritical.’’

Other religious groups that have bought ads on subway cars include the ReUnion Christian Church; Hope Fellowship Church; Catholic Charities; the Islamic Society of Boston; the Second Church of Christ, Scientist; and the Boston Chinese Evangelical, say officials of the Massachusetts Bay Transportation Authority.

Joe Pesaturo, an MBTA spokesman, said there have yet to be any complaints about the ads, which began appearing on subway cars on Monday.

They have been emboldened, he said, by a raft of best-selling books, including Sam Harris’s “The End of Faith,’’ Christopher Hitchens’s “God Is Not Great: How Religion Poisons Everything,’’ and Richard Dawkins’s “The God Delusion.’’

They also point to polls suggesting that the numbers of nonbelievers are increasing.

A 2007 Pew Research Center for the People & the Press, for example, found that 20 percent of Americans surveyed between the ages of 18 and 25 say they have no religious affiliation or consider themselves atheists or agnostics, nearly double the percentage of those who said that in a similar survey 20 years ago.

Another Pew survey that year found 12 percent of Americans surveyed who were 20 and older described themselves as not religious, up from 8 percent in 1987.

“There will be conservatives upset about this, because they don’t want nonbelievers in the public space,’’ Prothero said. “But I don’t think the people sponsoring this campaign are evangelistic or want Christians to read the billboards and realize the error of their ways.

“I think this is more of a coming-out party for atheists,’’ he said. “It’s about achieving a public recognition. I think this group is about not wanting to feel invisible.’’