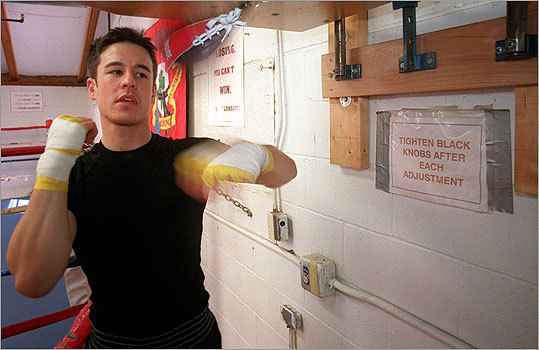 Paul Langone of Reading in 1998, as a 21-year-old Golden Gloves boxing title holder. On October 27, 2009, Langone shot a psychiatric patient who stabbed his doctor in a Mass. General clinic. Langone is a Boston special officer, a designation given to trained security guards who are authorized to carry firearms and make arrests. (Tom Landers Photo)
By John Vellante Globe Staff / October 28, 2009

The following article originally appeared in The Boston Globe on March 1, 1998

Just your typical disagreements between a boxer and his trainer, nothing to be too concerned about. It's an everyday happening in the wacky world of boxing. Just ask Oscar de la Hoya. Or Evander Holyfield. Or Mike Tyson. They've all had disagreements with their trainers and they've all wound up champions.

And so has Langone, a Reading pugilist who recently won the Lowell Golden Gloves title in the 156-pound novice division by knocking out four straight opponents -- two of them in the first round. He then drew the wrath of Murphy when he opted not to advance to the open division.

``First he was going to fight, then he changed his mind,'' said Murphy, who trains Langone out of his Fighting Sports Gym in Woburn. ``But he never told me that. I found out at the last minute from someone else. It's that habit of his, of just blowing me off, that gets me upset. He left me holding the bag with Golden Gloves officials. By not fighting, he forfeited his chance at the New Englands and a shot at the national team. Now he has to wait another year.''

``I know it upset Denis,'' he conceded, ``but it would have meant fighting the very next night. I won on a Tuesday and I would have had to fight again Wednesday. I was in a tough fight, I took a standing eight count in the second round. That fight took a lot out of me. I wouldn't have been prepared to fight again so soon, and when I fight I like to be ready.''

Murphy continued the war of words by pointing out that he had one fighter, Jim Lally, who fought four times in one night in 1991 and wound up being that tournament's outstanding boxer.

Despite their differences, Murphy sees promise in Langone; they both said they hope things can be patched up. Langone was Murphy's only Golden Gloves champion this year, although he did train 16-year-old Brian Chairy of Billerica to the 165-pound final.

``Don't get me wrong,'' said Murphy, ``he's a nice kid and he does all right when he's in the ring, but he could do a lot better. We have a difference in philosophy. Mine is he has to spar. His is he doesn't. He's not going to win every fight by knockout. He has to be able to box.''

Langone says he can explain this, too.

``I don't mind sparring, but I'm fighting at 156 and he lined me up with a 180-pound partner, a real brawler, a week before the Golden Gloves start,'' said Langone.

``Hey, I have to look out for myself. We just think different ways. He says that I'm not serious, that I don't train or spar enough, but he's not always in the gym when I'm there. I trained harder for this Golden Gloves than ever before. I was ready.''

Apparently so. On his way to the final, he knocked out Takmar Ahmed in the second round, and both Ron Watts and James Rettman of Lexington in the first. That set up the title match with Matt Lucey of Haverhill. Langone won the first round and lost the second, before putting down Lucey for good at 46 seconds of the third with a solid left-right combination. That raised his amateur record to 8-2. All eight wins have been KOs.

``In the gym, I can box and fine tune things,'' said Langone, ``but when I'm in the ring, I want the knockout. I don't want to leave anything up to the judges. You never know what fight they're watching. I've seen too many rotten decisions. Marvin Hagler said it best when he said he liked to bring his own judges into the ring, referring to his own two fists.''

Langone, who landscapes with two cousins, Jeff and Mat Previte, when he's not boxing, was introduced to the fine art of pugilism by a friend, Trevor Rudolph, back in the fourth grade, and by his uncle, Cliff Goyette, who had a noted amateur career. He trained on his own until hooking up with Murphy two years ago.

Murphy got Langone a few amateur bouts and then entered him into last year's Golden Gloves event, where he had first-round knockouts of Paul Jacklin and Steve Becker before losing a semifinal decision to eventual champion Frank Sullivan. It was a bout that Langone and Murphy agree ``could have gone either way.'' In between last year's Golden Gloves and this year's, Murphy kept Langone busy with bouts in Burlington and Manchester, N.H.

In addition to his loss to Sullivan, he also dropped a three-round decision to Canadian Golden Gloves champion Steve Cormier; Langone says he was just awful in that fight.

``I had to drop from 156 to 147 in a matter of days to make the weight,'' said Langone. ``I didn't eat or drink and I was defenseless when I stepped into the ring. I took a beating. I had no energy to defend myself. It was a learning experience. I'll never do that again.''

Langone says for most of his fights, the males in his family, including his father, Paul, and brother Steve, who plays baseball at Boston College, are on hand to cheer him on. ``But not my mother or grandmother, they hate it, they want no part of it,'' he said. ``I don't know what they'd do if I decide to turn pro,'' something Langone says he'd consider if he could make all the ``right connections.''

Murphy, who won the Golden Gloves open cruiserweight division in 1985 and holds a third degree black belt in karate, says Langone could have a future if . . .

``We've come a long way together,'' he said, ``but he has to realize I've been around this game a lot longer than he has. I've seen kids just like him come and go. If he wants to spar, if he wants to train, if he wants to be serious, things could come together for him. If he'd just listen to the voice of experience, things could be a lot better.''

To which Langone replies, ``We'll see what happens.''