Apple gets to fly banner, despite rules 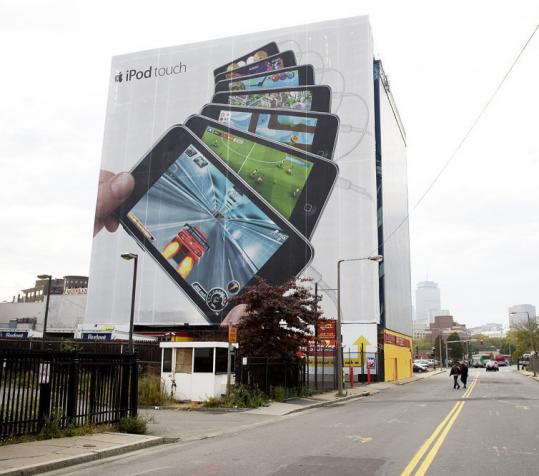 An ad for the Apple iPod Touch is displayed on the side of a Planet Self Storage site in Boston. (Yoon S. Byun/Globe staff)
By Stephanie Ebbert Globe Staff / October 23, 2009

The mayor’s campaign treasurer acknowledged this week that he called the Boston Redevelopment Authority two years ago about the permitting process for a massive iPod banner ad along the Southeast Expressway, an outsize display that Mayor Thomas M. Menino’s administration ultimately endorsed, despite its usual discouragement of new billboards.

The iPod banners began appearing in fall 2007, six months before the mayor presided over the opening of the city’s first Apple flagship store in the Back Bay. The banners are hung on scaffolding, obscuring a 13,750-square-foot wall mural of whales on a Planet Self-Storage building near the Boston Herald in the South End.

Almost immediately, the state Outdoor Advertising Board called the advertising “illegal’’ and ordered it taken down. A legal conflict ensued and iPod ads remained in place even beyond the one-year temporary permit. In June, the companies behind the ad finally reached an agreement with the state attorney general’s office, which required them to pay the state $110,000, the largest known state settlement for an outdoor advertising dispute, and seek a new permit from the city. That same week, the BRA director recommended that the permit be approved.

In an interview Wednesday, David A. Passafaro, a top Menino campaign aide and longtime confidant acknowledged that he called the BRA in 2007 to ask about the permit process for Greg John, a business acquaintance who put together the ad deal. Passafaro said that he “made a phone call and found out’’ that the temporary banner ad would need BRA approval before it could get a building permit from the Inspectional Services Department.

Passafaro, who was Menino’s chief of staff for three years in the 1990s, acknowledged that his inquiry might have been misconstrued as an endorsement of the project.

“Yeah, I suppose,’’ Passafaro said. “I could see that someone might think that I was asking for something, and I was not.’’

John - chairman of a small Charlestown branding firm, Kelley Habib John - has been a regular contributor to Menino, giving the maximum $500 each year since 2005. In April, he was one of four Menino supporters who helped Passafaro cohost a breakfast fund-raiser for the mayor that collected maximum contributions from a half-dozen people linked to the iPod deal, including the father and son whose company creates the banners, advertising representatives from Hollywood, and a Minnesotan who co-owns the self-storage facility’s management company. John’s three partners at KHJ and two employees of the firm also gave maximum contributions that day.

“I’m proud to help the mayor,’’ John said. “I asked them to donate, simple as that. I asked all the contractors we deal with.’’

John created a separate company, Box I LLC, to oversee the Apple ad and similar deals. The other partners on the project, Planet Self-Storage and IPS Media, declined to comment.

Both John and Passafaro said that they merely discussed the permitting process at some point in 2007 and that Passafaro did not work for the deal.

In initial interviews, John said he had “absolutely no business relationship with David Passafaro,’’ and expressed surprise that Passafaro’s name came up in connection with the iPod deal.

Later, John said that he had forgotten he had asked Passafaro about the process and that he did not know Passafaro had contacted the BRA to make sure his information was accurate.

“Over two years ago, in an unplanned chance encounter at a public event, I casually asked David Passafaro about the process required to obtain a legal sign permit,’’ John said in a prepared statement. “He soon got back to me with the normal process, which was to submit an application, stamped engineering plan, and drawing to the BRA and ISD. Recently, because of your inquiry, I learned that David did call the BRA to confirm the process. I followed this lengthy and normal process to the letter of the law, as any person off the street would do. His information to me was 100 percent procedural. No call was made ‘on my behalf.’ ’’

The Menino administration discourages outdoor advertising and prohibits new billboards in most neighborhoods, BRA spokeswoman Susan Elsbree said. Temporary permits are often given for banner ads like the iPod ads, but the BRA typically favors signs that advertise vacant apartments or promote events like the Boston Marathon.

“We generally do not favor straight advertising,’’ said BRA chief planner Kairos Shen. “We look more favorably on signs that are related to programming and the building and the specific events, and we allow sponsorship.’’

Shen, who oversees signage, said he was never asked to examine design plans for the iPod ad before it went up. The plans, which the BRA could not produce, were stamped by someone from the urban design team in his office and were not viewed as controversial, he said. There was no public notice of the ad before it went up, and it has not generated any public complaints, city officials said.

In hindsight, Shen said, he would have recommended scaling down the iPod ad before allowing it in Boston.

“It is big, and the one thing [the BRA] should have done is to reduce the size,’’ Shen said.

The ad got a building permit after Harry Collings, then the BRA’s executive secretary, sent a “time-sensitive’’ fax to the city’s Inspectional Services Department on Oct. 24, 2007. Collings did not return calls for comment.

“Greg John will be contacting you directly regarding this request,’’ he wrote to Assistant Commissioner Gary Moccia. “This request is for a one year only temporary permit.’’

Attached was a letter of support for signage from Jay Walsh, director of the mayor’s Office of Neighborhood Services, who acknowledged in an interview that his office typically does not weigh in to support billboards.

“Generally, the feedback from the community is they don’t like them,’’ Walsh said. But in this case, he said, the BRA had given its approval, the ad was not expected to be permanent, and there were no complaints from neighbors. He said Passafaro never contacted him about the application.

A factor driving the BRA’s approval, Elsbree said, was the agency’s past approval of temporary advertising in that same area, at the Pine Street Inn, which was allowed to sell ad space on its tower for eight years to finance renovations.

The permit for the temporary iPod ad expired last fall, but documents show that the partners did not file for a new permit until June, when they were settling their dispute with the state. The settlement did not include any admission of guilt or illegalities.

At some point, Passafaro said, John contacted him again asking how to get a renewal, though Passafaro could not recall whether he contacted the BRA again.

The Outdoor Advertising Board has argued since 2007 that the ad’s owners should have sought its approval for the sign. If they had, it would have been rejected because of its size and proximity to other signs, according to Edward J. Farley, the board’s executive director.

The owners, however, said they are exempt because their ad promotes sales on the premises: Inside the Planet Self-Storage facility, a customer can buy iTunes gift cards, along with packing tape and locks.

John said similar “on-premise’’ ads are used to promote beer and the Boston Bruins at the TD Banknorth Garden and alcohol at a North End restaurant.

The self-storage company is renovating to create a larger retail space for Apple products in an effort to satisfy the Outdoor Advertising Board. If it does not satisfy the board, the ad will have to be taken down in Feburary.