Gun clubs all fired up at proposed regulations

Patrick administration aims to improve firearms safety, but organizations say rules would be a financial burden 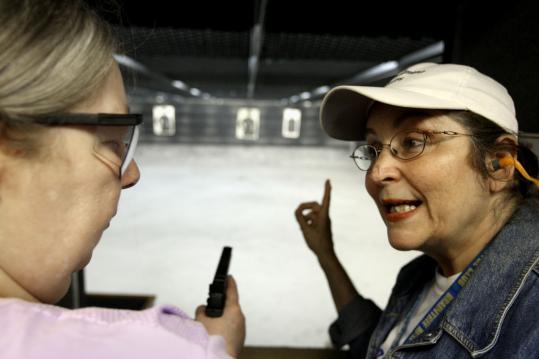 BRAINTREE - Once a month on a Saturday, the Braintree Rifle & Pistol Club hosts the Second Amendment Sisters, a national organization that advocates and provides firearms training for women.

Women who have never held a gun before are invited to learn to shoot. The club provides the weapons and ammunition, and the cost to the woman learning typically does not exceed $10.

The novices will have different goals: Some want to feel safer when walking through a dark parking lot at night, some want to learn to hunt, others had been in abusive situations and want to protect themselves.

Norwood resident Lynne Roberts, who founded the Massachusetts chapter of the Second Amendment Sisters, named after the constitutional amendment securing the right of citizens to bear arms, wants to expand the training program to other gun clubs, and to start a “little sisters’’ program for females under 18. But she says her organization may cease to operate if new regulations for gun clubs are adopted.

The regulations are being proposed by Governor Deval Patrick after an 8-year-old boy accidentally killed himself with a machine gun at a gun club event in Westfield last October.

If adopted, the regulations will require clubs to obtain special licenses, a police detail, and have one certified firearms safety instructor for every 20 attendees (or one for every five attendees if children are present) at all events that are open to nonmembers. The regulations would also require clubs to submit a safety plan to the local police department 30 days before each public event, and would ban machine guns from all public events.

A spokesman for the state Executive Office of Public Safety and Security said these regulations are aimed at improving gun safety. Having a trained instructor and police detail present, the spokesman says, will add a few layers of protection for participants and observers at gun events. Currently, there are no state regulations governing how gun clubs operate.

But many club members are outraged. They say the regulations will make it financially impossible to continue with events that are open to nonmembers - such as shooting competitions, gun safety classes, and special programs for women. And the presence of a police officer could intimidate women and create a negative perception about the program, while having to write a safety plan will be a logistical nightmare, said Roberts.

“It’s going to put us out of business,’’ she said.

At the Sportsmen’s Club in Holbrook, “Lady’s Night,’’ a monthly class that offers one-on-one instruction to women for $5, may be discontinued, too, because the club will not be able afford a police detail, said club president Jerome Rivers.

Also, it would not be as easy to hold competitions among gun clubs.

“We wouldn’t be able to have nonmembers shooting at the club,’’ said Eric Goldman, president of the Braintree Rifle & Pistol Club, whose ranges are used not just by gun club members and the Second Amendment Sisters but also security officers from Harvard and Boston universities; police officers from Braintree, Quincy, and Randolph; Air Force Reserve officers; and students from North Quincy High School.

The club’s shooting competitions date to 1871, said Donald Kusser, the club’s vice president. Kusser, who has competed for 35 years, compares it to baseball or football season.

“They want to take all the enjoyment away from me,’’ he said of the proposed regulations.

Approximately 150 people attended a public hearing this summer to voice their opposition, and more than 50 state legislators have signed a letter to the Patrick administration stating that the proposed rules will put a burden on organizations that provide firearm safety education. Among those who signed are two legislators who represent Westfield, Senator Michael R. Knapik and Representative Donald Humason Jr. They did not respond to phone calls seeking comment for this story.

“I understand that there was a tragedy, but the regulations as proposed are very overreaching, and would pretty much shut down any gun course across the state, because it would make it cost-prohibitive to run any gun practice or shoot,’’ said Representative George Peterson, a Republican from Grafton who is leading the effort against the regulations.

Peterson also said machine guns should not be prohibited. “If I own an automatic firearm that I am licensed for, why wouldn’t I be able to use it on a range?’’ he asked. “ of the matter is, 99 percent of the time there’s never been a problem.’’

However, accidents do happen. At the Marshfield Rod & Gun Club, a man injured his hand when his gun misfired in 2006, a club official confirmed. In September 2005, a man was killed at the Scituate Rod & Gun Club. The club is also being sued by 15 neighbors who allege that four bullets from its shooting range have stuck nearby houses over the years, a claim the club’s attorney denies. A year ago, a Scituate woman missed injury when a bullet shattered the window of her home. According to a police report, there was a competition at the gun club that day.

Gary Meyerson, who lives across the street from the house that was hit by a bullet, said the proposed regulations do not go far enough. For the rules to make a difference, he said, they should be enforced by the State Police, because local police hold their shooting practices at the local gun clubs and stay on good terms with them, and would not necessarily be effective at enforcing new regulations.

State Senator Robert Hedlund, a Weymouth Republican who signed the letter against the proposed regulations, said he doesn’t believe the new rules would have prevented the accidents in Scituate, which is part of his constituency.

“That 8-year-old who was allowed to have an Uzi would be alive today if these regulations were in place,’’ he said.

Rosenthal said he does not buy the argument that gun clubs’ events will go away if the regulations are adopted. The National Rifle Association has vast resources to help out with expenses for police details, he said.

“If the events are popular and worthwhile, they will take place even if it costs a little bit more to ensure safety,’’ he said.

Jim Wallace, executive director of the Gun Owners’ Action League, which represents Massachusetts gun clubs and is affiliated with the NRA, said the governor has deep pockets, too.

“If the governor wants something, let him pay for it,’’ Wallace said. “It’s time that the state of Massachusetts starts paying for the absurd regulations that it has in place.’’

He said gun clubs are already very safe, and nothing more needs to be done to prevent the type of tragedy that occurred in Westfield from happening in the future. With only two fatalities at Massachusetts gun clubs in four years, “it’s one of the safest sports there is,’’ he said.

While there are no state regulations for gun clubs, according to the Gun Control Act of 1998, all new firearm applicants must complete a firearms safety course or a hunter training course. Police officials in Massachusetts can arbitrarily deny a handgun license or require an individual to submit reference letters before issuing a license, Wallace said.

The Patrick administration is still taking and reviewing testimony from the public on the proposed regulations, said Terrel Harris, spokesman for the Executive Office of Public Safety and Security. He said the new rules are not a response to the Westfield accident per se, but a comprehensive package to create a safer environment for those who use guns.

“These were reforms that needed to be made,’’ he said. “They are just overdue.’’

Gov. Patrick’s
proposed gun club regulations
► Would require clubs to obtain special licenses, a police detail, and have one certified firearms safety instructor for every 20 attendees (or one for every five attendees if children are present) at all events that are open to nonmembers.
► Clubs would be required to submit a safety plan to the local police department 30 days before each public event.
► Machine guns would be banned from all public events.