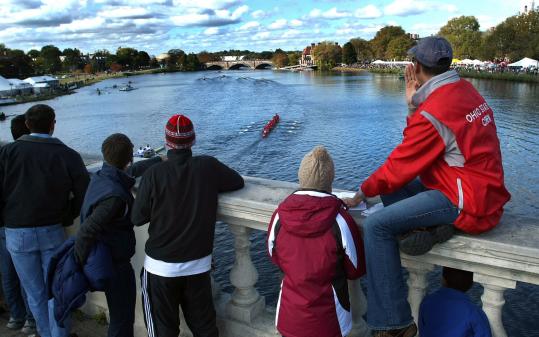 Judy Filkins stood in the cold yesterday, rubbing her hands together and talking excitedly about the Head of the Charles Regatta. Though she was not racing this year, she volunteered so she can be close to the action.

“My son inspired me to go back,’’ said the native of Hartland, Vt. “It’s been wonderful to be back in the water.’’

Filkins joined thousands of athletes, their relatives, and fans braving yesterday’s chilly temperatures for the 45th installment of this annual rite of autumn. Row upon row of racing shells lined the parking lot off Soldiers Field Road in Boston near the staging area for the race.

It was a colorful spectacle of crews gliding swiftly over the placid Charles River. Participating in the event this year were more than 8,500 rowers from across the world.

Hannah Rooney, a Boston University freshman and a novice rower, explained the vast importance the regatta holds to the racing community.

“This is like Christmas for us,’’ she said. “This is what we look forward to all year.’’

The shore was dotted with fans before the first races began at 7:45 a.m., with crowds stretching along the 3-mile race course. Even in the early afternoon, the temperature was about 48 degrees with a 17-mile-per-hour wind, making it feel as if it were 42.

Spectator Lynn Heinz of Freeport, Maine, said she did not mind the cold. She and her husband Bill have developed a strategy for the event and the widely varying temperatures this time of year.

“We’ve been here in 70-degree temperatures and the pouring rain,’’ Heinz said. “The trick is to make friends with someone in the boat clubs so you can watch in style.’’

The athletes were undeterred by the cold.

Natalie Hoppel, a race coordinator and rower for the Riverside Boat Club, said sheer will and enthusiasm for the sport keeps rowers focused, no matter what the conditions.

“It’s a true dedication that marks the athletes,’’ she said. “They’re participating in a sport that a lot of people don’t know about, and chances are you’re not going to become famous for it. They do it because they have a real passion for the sport.’’

The event is the largest regatta of its type in the United States, according to race coordinator Alan Day.

Day, who has been rowing since 1965 and has worked for the regatta for the past 25 years, says the attraction of rowing lies in its blend of “physicality and meditation.’’

“The more tired you are, the deeper you have to dive to find that focus to finish the race,’’ he said. “In a team, you feel part of something special.’’

Filkins recalled the moment when she decided to feel part of something special after so many years away from the water.

“I was watching one of my son’s races, and his boat was in second place by a few seconds,’’ she said. “I saw the look on his face, what he was feeling, and I knew I wanted to feel that way again.’’