A new vision for Perkins 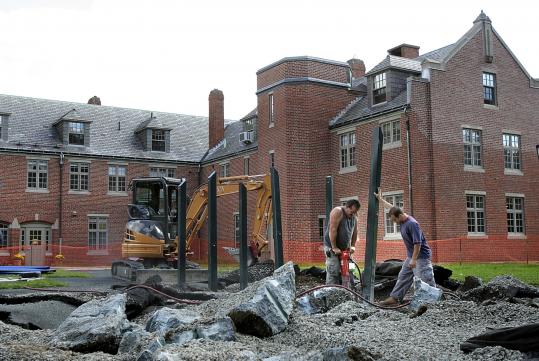 In the world of education, the Perkins School for the Blind has an elite roster of graduates, including Helen Keller, her “miracle worker’’ Anne Sullivan, and Laura Bridgman, the world’s first deaf and blind person to learn language.

But the Gothic halls and stairways at the country’s oldest school for the blind, where the clock tower chimes like it is a university campus, no longer serve well some of the students studying at the Watertown institution.

“We’re saving babies at much earlier gestational ages, or kids with severe medical conditions or complex medical issues,’’ said W. Robert Hair, supervisor of the Lower School, where Perkins teaches its youngest students, ages 6 to 14. “We’re able to treat them more effectively. And so as a result, there are kids with more complex issues: cognitive issues, physical limitations, wheelchairs, walkers, with blindness. Those are the kids we’re getting more of at these special schools across the nation, more complex students. We just have a more diverse population.’’

Now, for the first time in a century, Perkins is constructing a new Lower School classroom building designed to accommodate the changing needs of its students.

The $30 million facility will accommodate wheelchairs and allow students to be more independent, moving more easily through the hallways rather than crossing the campus, accompanied by an aide, for some classes. The new building will be fully accessible, air conditioned (the school year lasts 11 months), and designed with new technology in mind.

“When the buildings were originally built, they were built for students who were very mobile, and a lot of the rooms are quite small,’’ said Cynthia Essex, who started here as a teacher 40 years ago and is now head of the school’s Secondary Program, which covers its older students.

Education for the blind has changed dramatically since Perkins opened its doors nearly 180 years ago. As medicine advanced, many of the causes of blindness - meningitis, scarlet fever, cataracts, sexually transmitted diseases passed on at birth - became treatable.

Educational philosophies also changed from the days when blind students were considered unable to be taught or, later, only in special institutions. Once special schools for the blind opened, students were sent away from their families to places like Perkins, living on campus to learn the activities of daily living, from using utensils for eating to managing money. Parents often had little involvement in their education.

But the mainstreaming movement of the last 30 years has meant most blind students now live at home.

Currently, about 90 percent of students who are visually impaired attend public schools, according to Steven Rothstein, president of Perkins. Of the students who live on the Watertown campus, some are from communities too small to have Braille teachers.

“That’s been a philosophical shift in the past 30 years, having kids live at home and go to public school whenever possible,’’ Hair said. “Along with the shift to mainstreaming, we’ve also had wonderful advances medically.’’

At Perkins, ground was broken earlier this month on the planned 55,000-square-foot building. School officials hope the new building will be ready to open in early 2011.

Today, Perkins has an enrollment of about 200, mostly day students. The Lower School, where the new classroom building will be erected on a grassy lawn, has 38 day students and 12 students who live on campus.

The rooms at Perkins are marked with objects that students can feel to tell them where they are. The bathroom doors are marked with smooth tiles; the gym has a small, plastic ball as its identifier.

Perkins, incorporated in Boston in 1829, was created by reformers who wanted to address many social problems, including poverty and mental illness.

Dr. John Dix Fisher, considered the founder of Perkins, was moved to create the school after seeing a school for blind children in Paris while he was studying medicine. Fisher later helped found Massachusetts General Hospital.

In 1839, Perkins became the first school in the world to teach language to a deaf and blind child, Laura Bridgman. In 1888, Anne Sullivan, a teacher for the blind, brought Helen Keller to Perkins to study.

“Oh, what happiness!’’ Keller later wrote. “To talk freely with other children! To feel at home in the great world!’’