Unsafe at any speed 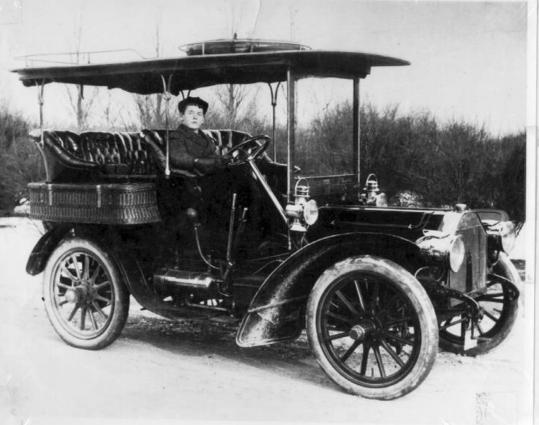 This photo, which dates to 1908 or 1909, shows an unidentified youth who at age 11, was said to be the youngest licensed driver in Massachusetts - and a chauffeur. (Stewart Berg/ Larz Anderson Auto Museum)
By Peter DeMarco Globe Correspondent / October 13, 2009

Harry MacLeod didn’t know what hit him. One minute, the physician was driving down Blue Hill Avenue in Dorchester, returning home from a house call. Then . . . boom! A speeding trolley rammed his car, sending him flying as onlookers gasped.

“Before I crossed the track I tooted my horn several times and glanced . . . to see if a [trolley] car was approaching. I neither saw a car nor heard a bell,’’ Dr. MacLeod, who escaped unharmed, told the Boston Daily Globe.

The trolley operator, however, told a far different account of the accident, which was splashed across the newspaper’s front page on Jan. 11, 1909. He said the automobile driver carelessly swerved into the path of his trolley, “making it impossible for him to stop in time to avoid the collision.’’

The story didn’t determine who caused the accident. But given the chaotic state of driving 100 years ago, how could anyone have known?

Back then there were no street signs, no stop signs, no traffic lights, no double center lines, no traveling lanes, and no yield signs. Automobiles had to battle horse-drawn carriages and wagons, bicyclists, trolleys, and pedestrians for space on the road. And while we joke today about how infrequently we obey traffic laws in Massachusetts, a century ago, there were scarcely any laws to obey.

Well, that’s not entirely true. This year marks the 100th anniversary of Boston’s first traffic regulations, as issued by the Board of Street Commissioners. I tracked down a copy in a very old, worn book in City Hall, discovering some interesting facts about what appear to be our state’s earliest driving rules.

A number of the laws are still very much in use today. Boston got its first one-way streets, adopted a new rule requiring drivers to “signal if about to turn,’’ and began requiring drivers to pass on the left - all in 1909. Parking within 10 feet of a curb corner was prohibited, double parking was outlawed (well, at least on paper), and police, fire, and other emergency vehicles (including postal carriers and doctors) were given the right of way.

But the rules also show how little our state’s first motorists actually knew about driving, and how Boston streets were really a free-for-all. Drivers had to be told not to stop in the middle of the street, not to park on sidewalks, and not to drive in reverse. The regulations include basic diagrams, reprinted in newspapers for all to study, explaining how to properly make a right turn, a left turn, and a U-turn - revolutionary stuff in 1909, when license exams consisted of a paltry 12 questions.

The most humorous one shows a car driving headlong into traffic on the opposite side of the street, with the prudent instruction: “NOT THIS WAY.’’

“You have to think of it like this: Most of us have been driving for over a decade, and we drive thousands of miles a year; if you’re driving just 5 miles a month, and maybe that back then, you have no experience,’’ said Tyler Burns, director of the Larz Anderson Auto Museum in Brookline.

Just how inexperienced were some drivers? “I have a picture of the kid who was the youngest licensed driver in Massachusetts,’’ said Stewart Berg, a volunteer historian for the museum and the Registry of Motor Vehicles. “I think it was taken around 1908, 1909. He was 11 years old. He was someone’s chauffeur.’’

Driving in 1909 was dangerous, fairly uncomfortable, and often an inefficient way to travel. Cars had been around for less than 20 years, varying widely in quality and reliability. Henry Ford’s famous Model T, the first mass-produced car, was new to America, debuting in October 1908.

Yet, people still loved the automobile: Like us, our motoring forefathers had an almost instinctual need for speed.

Though most cars couldn’t go faster than 35 miles per hour, serious accidents were commonplace. The Massachusetts Highway Commission recorded 989 injuries and 54 deaths (including pedestrians) in motor vehicle accidents in 1909, and that was with just 24,000 registered cars. If you applied that fatality rate to the number of vehicles in Massachusetts today, we’d have 12,000 people dead on the roads each year.

Most cars were rudimentary, lacking not only turn signals, brake lights, and treaded tires, but also speedometers, windshields (thus the need for driving goggles), roofs, shock absorbers, power steering, and heat (necessitating leather driving coats and gloves). Steam-engine cars could explode, while hand-crank starter rods could spin back and break your arm. To apply brakes, you pulled hard on a lever. Seat belts, alas, didn’t exist.

“Occupants, usually women, sat on jump seats facing each other, one hand on their heavy headgear, the other grasping a seat handle,’’ reads the 1949 history book “The Merry Old Mobiles’’ from the auto museum’s library. “Sometimes the chuckholes and thank-you-ma’ams of the road proved too much for these rear occupants and they were pitched out bodily.’’ Car engines were so loud, that drivers sometimes didn’t realize they’d lost a passenger until they got home.

Roads were fraught with problems as well, with 99 percent of them unmarked and unpaved, virtually guaranteeing a blown tire on any substantial trip. There were few through roads; numerous country byways simply ended at a town line, leaving little choice but to turn around and head back home.

Nonetheless, on a good road, a car could easily outdo a galloping horse. The biggest reason to own a car, it seems, was to show off how fast it could go.

Drag racing was so pervasive that A.B. Fletcher, the highway commission’s first secretary, warned attendees of the 1909 Boston auto show that they would lose their licenses if they were caught speeding.

State legislators also tried their best to curb the problem, establishing state speed limits of 15 miles per hour on long roads, 10 m.p.h. in business districts, and 8 m.p.h. when driving along a curve. Speeding fines were enormous, starting at $25 - the equivalent of $600 today, according to the scholarly website www.measuringworth.com.

Of course, no one had a speedometer in his car to know how fast he was going. Nor did the police have any way to record speeds, or patrol cars to catch violators - though they probably could have tracked them down.

“Someone comes flying down your street and you know exactly who he is because clearly he is affluent enough to be able to purchase a car,’’ Burns said, adding that owners usually belonged to driving clubs with wine cellars and the like. “There’s a lot of animosity toward the automobile in the beginning because it’s a rich man’s toy.’’

But looking back, that climate was certainly changing by 1909.

The state’s first traffic census, conducted that year, showed that 42 percent of vehicles on the roads that summer were motorized.

State legislators, after creating license plates in 1903, had established basic rules regarding car registrations, licensing, and even drunk driving, while Boston’s traffic rules, basic as they were, provided a sorely needed role model for all of Massachusetts.

In fact, if you believed the headlines of the day, you might even think driving is worse today than it was a century ago.

Peter DeMarco writes the column Who taught YOU to drive? for the Globe’s regional sections and updates a Facebook page of the same name. He can be reached at demarco@globe.com