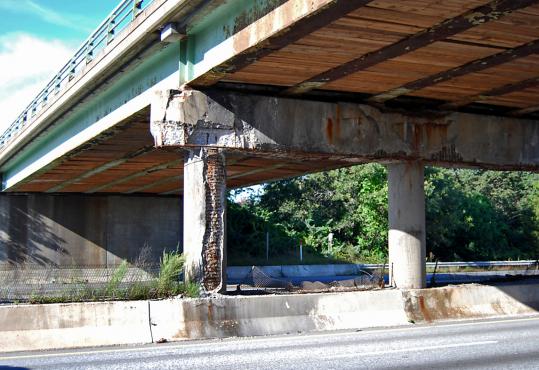 Reader Maria Vickers says she is terrified that a Lowell Connector bridge over Interstate 495 in Chelmsford is in such bad shape. The structure was inspected and put on a list for repairs.
(Alan Vickers for The Boston Globe
)
By Christina Pazzanese Globe Correspondent / October 10, 2009

Tipster Maria Vickers makes the daily drive from Malden to Marlborough along Interstate 495 and right past what she tells GlobeWatch is a “tragedy waiting to happen.’’

A concrete highway support structure on I-495 north at the junction of Route 3 in Chelmsford, a ramp associated with the Lowell Connector, is significantly deteriorated and looks as if it is ready to collapse, she wrote in an e-mail. “I travel by this structure, and under the road it supports, every day, and it scares me to death.’’

“My primary concern is safety . . . both my own and that of everyone else who drives on either of these roads. Traffic frequently hangs up in this area, especially in the summer, and I’ve gotten in the habit of stopping short of the overpass and waiting until I can drive all the way under and past it. I’m so terrified of getting caught under it when it finally gives way!’’ Vickers wrote.

While driving under the structure earlier this week, a Globe reporter saw several support beams missing very large chunks of concrete that exposed the structure’s interior framework to the elements. Rust permeated the metal decking underneath the roadway and stained the concrete beams.

“I alerted the [Massachusetts] Highway Department to the condition of this structure earlier this year; they responded that it would be addressed this season, but there has been no activity here thus far,’’ writes Vickers.

Vickers did receive a brief reply from MassHighway’s District Four office last May that said the structure had been inspected and was on a list for substructural repairs once work to the Route 38 bridge at I-495 is completed.

“I don’t understand how anything else that is planned in the area can take precedence over repair of the support,’’ said Vickers.

“This is a tragedy waiting to happen, and I really don’t think this structure will survive the winter. I’d appreciate anything you can do to get this fixed.’’

THE STATE RESPONDS
The state Highway Department said that the bridge was last inspected July 27 and as a result, the substructure’s condition was downgraded. “The bridge is now classified as structurally deficient and is on a six-month inspection cycle, rather than the normal two-year cycle,’’ spokesman Adam Hurtubise said in an e-mail. “We have been aware of the condition of the substructure since a freeze-thaw inspection in May.’’

The department conducts freeze-thaw inspections of highway-over-highway bridges in the spring to assess whether they show any weather-related deficiencies, he said.

“Based on that freeze-thaw inspection, we have already scheduled the repairs to the substructure for this construction season, which ends roughly on Dec. 15, but is weather-dependent. Repair crews should be moving to the Chelmsford-Lowell line within the next few weeks to perform these repairs. “We will clean all the exposed rebar, add additional rebar, and then complete the concrete repairs,’’ Hurtubise said.

The missing concrete chunks on support beams were caused by work crews who chipped away at loose concrete to prevent it from falling into the road, he added.

The department will know more about the cost of the project once work begins, said Hurtubise.