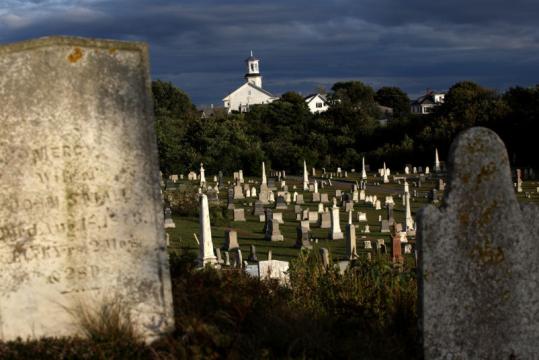 Provincetown Cemetery is one of many that are nearly out of space. (Julia Cumes for The Boston Globe)
By Peter Schworm Globe Staff / October 1, 2009

With its majestic dunes and shimmering sunsets, Provincetown is a ceaseless draw for vacationers and summertime residents. So it may be little surprise that the outer-Cape retreat also ranks as a coveted final resting place, where retirees have snatched up plots at the town cemetery like summer cottages with ocean views.

But, like all real estate in the lovely seaside town, space in the town’s only active cemetery is getting hard to come by.

The historic 20-acre cemetery is now all but full, with only the flat of a gentle northward hill unclaimed, forcing the town to halt advance sales while workers hasten to clear land for new graves.

“I can probably find a few more plots,’’ said Antonio Lemme, the town’s cemetery supervisor. “But then that’s it. I’ve been telling people for a while this was coming.’’

Provincetown’s shortage, while unusually acute, underscores a broad and burgeoning problem in the crowded Northeast. With land expensive and limited acreage available in large swaths of Eastern Massachusetts, budget-crunched communities are struggling to buy sites for new burial grounds as their existing cemeteries fill up.

Dense suburbs such as Saugus, Watertown, and Quincy are running low on space and looking to expand, and municipal graveyards in Somerville and Everett have been filled for years. Many families have been forced to look far afield for plots, and some have been denied the chance to be buried with their kin.

“It pushes people further away,’’ said David Walkinshaw of the Massachusetts Funeral Directors Association. “Land’s expensive, and this is a reality in a lot of metropolitan areas. They are looking for more space. It’s just really hard to find.’’

Scarcity of graveyard space is sure to be an intensifying problem as the baby boom generation moves through its golden years, funeral directors and cemetery officials say. Some project that the annual death rate will as much as double over the next two decades.

“When we all decide to move on to the next dimension, we are going to take up a lot of space,’’ said David Crispin of BSC Group, a Boston civil engineering firm that specializes in cemetery planning and design. “Many communities aren’t prepared for that, and in this economic climate their hands are tied.’’

In Saugus, Riverside Cemetery, built in the 1840s, expects to run out of space in less than three years, and building a new cemetery will take at least that long, officials said. That raises the somber scenario of lifelong residents having to leave their hometown to be laid to rest.

Some could choose the pricier plots at privately owned cemeteries, such as those run by religious organizations. Certain private cemeteries are experiencing crowding, though less acutely.

“This is an urgent matter,’’ said Dennis Gould chairman of the town’s cemetery commission. “But eventually, every town is going to run up against this. But to get 20 acres of land, it’s almost impossible in the suburbs.’’

Last week, the Saugus Cemetery Commission urged Town Meeting to earmark 25 acres of town land as a burial ground, but the proposal failed; others argued that the town needed the land for a school.

Securing cemetery space often winds up behind other municipal priorities, particularly in difficult economic times, and expansion decisions are consistently put off. But with the coming demographic bulge, many say, the demand for cemetery space will soon be unavoidable.

“They forget until it’s too late that people do die,’’ said Nicola Nicosia a Saugus cemetery commissioner who jokingly asked Town Meeting voters whether any expected to live forever. “But once this is filled up, it’s filled up. People have approached me and said, ‘I’ve been in town 50 years, why can’t I be buried here?’ ’’

In Norwell, the town cemetery has just two dozen plots remaining, and officials have set aside 20 acres for fresh burial land. But a protected turtle species that inhabits the property is complicating expansion.

Those worried about crowded cemeteries take solace in the growing popularity of cremation. Edward Butland of the Boston Catholic Cemetery Association said a rising number of Catholics are opting for cremation, even though the church strongly prefers casket burials.

The cremation rate, now estimated at roughly 30 percent, has risen sharply over the past 15 years and is projected to reach 50 percent by 2025.

“Each year the percentage goes up, as it becomes more accepted,’’ said Ted Bubbins, superintendent of Vine Hills Cemetery in Plymouth. “It’s less expensive, and certainly saves on space.’’

Thomas Daly, a national cemetery consultant and chairman of legislation and consumer affairs for the Massachusetts Cemetery Association, said crowded cemeteries will need to turn to denser burials and columbaria, with niches for funerary urns. With its main cemetery down to about 30 plots, Watertown, for example, is considering whether to build aboveground crypts that could hold far more caskets and urns than traditional burial plots.

“They are running out of space, so will have to be more creative in exploring other options,’’ Daly said.

In Provincetown, many who have reserved burial plots are relative newcomers to the town, and in response, town officials this week passed a rule restricting burial plots to those who have maintained a principal residence for at least two years. Still, that was a short sojourn, some said, for a chance to spend eternity in a slice of heaven.

Said Lemme, the cemetery supervisor: “We might have to make that a little stricter.’’