Coakley fund-raising off at a sprint

More than $2m tallied in a month 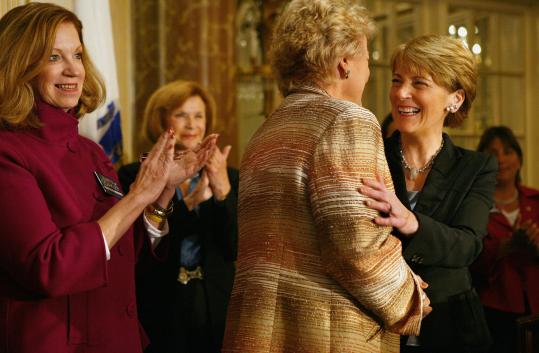 Attorney General Martha Coakley raised more than $2 million in the first month of the Senate race, her campaign said yesterday, an impressive figure that helps neutralize what was seen as perhaps her biggest vulnerability.

The fund-raising haul, which more than doubled the campaign’s publicly stated goal for September, is a show of force for a candidate who was the first to announce her Senate bid, enjoys wide leads in early public polling, and is the only contender in the race who has proven she can win statewide.

“Sometimes it pays to maybe walk softly but carry a big pocketbook, right?’’ Coakley said yesterday as she received the formal endorsement of a slew of powerful, politically connected women and EMILY’s list, the national organization that supports Democratic women who back abortion rights.

Still, Coakley acknowledged that money gets you only so far.

“Voters in Massachusetts know that’s necessary but not sufficient to win a race, or to be a good US senator,’’ she said.

With 68 days remaining before the primary, Coakley’s campaign, by 8 last night, had tallied more than $2 million for the month of September. Campaign officials said they could not yet break down how much of what they raised was for the Dec. 8 Democratic primary and how much was for the general election, on Jan. 19. They also did not disclose how much money the campaign has on hand.

Fund-raising had been one of Coakley’s biggest challenges early in the race. Because she is a statewide office holder, her campaign account is a state account and cannot be used to fund a run for federal office. Thus Coakley, after creating her campaign committee on Sept. 3, had to essentially begin from scratch.

Another contender - US Representative Michael E. Capuano of Somerville, who had $1.2 million in his federal campaign account as of July - has raised more than $300,000 in the past two weeks and has $1.1 million left in his account, his campaign said yesterday.

Celtics co-owner Stephen Pagliuca, another Democratic challenger, has raised more than $200,000, including $150,000 for the primary, according to campaign aides.

Pagliuca has pledged not to take any money from political action committees or Washington lobbyists, but his personal wealth, estimated at $400 million, could play a major factor in the race. He is already spending heavily on television advertising, airing two spots so far. His campaign has declined to say how much it is spending on the initial advertising buy.

And the campaign of state Senator Scott Brown of Wrentham, who is running for the Republican nomination, said it had raised $154,525 since Sept. 12 and has $136,000 remaining.

“Scott Brown isn’t a millionaire, and he’s not beholden to the special interests,’’ said a statement from Beth Lindstrom, Brown’s campaign manager. “But he’s winning over voters and supporters because he is the candidate with the best ideas and vision for getting our country moving in the right direction.’’

All the candidates have until Oct. 15 to file their September figures with the Federal Election Commission, and the reports should also say how much money they have spent to date. Each donor can give a campaign up to $2,400 for the primary election and another $2,400 for the general election.

Coakley has assembled a core group of leading fund-raisers, including philanthropist Barbara Lee, who is Coakley’s campaign cochairwoman; Shanti Fry, a longtime Democratic activist from Cambridge; and Todd Patkin, a Foxborough auto parts entrepreneur, who was a key fund-raiser for Howard Dean and Hillary Clinton.

Coakley has received high marks from voters during her 2 1/2-year tenure as attorney general, but she has scant experience in political races. She is the only Senate candidate who has won a statewide election, giving her the benefit of wider name recognition, but the race was a relatively low-profile election in 2006.

Capuano has tried to portray her as too cautious, a line of attack some Coakley supporters say has sexist undertones. As soon as he entered the race, Capuano began trying to draw a distinction between them by saying that she was “a little cautious and conservative’’ and that she had failed to take a stand on the Iraq war and other major issues.

“I just think he’s wrong when he suggests that somehow I’m cautious or lacking the boldness for this race,’’ Coakley said yesterday.

“That may say more about what Congressman Capuano knows about what’s happening in Massachusetts than it does about my record here.’’

When asked to name an example of her willingness to take risks, she said, “How about jumping into this race when everybody else stood by the sidelines to figure out who else was going to be in?’’

“I think that it is a plus in this race; I won’t deny it,’’ she said of her gender. “I could break into a Broadway tune of ‘I Enjoy Being A Girl.’ But I’m not going to do that. My campaign folks would kill me.’’