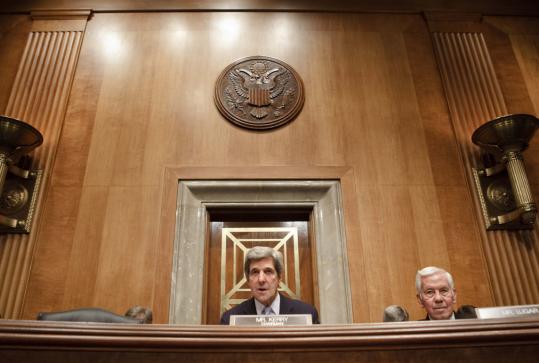 WASHINGTON - Massachusetts Senator John F. Kerry is using his influence as chairman of the Senate Foreign Relations Committee to urge the president to take weeks, or even months, to conduct a sweeping review of the overall mission in Afghanistan and generate a national debate on the war before committing more troops.

“I am arguing that the president has the time and we have the time,’’ Kerry said yesterday in an interview, adding that he himself is wrestling with the question of whether more troops are needed.

As Kerry and Obama separately struggle to determine the best course of action in Afghanistan, their deliberations show how their thinking has evolved on parallel tracks. Both were Democratic presidential candidates who campaigned with hawkish language on Afghanistan but are faced with a deteriorating security situation and an Afghan election fraught with allegations of widespread fraud. Now both are vulnerable to criticism that they are wavering in their support for a war they once said the United States must win.

Kerry argues that the new realities on the ground make it important to at least consider a radical change of course.

“It may be that we decide that more troops are essential,’’ Kerry said. “But the mission has not been adequately scrubbed.’’

Kerry’s call for caution, laid out in a Wall Street Journal op-ed article this week, gave Obama some political cover as pressure builds for a quick White House response to a request for more troops from the top US commander in Afghanistan. But Kerry is also keen to assert himself as an aggressive, independent voice.

“I work with the administration, I don’t work for them,’’ said Kerry, who plans to travel to Afghanistan in the next 10 days and to hold a series of hearings that will probably call into question the current US strategy there.

Kerry declined to characterize his relationship with the president, saying only that, as chairman of an influential committee, he “talks frequently’’ with administration officials, including the president and the secretary of state. A former Kerry aide who asked not to be identified out of concern for angering Kerry, said: “I know that [Kerry and Obama] talk a lot, in very private conversations.’’

Kerry is in a unique position to influence an administration in which the president, the vice president, and the secretary of state are all former colleagues from the Senate. In the last two weeks, Kerry has been at the White House at least twice, to meet with Vice President Joe Biden and to attend a ceremony with Obama for a fallen Massachusetts soldier.

Aides say the president and senator approach the difficult questions of war methodically, with intellectual rigor. But now, the two will be judged on overcoming the rapidly deteriorating situation in Afghanistan.

“Afghanistan was the good war, the war that Democrats could support while they opposed war in Iraq,’’ said James Dobbins, who served as Bush’s envoy to Afghanistan. “But now that things have improved in Iraq, Afghanistan has become more controversial.’’

President Obama, who campaigned on a pledge of winning the war in Afghanistan and ending the war in Iraq, ordered 21,000 additional US troops to Afghanistan in March to stem the tide of a resurgent Taliban. But support for the war has plummeted, as US deaths have risen and as evidence surfaced that President Hamid Karzai of Afghanistan, once seen as a heroic US ally, might have been involved in rigging his victory this August. Many Democrats in Congress now argue that the United States should scale back its commitment to Afghanistan. But a leaked assessment by Stanley McChrystal, the top US general in Afghanistan, saying that the United States risks losing the war without more troops has put Obama in a bind.

Representative James P. McGovern, a Worcester Democrat who was among the first to oppose a troop increase in Afghanistan, said the election fraud allegations provide the “perfect opportunity to pivot to an alternative policy.’’

“The realities are different than they were a year ago,’’ said McGovern. “The president is under significant pressure . . . Kerry is advocating some breathing room.’’

Kerry and Obama first met at a Chicago fund-raiser in 2004, after Kerry had clinched the Democratic nomination for president and Obama was a little-known state politician vying for a US Senate seat. The next day, they both campaigned at a steel plant together, after Louis Susman, a top Democratic fund-raiser, told Kerry that Obama was a rising political star. Kerry decided to give him a platform to speak at the Democratic National Convention in Boston and Obama wowed the nation with his keynote address, which launched his rise on the national stage.

Both senators served on the Senate Foreign Relations Committee, Kerry as an elder statesman and Obama as an eager freshman. Both argued that Afghanistan, not Iraq, was the central front in the war on terror and the Bush administration had made a catastrophic mistake to divert troops from there.

Kerry’s stump speech in 2004 accused President Bush of taking his eyes off the ball in Afghanistan. But privately aides say that Kerry had long been skeptical about sweeping US pledges to remake Afghanistan, a country famous for bleeding invading armies dry, as he had seen insurgent fighters do in Vietnam.

“In 2004, in presidential debate preparation, he was very cautious about how big a commitment you make to Afghanistan beyond dealing with the dangers that could project themselves beyond the country,’’ said the former aide.

In 2007, Kerry called for 5,000 elite Special Forces troops to be sent to Afghanistan.

“General Dan McNeill, who commands NATO forces in Afghanistan, has asked for 5,000 more troops, and we should make sure he gets them,’’ Kerry said in a speech at Johns Hopkins University. “This will take years, but we can’t afford to fail.’’

Obama gave a similar message during his own presidential campaign, bolstering his national security credentials by pledging to redirect the war effort from Iraq to Afghanistan. Once Obama took office, he ordered more troops to Afghanistan with little opposition in Congress.

At the time Kerry avoided Vietnam analogies, saying that Vietnam was never a direct threat to the United States, while “the exact opposite is true in Afghanistan with Al Qaeda.’’

But this week, Kerry made reference to Vietnam in his plea for time to reexamine the policy. “We went through years and years [during the Vietnam War] of [General William] Westmoreland and President Johnson saying ‘we need more troops’ without ever examining the underlying assumptions,’’ he said.

After years of warning that the United States was running out of time in Afghanistan, Kerry seemed to suggest that it may be too late to turn the tide with more troops. “That is the question,’’ he said. “I think it is scandalous the way Afghanistan has been treated for seven years.’’

Kerry said he plans to make his decision about how to proceed after his trip to Afghanistan and after holding a series of hearings, including one examining whether narrowly tailored strikes on terrorists would produce better results than a broad counterinsurgency campaign.

When asked whether those who strongly supported the military mission in Afghanistan should worry about appearing weak for wanting to change the strategy now, Kerry said: “If you put troops in harm’s way for seven years irresponsibly, that is weak. It is also craven.’’