A culture clash in North End 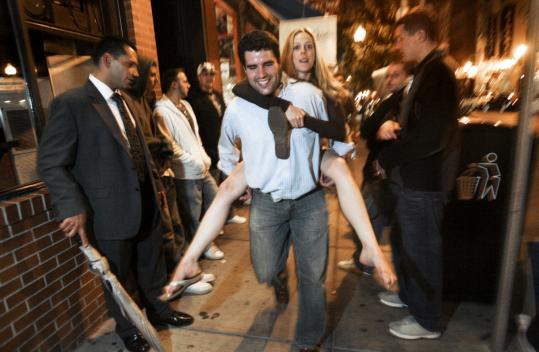 When the Central Artery came down five years ago, reconnecting the North End to the rest of Boston, residents hailed the improvements: more light and air, welcoming new parks, and a flood of tourists from Faneuil Hall and Quincy Market, along with visitors from other city neighborhoods who came to eat, drink, and shop.

Now some North Enders fear the influx has hurt more than it has helped.

Alarmed by a burgeoning late-night bar scene, and businesses seeking more outdoor seating and later hours, concerned residents are fighting to contain the drinking and carousing. In recent months, they have fended off two new outdoor patios slated for Salem Street restaurants, bristled at a deli’s proposal to sell takeout until 4 a.m., and criticized the owners of a new beer and wine shop for reneging on their pledge to sell groceries.

Underlying the tension is a fundamental struggle over what the historic neighborhood will become: a late-night playground for 20-somethings, or a haven for families like those who have lived there for centuries.

“It’s great to live in a neighborhood with an active street life, but you don’t want to get to the point where the activity is so excessive, people don’t want to live there anymore,’’ said Matt Conti, a neighborhood council member whose six-month-old website, northendwaterfront.com, keeps residents informed.

Compact and densely populated, with some 12,000 residents in less than 2 square miles, the North End was mostly Italian for much of the last century. Its narrow streets are still lined with family-owned cafes and bakeries; elderly ladies still walk to Mass every morning. The highway that once cut it off from the city helped preserve its traditions, limiting the interest and influence of outsiders. In its absence, the pace of change accelerated. Young professionals settled into high-end condos, college students grabbed up more affordable apartments, and new boutiques opened to cater to their interests.

With 89 bars and restaurants serving alcohol and 11 stores selling it, the neighborhood is more awash in liquor than any other corner of the city, according to the North End/Waterfront Residents Association. A younger crowd has gravitated to its upscale bars and restaurants, some of which serve drinks and food until 1 or 2 a.m. Meanwhile, house parties thrown by college students rage into the wee hours - in the first half of September, Boston police had received 16 calls about loud parties - and a 24-hour bakery, Bova’s, pulls in hungry revelers after bars in other neighborhoods close.

“When I went to Northeastern, I didn’t like to walk across that area into the North End,’’ said Lisa Chang, 28, whose Hanover Street clothing store, Lit, opened last month and targets fashionable 20-somethings. “Now, kids are hanging out on the Greenway, and it’s brought a huge amount of traffic.’’

The neighborhood’s nightlife, along with its relative affordability and close proximity to campus, accounts for its appeal to students, said Christopher Gray, 21, a Suffolk University junior who lives on Salem Street.

“The streets are always packed with people, and it definitely feels more upbeat, more vibrant, than Beacon Hill,’’ he said.

On a recent morning on Parmenter Street, traffic paused as a Ketel One Vodka truck backed up to make a delivery. “Welcome to the North End, the greatest place on earth,’’ said a message chalked on a Coors Light sandwich board outside a Salem Street market, where fresh ricotta cheese and homemade gnocchi shared space with bottles of Peroni, an Italian beer.

Some restaurant owners say they have been unfairly blamed for noise and litter caused by college students. Boston police Captain Bernie O’Rourke confirmed that students, mostly from Suffolk and Emerson College, cause most of the problems reported, not patrons at bars.

But some residents say the bars are partly responsible, for ramping up night life in a way that makes the North End irresistible to students and less enjoyable for other residents.

“People used to stroll on Hanover and Salem streets in the evening, to meet up with neighbors and talk, and watch the visitors, who included a lot of families,’’ said David Kubiak, a leader of the residents association and a North End resident for 25 years. “It was a pleasant experience to be there, and that’s no longer the case.’’

Large and active, with more than 300 members, the North End/Waterfront Residents Association has drawn energy from the growing number of families with young children settling in the neighborhood, said Mark Paul, the group’s president. In its role as an adviser to the city licensing board, it has pressed to limit business hours to 11 p.m. during the week and midnight on weekends, and it has had much success. Nick Varano, owner of Nick’s Deli on Cross Street, recently withdrew a plan to offer takeout until 4 a.m. after residents rallied against it.

Not everyone sees reason to resist. “Boston is crippled by our post-Puritan trappings, and we should be embracing life after midnight, not hobbling it,’’ commented one reader of Conti’s blog. Another, Brian Brandt, scoffed at the uproar. “[P]anic over available liquor reaching some kind of cosmic threshold is hogwash,’’ he wrote. “If the sales are there, the market is there.’’

To Frank De Pasquale, the owner of seven North End businesses including Bricco, one of its hottest restaurants, where pizza is served until 2 a.m., the sparring is an affront to his attempts to be neighborly. He said his employees sweep sidewalks, police the area around his businesses, and send food to police and firefighters.

“Every time the residents ask for a donation for what they’re doing, the businesses step up to the plate,’’ he said. “But whenever we go in front of the resident boards, it’s always negative. It’s always to take something away from us, never to give.’’

If residents wanted silent nights, he said, they should have moved to Dover or Marblehead.