Veil lifts on a trove of WWII treasures 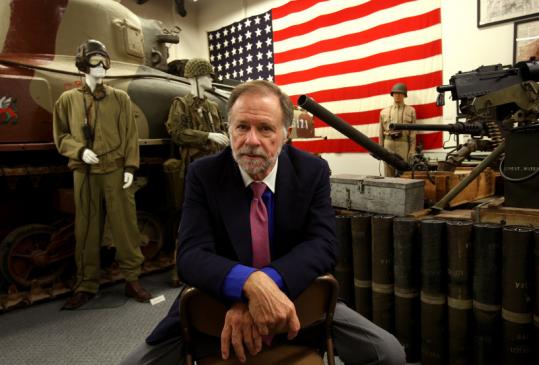 World War II ended 64 years ago, but it comes to life every time Kenneth Rendell turns on the lights inside a squat, nondescript building in Natick. Amid the glitz of nearby shopping centers, the exterior is purposely plain to protect the anonymity of the place and its treasure - an evocative and jaw-dropping collection of more than 6,000 wartime artifacts Rendell has gathered over four decades.

For eight years, the Museum of World War II has been a preserve open only to a circle of Rendell acquaintances, historians, and military veterans or enthusiasts.

Within its walls, the museum houses a section of the sofa that Adolf Hitler and Eva Braun committed suicide on, silicon likenesses of the period’s major figures outfitted in their actual uniforms, a Sherman tank, and a trove of historically significant letters and documents, including the complete plans for the invasion of Normandy and a draft of the 1938 Munich Agreement, with Hitler’s handwritten changes.

No less an authority than Phil Reed, a former curator at Britain’s Imperial War Museum, has said it “simply has no equal.’’

Admission is free but by invitation or appointment only. The museum may be the capstone of a career that has earned Rendell international renown as a collector, dealer, and authenticator of historic artifacts, yet he has discouraged publicity for his masterpiece . . . until now.

With the publication of his new book, “World War II: Saving the Reality,’’ a boxed volume that re-creates many of the museum’s most precious items, Rendell is loosening up and expanding the hours of operation.

“This is literally the first time I’ve done anything about having more people coming here. I mean, we’ve kept this hidden; there’s no name on it even,’’ he said.

The museum still won’t admit walk-ups or anyone under age 18, however, and appointments must be scheduled by telephone or through the museum’s website.

Contemplating his legacy, Rendell, now 66, is also in the conceptual stage of plans to build a larger facility that he would open to the general public.

In a career that has taken him around the world, Rendell has bought, sold, and built fabulous collections of letters, literary and musical manuscripts, memorabilia, and precious artifacts. His wife, former Boston television reporter Shirley McNerney Rendell, is also his partner in a business that has served wealthy clients ranging from Bill Gates, Queen Elizabeth, and Malcolm Forbes, to Armand Hammer, the Kennedy family, and numerous universities and museums.

The Natick museum is very much an extension of its creator and his passion for the subject, which he calls “the biggest psychological drama of the 20th century.’’

Rendell said his intent is to describe the unvarnished reality of the war.

“History is not how you wish it had been, it’s the way it actually was,’’ Rendell said during a long interview in his museum office, where his desk sits amid a library-size collection of World War II documents, books, and artifacts, including the suitcase Hermann Goring brought to Spandau prison and a portrait of Winston Churchill by Dwight D. Eisenhower.

“You had really good people and actions, and you had really bad,’’ he said. “You had everything, and it involved everybody. It was just an incredible event.’’

The items in the collection are not the sort bought on , but the acquisitions of a collector-dealer who exposed fakes (the bogus Hitler and Jack the Ripper diaries) and wrote the standard book on forgery detection. Verifying the chain of custody, known in the trade as provenance, is essential.

For example, Rendell said he purchased the draft of the Munich Agreement from the son of Neville Henderson, the British ambassador who attended the proceedings and saved the document, which had been left on the table after the final version was typed up. Henderson wrote his son a letter explaining how he came to possess it, Rendell said. He said he bought the piece of the Hitler suicide sofa from the son of an American soldier pictured in Life magazine next to the sofa with other GIs before they cut it up for souvenirs.

Rendell designed the 10,000-square-foot museum, meticulously laid out the chronological display, and narrates the 3 1/2-hour audio tour. Walls divide the floorspace into 30 subject areas, such as the rise of Nazism, Winston Churchill, Resistance, the Holocaust, Pearl Harbor, D-day, the atomic bomb, and the war trials. Especially valuable pieces are in museum cases, but most are on the walls and floor. Rendell’s spare written captions describe the exhibits dispassionately, without the spin of politics or political correctness.

“You try to be sensitive,’’ he said. “We have a lot of people who come here who are veterans who glorify what they did, and that’s just fine because it’s not up to me to have an opinion of how they dealt with or how they deal with what happened. But I don’t glorify war here, and I don’t personally see it that way at all.’’

Rendell said he has met many veterans who, late into their lives, struggled with the memories and the trauma of war. One was Danny Thomas of Arlington, Texas, whom Rendell met on a trip to Iwo Jima. “We were at the top of [Mount] Suribachi when I heard this guy talking,’’ Rendell said. “He said he had come back hoping that he could get a few nights sleep without nightmares before he died.’’

Thomas was one of the 13 medics who survived the full monthlong battle on Iwo Jima. Rendell later invited him to speak at one of the many lectures he hosts at the Natick museum. The invitation-only events always draw a full house of 100 or so veterans and aficionados on the museum’s mailing list.

The museum and the book, Rendell’s fourth, are filled with items that tell those stories.

A telegram informing Ruth Kasai that her husband, Tom, had been wounded in France was sent to her address at an Arizona internment camp for Japanese-Americans.

There’s a mannequin of a French woman in the summer of 1944 outfitted in a wedding dress made from the reserve parachute of an American paratrooper on D-day.

A postwar letter from Miep Gies, who provided food to Anne Frank and her family as they hid in Amsterdam, closes by saying: “The Diary and Anne’s father survived. And I can tell you I am so grateful, that after the war I could give the Diary to her father and he gave it to the world and that was right.’’

The letter is among about 80 pullout reproductions of the museum’s collection of original correspondence, telegrams, propaganda posters, and postcards. All were recreated by the publisher, Whitman Publishing, on paper stock almost identical to Rendell’s originals.

The book’s removable items include:

■ The pagelong original order, carried by a radar specialist on the mission to drop the atomic bomb on Hiroshima. It appears unremarkable except for the munitions order, “Bombs: Special.’’

■ Hitler’s sketch of the eagle monument in Nuremburg, with an authenticating note by Albert Speer, his architect.

■ Letters from Eisenhower and Erwin Rommel, the opposing commanders, to their wives on the same day after the Normandy landings.

■ A mannequin of Hitler in his original brownshirt uniform. The museum has a vast collection of wartime propaganda from several nations. There is also an extensive display of uniforms and weaponry, ranging from the enormous tank, which had to be situated before the museum walls could be built, to tiny lethal gadgets carried by spies.

Rendell calls them as he sees them, and he doesn’t tolerate the political correctness of hindsight.

When a television crew once prepared to interview a Pacific veteran who had spoken at the museum, the vet was asked to move away from a propaganda poster because the producer feared viewers might be offended by its message, “Jap, You’re Next.’’

“I said: ‘[Expletive] you. That’s not what this place is about; you’re in the wrong place,’’’ Rendell recalled.

The crew shot the interview in front of the poster. The story aired, and “there were no picket lines and the world didn’t end,’’ Rendell said.