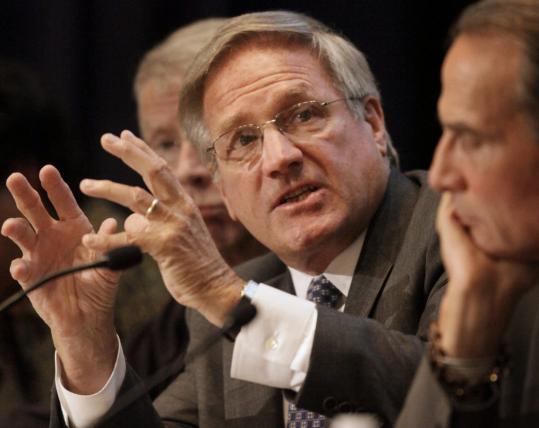 Former Massachusetts Attorney General Scott Harshbarger was chosen yesterday to oversee an internal review of ACORN, placing him in the middle of a politically charged national controversy fueled by videotapes showing counselors from the grass-roots group giving advice to a couple posing as a pimp and a prostitute.

Harshbarger said he believes the organization chose him for the national review because of a reputation to “call them like I see them.’’

Speaking several hours after the chairwoman of ACORN’s board of directors announced his appointment yesterday, the 67-year-old lawyer said he has long specialized in advising corporations, nonprofit groups, and government agencies about their practices, and he was eager to play a similar role amid the controversy surrounding the community advocacy group.

“They made it very clear that they wanted this to be done by an independent outside person or team, with a report and recommendations not only related to the specific issues, but to their management systems in general,’’ he said.

“It’s a very significant role, and I think it’s going to be very challenging. But it will also be very, very important.’’

Harshbarger, a senior counsel to the Boston office of Proskauer Rose LLP, said he did not want to prejudge the controversy.

He said the firestorm that occurred after the activist videographers received tax and housing advice for their supposed criminal enterprise from obliging ACORN counselors was “highly politically charged’’ and had had extraordinary repercussions.

The US House and Senate both voted last week to cut off ACORN’s federal funding, and the Census Bureau severed its ties with the group earlier this month. Republicans are pushing for a Justice Department investigation of the group, which was battered by accusations of falsifying voter registration forms last year.

The alleged misconduct of the employees on videotape, he said, was inexcusable. But, he added, “this is the kind of thing that can happen to any large organization, and rarely do you find the United States Senate threatening to shut it down based on the actions of a few people. It may be broader. We’ll find out.’’

Harshbarger, a Democrat, served as Massachusetts attorney general for two terms in the 1990s, ran unsuccessfully for governor, and then served as president and chief executive of the advocacy group, Common Cause.

In 2003, he was named by Governor Mitt Romney to head a panel that conducted a top-to-bottom review of the state prisons after the jailhouse slaying of the defrocked priest, John J. Geoghan, a convicted pedophile. But Harshbarger resigned in frustration two years later, saying Romney neglected the issue as he prepared for a run for president.

He is now helping to represent more than 2,000 tollpayers accusing the state of illegally diverting Massachusetts Turnpike tolls to help pay for the Big Dig.

Yesterday, Maude Hurd, chairwoman of ACORN’s board of directors, said in a statement, “We are pleased that a man of Mr. Harshbarger’s standing is going to be conducting this review. The board is very concerned to see that ACORN is able to carry out its mission of bettering low- and moderate-income communities.’’

There is no timetable for completion of the review, which the group pledged will be “aggressive, thorough, and far-reaching.’’

At the end, Harshbarger will present his report to the organization’s board and chief executive officer, Bertha Lewis.

Harshbarger would not say if he is getting paid for the review, except to say that ACORN had engaged him and his firm.

Representative Darrell Issa, a California Republican who has been among ACORN’s biggest critics, was not impressed by the investigation.

ACORN “has already been down this path before,’’ he said in a statement, arguing that an internal review last year did not succeed. “A self-run investigation is not a substitute for an independent investigation.’’

Instead, he said, Congress should conduct hearings into ACORN’s management and use of public funds.

ACORN, which says it has hundreds of thousands of members and chapters in about 75 cities, has suspended accepting new clients into its service programs for the poor - including tax preparation, housing assistance, and benefits screening - until the review is completed, though it continues its community organizing and advocacy work.