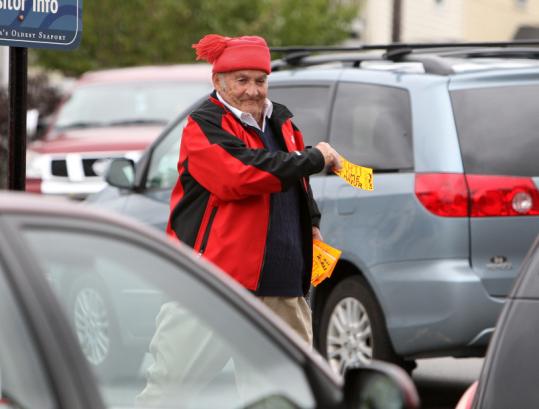 GLOUCESTER - Every two years since 1971, Daniel Ruberti has run for mayor in this North Shore fishing port, strolling the streets to collect the necessary 300 signatures and giving out handwritten “Vote Dan’’ stickers.

He has no platform to speak of, other than sticking it to the “muckety mucks,’’ as he says, and no organization or fund-raising. Getting only a handful of votes in most elections, he has been viewed by most residents and mayoral rivals as a harmless and vaguely amusing sideshow.

Until now. As the town struggles with a staggering budget crunch this year, his candidacy is forcing the city to spend some $15,000 on a preliminary election to whittle the field of three candidates to two for the November general election. It has ignited a storm of controversy over Ruberti and fury over what many view as a needless expense.

“I’m willing to pay more taxes for many things,’’ said Dan Connell, a Gloucester resident and Simmons College professor who urged Ruberti to drop out in a recent letter to the Gloucester Times, writing that the town could no longer “dismiss this biannual phenomenon as entertainment.’’ “But I’m not willing to pay for someone to indulge his vanity, and that’s what this campaign comes down to.’’

Across the state, in fact, a growing number of communities with budgets gutted by the economy are grumbling about the cost of holding low-stakes preliminary elections. A handful, including Gloucester, have turned to the Legislature for permission to scuttle them, citing the cost and the lack of truly competitive races. And while some such requests have been approved, Gloucester’s and at least one other have been rejected. And some local officials are fuming over the state’s seeming indifference to their plight.

Officials in Methuen - which spent about $32,000 this week in a preliminary election to eliminate a fringe mayoral candidate after the Legislature declined its request to cancel the election - are among them.

“In a perfect world, it’s fine, whatever,’’ said Christine Touma-Conway, the city clerk there, who, like many town officials, is frustrated at Beacon Hill’s hesitance. “But when we’ve lost $3 million in local aid, and then they won’t let us save what in essence is one employee’s salary, that’s just terrible.’’

Communities that require preliminary elections when there are a certain number of candidates must receive permission from the Legislature and governor to bypass them. Petitions in Lowell and Revere were approved, while Methuen’s and Gloucester’s were denied because both featured competitive mayoral races.

For the towns that won a reprieve, the savings have been substantial. Revere, facing a massive budget deficit, saved $50,000 by canceling its primary.

“We lost $15 million in local aid and had to lay off 49 people in city government,’’ said Edward Caulfield, mayor of Lowell, which saved an estimated $41,000. “That’s money when you’re counting nickels and dimes.’’

Many political observers say primaries serve the important functions of narrowing the slate of candidates to a manageable number and insuring that winners secure a majority of voters. Primaries also give challengers a better sense of their strengths and weaknesses, and help newcomers gain name recognition, which encourages greater participation from voters and candidates alike.

Canceling primaries because of expected low turnout, by contrast, only perpetuates problems, some observers said.

“They are just resigned to the fact,’’ said Patrick Murphy, a candidate for the Lowell City Council who lobbied to keep the primary. “There doesn’t even seem to be any hope for greater involvement. How do you put the price of democracy into a cost-benefit analysis?’’

In Gloucester, anger from tax-weary residents has turned on Ruberti. He has been skewered in letters to the local paper, and yelled at from passing cars. Earlier this month, when he was handing out stickers at a stoplight, someone called the police to complain that he was standing in the road.

“They’ve been coming after me like gangbusters,’’ said Ruberti, 78, who said numerous people have urged him to drop out of the race for the town’s financial sake. “Usually, I’m loved by everyone. But this year they are coming out of the woodwork.’’

He insists he is a viable candidate, though he also supported canceling the primary.

“I’m a sincere candidate,’’ he said, pointing to a box of handwritten campaign stickers on his dining room table as evidence. “I have no intention of withdrawing.’’