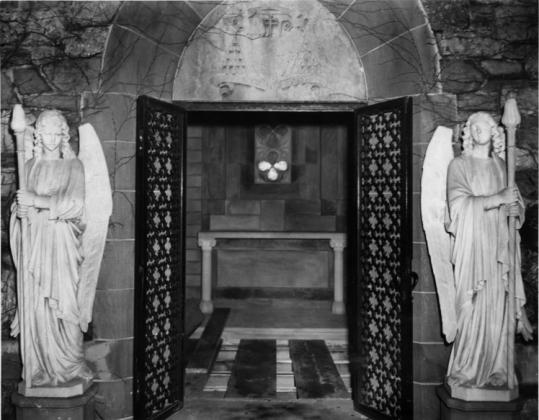 A photo taken in 1944 showed the gothic crypt at St. John's Seminary where the cardinal's remains were to rest, including an altar for Masses, boards covering the crypt where the casket was to be lowered, and guardian angels flanking the doors.
By Michael Paulson Globe Staff / September 18, 2009

The Archdiocese of Boston, writing an epilogue to one of the more colorful stories in the history of Catholic Boston, asked a court yesterday for permission to unearth the entombed body of Cardinal William H. O’Connell and relocate his remains to the grounds of a suburban prep school.

The proposed disinterment is rich with historical irony, because when O’Connell first purchased land in Brighton as a headquarters for the archdiocese, he insisted that the remains of a group of Sulpician priests be dug up and removed from the property.

Now, six decades after his death, the cardinal’s body may be exhumed from the same acreage because his own alma mater, Boston College, has insisted that the archdiocese remove the cardinal’s remains as a condition of the university’s purchase of the Brighton property.

“It is no longer possible to honor the late cardinal’s wishes relative to his burial,’’ Cardinal Sean P. O’Malley and the trustees of Boston College said in a joint filing in Suffolk Probate and Family Court yesterday. “The petitioning parties seek this court’s approval to reinter the cardinal’s remains on a site approved by the court.’’

O’Connell served as archbishop of Boston from 1907 to 1944, a period of extraordinary growth, in size and influence, for the Catholic population of Boston. He was a powerful and influential prelate who was respected, if not always loved, but his reputation has been complicated in the years since his death by two biographies that have taken critical looks at his lengthy tenure.

O’Connell, as a Catholic priest, had no children, and his multiple siblings and nieces and nephews are all deceased. His surviving relatives - 30 descendants of his brothers and sisters - are divided over disposition of his remains, with some reluctant to see the body moved and others less concerned by the proposal.

The saga touches on many of the most significant episodes of local Catholic history, including not only the storied career of O’Connell, who was at once one of the most powerful and controversial churchmen in Boston, but also the sexual abuse crisis, because the land on which he was buried was sold to pay settlements to victims.

There is even a Kennedy connection: O’Connell’s most prominent living relative is his grandnephew, Paul G. Kirk, a onetime aide to Senator Edward M. Kennedy who became chairman of the Democratic National Committee.

Paul Kirk did not return a call seeking comment yesterday. His brother, Centerville attorney Edward W. Kirk, has been the leading opponent of moving the body of the late cardinal. In a brief interview yesterday, Edward Kirk would say only that “we want to explore every opportunity for a satisfactory resolution of this by agreement.’’

O’Connell, the 11th child born to a family of Irish immigrants in Lowell, was Boston’s first cardinal, and he presided over the church during atime of transformation in the way Catholics were seen and treated in Boston.

“The Catholic community was coming into its own, politically and socially, and he both symbolized that and, in some ways, made it possible,’’ said O’Connell biographer James M. O’Toole, a Boston College history professor. “He was a comparable figure to the political giants of the age - James Michael Curley and Honey Fitz - and he turned the position of archbishop of Boston into that of a public figure, so that what he had to say on any subject was news, simply because he said it.’’

O’Connell had his quirks. He owned a succession of black poodles that he would walk along the Commonwealth Avenue Mall. And he had his foibles. He was criticized during his tenure for failing to act against two priests, one of them his nephew, who had secretly married.

Archdiocesan officials say that they are obligated to try to relocate the remains as part of the 2004 agreement with Boston College, but that they will do everything they can to honor O’Connell.

They chose St. Sebastian’s School as the new site for his grave because O’Connell, who was a champion of Catholic education, founded the school in Newton in 1941. (The school moved to Needham in 1982.)

“The issue for the archdiocese is about making sure that we appropriately provide a permanent resting place befitting a cardinal and priest of the church and to fulfill the conditions of the sale to Boston College,’’ said archdiocesan spokesman Terrence C. Donilon. “We believe that in the end we will have provided a more appropriate resting place that honors and respects the late cardinal and his family.’’

Donilon said that, if the archdiocese is allowed to move the body, the church will construct a permanent memorial to the cardinal at St. John’s Seminary and will establish a scholarship in the cardinal’s name at St. Sebastian’s.

O’Connell’s legacy is still treasured at St. Sebastian’s, an elite Catholic private school with 360 students, all boys, in grades 7 through 12. The cardinal’s portrait hangs in the school’s dining room, and the school bestows an annual medal in his name.

“If the cardinal is to be disinterred, we would welcome him here,’’ said William L. Burke III, the school’s headmaster.

O’Connell’s will is quite explicit about his wishes; he wrote, “I direct that my funeral obsequies be as simple as possible, and that I be buried in the Chapel of the Blessed Virgin Mary on the grounds of St. John’s Seminary, Brighton, Massachusetts.’’

But in fact, his funeral was quite elaborate, and that chapel, which O’Connell constructed to house his remains, is on land that the seminary sold to the archdiocese and the archdiocese then sold to Boston College.

“Given that the cardinal’s wish to be buried on the grounds of St. John’s Seminary could no longer be honored, the archdiocese and Boston College felt it best that he be reinterred at an archdiocesan site,’’ said Jack Dunn, a spokesman for Boston College, who added that the college has proposed building a parking garage near the site of the tomb. “Out of respect for the cardinal, we do not believe that it is appropriate to have a grave site on a college campus, especially at a site in close proximity to a proposed parking facility.’’

It is not clear whether the archdiocese would be able to move the tomb itself or would have to remove the body from beneath the tomb while leaving the structure intact, because the tomb is arguably of some historic significance and has attracted the attention of the Massachusetts Historical Commission.