US immigration agency branches out 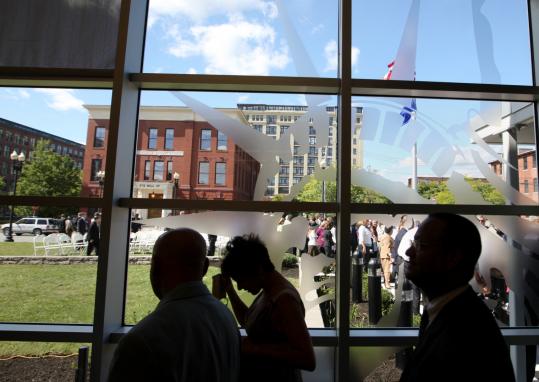 Crowds gathered inside and out for the opening of the US Citizenship and Immigration Services office in Lawrence yesterday. (Jonathan Wiggs/ Globe Staff)
By Maria Sacchetti Globe Staff / September 16, 2009

US officials opened the state’s only field office outside Boston where immigrants in Northern, Central, and Western Massachusetts can apply for work permits, green cards, citizenship, and other benefits.

Denis Riordan, the agency’s district director, said he hoped that the Lawrence office would allow the agency to reach more immigrants.

“We are celebrating both the past and the future today,’’ he told dozens of federal, state and city officials at the ribbon cutting ceremony. “It has been said that home is not where you live; home is where you belong, and USCIS belongs in Lawrence.’’

The unveiling in Massachusetts, where as many as 290,000 immigrants are eligible to become citizens, arrived at a daunting time for the agency: Projected revenues are down in the state and nationwide, and fees are under review after a sharp increase two years ago.

“Everything’s on the table,’’ said Michael Aytes, acting deputy director of Citizenship and Immigration Services in Washington, who traveled to Lawrence for the event. “We’d love to charge less money, but the question is can you deliver the level of service that these folks need at that lower cost, or are you charging them a lower fee and then making them pay through your inability to be able to deliver the service they need?’’

Eva Millona, executive director of the Massachusetts Immigrant and Refugee Advocacy Coalition, said in an interview that it would help to reduce fees so that more immigrants could afford to apply for benefits. “The fees do present a barrier to many people,’’ she said.

The Associated Press reported yesterday that the federal government is collecting $282 million less than expected from the fee increases this budget year, which ends Sept. 30, possibly as a result of the battered economy.

The decision on fees in the coming months will have a direct impact on the new building unveiled yesterday in Lawrence, a former mill city about 30 miles north of Boston.

The city is nearly 70 percent Latino, the highest in the state; 35 percent of its residents are foreign-born.

Almost two years ago, immigrants in Massachusetts could wait as long as 18 months to become US citizens, for instance. But federal officials said the processing rate is now one of the fastest, if not the fastest, in the agency’s history, making it an excellent time to apply.

In Massachusetts, it takes an average of 3.6 months to get a green card and 3.4 months to become a US citizen, Riordan said.

The new office will serve immigrants from Essex County to the Berkshires, including 13,000 applicants in the first year alone.

Previously, immigrants had to journey 30 miles to the John F. Kennedy building in downtown Boston.

Now they can take their citizenship tests, apply for legal residency, and get fingerprinted at 2 Mill St. in Lawrence. The $15 million office, which employs 38 people, is a cheery red-brick building with the Statue of Liberty etched in the glass out front, a grassy lawn dotted with flowers, and a waiting room with little couches and books set aside for children.

The city, with its hulking textile mills and smokestacks, was founded in the 1840s and became, for a time, one of the largest suppliers of textiles in the world, said Barbara Brown, executive director of the Lawrence History Center. The immigrant influx began with Europeans and continued in recent decades with large waves from Latin America, particularly the Dominican Republic.

After the ribbon cutting on the new building, officials walked several blocks away to the history center, to swear in 15 new US citizens in the courtyard of one of the city’s oldest buildings, the former Essex Co.

There, immigrants and their grandchildren, or great-grandchildren, of many backgrounds, from Irish and Polish to Albanian and Russian, wiped away tears and reminisced about the sacrifices their families made to bring them to the United States. US District Judge Nancy Gertner presided over the ceremony.

Among them were Eartha Dengler, 87, a German immigrant who fled war-torn Europe and founded the Lawrence immigrant archives, housed at the history center, to preserve families’ stories.

Dengler, struggling to walk with a cane, beamed at the crowd and later insisted on climbing the stairs at the Lawrence History Center to see every corner.

“It was hard in the beginning, but we made it,’’ she said, eyes twinkling. For the new citizens, there was joy but also bewilderment and uncertainty. Now they can vote, serve on juries, and live here forever.

Loise Mwangi, 37, a worker at the state Department of Developmental Services from Kenya, broke into a wide smile after hearing a recorded welcome from President Obama. His late father was from Kenya.