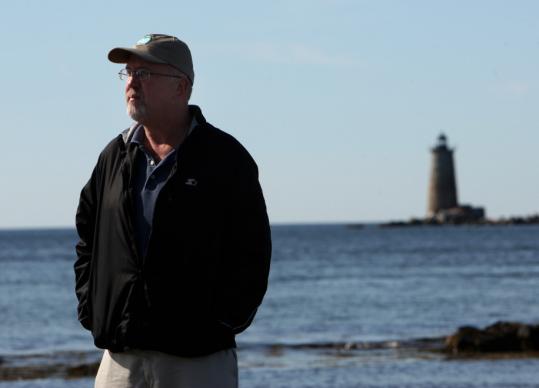 Jeremy D’Entremont, shown near Whaleback Light in Kittery Point, Maine, said selling a lighthouse to private owners is “a bit of a roll of the dice.’’ (Joanne Rathe/ Globe Staff)
By Brian MacQuarrie Globe Staff / September 15, 2009

When camera-toting tourists see a New England lighthouse, they see a cherished piece of maritime history, a romantic beacon that has guided ships and sailors to safe harbor for decades or centuries.

But when federal officials see a lighthouse, they often see an outdated, money-thirsty sponge whose costly maintenance outweighs any nostalgic arguments to keep it on the government tab.

For nine years, the federal government has been trying to unload these landmarks, but has been slowed by contamination on the sites as well as difficult access to offshore lights and maintenance costs. Now, Minot’s Ledge Light, a 114-foot granite tower off Scituate that has warned mariners of wreck-laden rocks for 149 years, is one of the latest beacons to be put on the block.

It’s a matter, the Coast Guard says, of dollars and cents.

“On average, we’re talking about a cost of $20,000 per year for general maintenance for a lighthouse,’’ said Georges Bockstael, a supervisor in the Coast Guard’s civil engineering team. “You’re diverting not just funds, but hours, away from other missions that are probably, in many ways, more servicing to the community.’’

Once critical to all navigation, lighthouses have been supplanted by technological advances and are now primarily a help to smaller fishing boats and recreational vessels, whose captains find comfort in this visual confirmation of their location.

Advocacy groups also see lighthouses as an integral, irreplaceable part of the nation’s heritage and are concerned that the federal government’s effort to shed the costly structures could leave them in damaging private hands. The government’s first choice is to transfer them to a nonprofit group at no cost, where the lights would be subject to strict preservation regulations. But if no suitable steward is found, the lighthouse could be sold to a private bidder at auction.

“It’s a bit of a roll of the dice,’’ said Jeremy D’Entremont, historian for the American Lighthouse Foundation. “The buyer probably has the best of intentions, but down the road, it’s tough to tell if succeeding generations will have that same interest.’’

State historic preservation agencies do not have to be consulted about renovation work if lighthouses are sold privately, Bockstael said. Although the Coast Guard retains ownership of the optics - the actual light in a lighthouse - the new proprietor can make renovations elsewhere on the structure that might not follow the original design.

Michael Gabriel, an attorney from Nevada, has shown just what an eclectic fate can await these buildings. Gabriel, who bought Borden Flats Light in Fall River for $55,000 in December, plans to convert the 1881 cast-iron structure into a residence and microbrewery. He has similar plans for two other lighthouses that he purchased in Maryland and Delaware.

Gabriel estimated that restoring Borden Flats will cost between $100,000 and $150,000. But unlike preservationists who are concerned that private owners will alter lighthouses for the worse, Gabriel argues that his stewardship will be a marked improvement over Coast Guard management.

“The real problem is the government gutted it,’’ Gabriel said. “The biggest cost of the restoration is putting in what the government took out - kitchens, bathrooms, electrical, and the plumbing. Nobody can explain why they did that.’’

So far, four lighthouses in New England have been sold privately at auction, according to the US General Services Administration - Borden Flats, Hog Island Shoal in Rhode Island, and Goose Rocks and Lubec Channel in Maine. Eight lighthouses, including Baker’s Island in Salem and Straitsmouth Island in Rockport, have been conveyed to nonprofit stewards at no cost.

The program, created by the National Historic Lighthouse Preservation Act, is designed to transfer the vast majority of lighthouses from Coast Guard ownership, said Bockstael, who leads the Coast Guard’s real-property unit for much of the northeastern United States. The speed of the program has been affected by contamination at some land-based lighthouses, and by the same maintenance costs that have proved so challenging for the Coast Guard.

A transfer or sale can yield big savings, particularly in the case of offshore lights such as Minot’s Ledge, said Chief Boatswain’s Mate Shawn Brule of the Coast Guard, who commands the Boston-based aids-to-navigation team.

“Reroofing and painting, we do really well. But we’re limited by manpower,’’ Brule said. For significant repair work at a place like Minot’s Ledge, he added, “Just to mobilize a civilian tug and barge could run anywhere from $25,000 to $100,000.’’

Nonprofit groups, including municipal officials in Scituate and Cohasset, have until Sept. 30 to submit a letter of interest in Minot’s Ledge. Applicants will be offered a tour of the light, which in itself can be a daunting task for anyone afraid of scaling a 30-foot ladder to the structure. Interested parties then would have 90 days to submit a management plan to the National Park Service, which can choose a steward.

But if no one comes forward, the process could move to private auction. “That’s certainly within the realm of the process that we normally follow,’’ said Paula Santangelo, the New England spokeswoman for the General Services Administration.

David Ball, president of the Scituate Historical Society, said his group might submit a letter of interest. Minot’s Ledge, he said, “is one of the key lights marking the beginning of the entrance to Boston Harbor. It just has so much historical significance.’’ Selectmen in Scituate and Cohasset also have met jointly to discuss the future of the light.

As the program continues across the country, preservationists are watching closely.

“We should be concerned,’’ said Bob Trapani, executive director of the American Lighthouse Foundation. “We should be very mindful that the decisions made or not made today will have an impact on the future of our lighthouses.’’

“They’re probably the closest thing we have in America to Europe’s castles,’’ said James Hyland, president of the Lighthouse Preservation Society. “There’s the romance, the shipwrecks, the ghost stories, the pirate treasures, and their roles in the wars. The history of the lighthouse in America is just full of fascinating stories.’’