Paying tribute to a Masonic icon 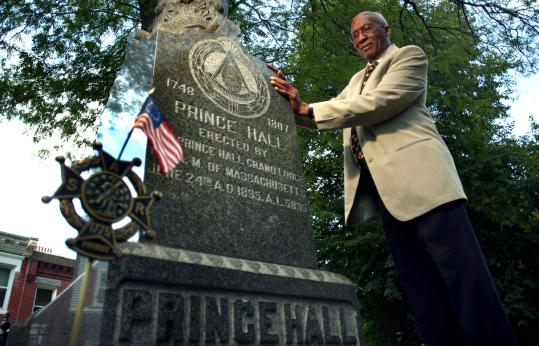 The Prince Hall Memorial will not bear its namesake’s image when it is erected on Cambridge Common this November. No pictures of the indentured servant-turned-abolitionist can be found, nor much description on which to base an artist’s depiction.

And while Prince Hall’s contributions to American history and the antislavery movement are familiar to historians and members of the Masonic lodge he created, he is not a well-known figure.

Members of the Friends of Prince Hall Memorial Fund committee hope that will change. They plan to hold a dedication ceremony on Cambridge Common today in honor of Hall’s birth and oversee the pouring of the foundation where the memorial is slated to stand. Although Hall’s birthday remains unknown, some historians place it on Sept. 12, 1735.

“He was the first civil rights organizer in America,’’ said Red T. Mitchell Jr., a committee member who also is a Prince Hall Mason, as was his father.

Not much is known about Hall’s early life, but it is believed that he arrived in Boston from Africa in the mid-1700s at the age of 12 and that for 21 years he worked as an indentured servant for William Hall, who owned a tanning and leather dressing business, said Morgan James Peters, an associate professor of English and African-Ameri can Studies at the University of Massachusetts at Dartmouth, who in 2006 authored the article, “Prince Hall & The Roots of Black Nationalism.’’ Peters is also the interim grand historian of the Prince Hall Grand Lodge of Massachusetts.

William Hall emancipated Hall several months before the Boston Massacre of 1770, when British soldiers killed several civilians and help spark the American Revolution. Hall started his own leather business and worked as a barber and caterer. He was self-educated through books, especially those on philosophy, and through friendships with intellectuals, Peters said.

After he was freed, Hall spoke against slavery and petitioned the Legislature to abolish the practice. Hall is believed to have met General George Washington on what is now Cambridge Common while Washington was organizing the Continental Army, and implored him to allow blacks to serve.

Hall established African Lodge 1 in 1776, the first such Masonic lodge for blacks in America. He then received a charter from the Grand Lodge of England, which eventually led to the establishment of Prince Hall Grand Lodge. He died in his early 70s, and was buried in 1807 on Copp’s Hill in the North End.

There are about 47 Prince Hall Grand Lodges throughout the country and some 300,000 members.

Mayor E. Denise Simmons of Cambridge started the push for a monument for Hall in her city while she was a councilor in 2005.

“I was putting together my own family history. My grandfather was a Prince Hall Mason, and I began to research the significance of the organization,’’ she said. “As I got more interested in my grandfather as a mason, I began to wonder why nobody had ever installed a monument to Prince Hall, a man who had done such tremendous work.’’

The Friends Committee is seeking to raise $100,000 for the cost of the memorial and has collected about $60,000 in private donations.

Ted Clausen, the Cambridge artist who will create the memorial, said that he didn’t know who Prince Hall was when he heard about the project but that after 45 minutes of research, “My first thought was, ‘Why don’t I know more about this man?’ What we have here is a founding father of the civil rights movement and Free Black Masonry.’’

Clausen said that in creating the memorial, he wanted to give others the same sense of discovery.

Five granite stones will be cut in the fashion of 18th- and 19th-century tombstones. They will be 6 feet tall and 27 inches wide, designed in relation to the human body. The stones will form a circle, and quotes from civil rights leaders will be etched on the rough granite outside finish.

Clausen called on juniors at Community Charter School of Cambridge to research quotes. “They worked hard and long and submitted to me a group of quotes, some of which we will use on the memorial,’’ he said. “One of my definitions of public art is to get the public in it.’’

Excerpts from Hall’s speeches and documents he signed and submitted to the Legislature will be etched on the mirror-like inside finish. Clausen said he wants readers to see their reflection as they read Hall’s words. Among Hall’s comments are, “For if I love a man for the sake of the image of God which is on him, I must love all, for he made all, and upholds all . . . let them be of what colour or nation they may, yea even our very enemies.’’

Hall is considered a foundational voice for the likes of Martin Luther King Jr. and Frederick Douglass.

Clausen typically uses text in his works, as with the Vendome Firefighters Memorial in Boston, a 31-foot-long granite arc, and the Korean War Memorial in Somerville, a 53-foot diameter semicircle of quotes on granite and bronze.

Mitchell said the Hall memorial will be a lasting educational tool.

“A lot of people think this monument is just about Prince Hall, but it represents more, the start of emancipation, and the first blacks to truly call themselves African-Americans,’’ he said. “We’re talking about those patriots of African descent who helped lay the foundation of our nation during the Revolutionary period.’’